Grab a sneak peek of “Highs, Lows and Di Canios”, as Sid, Dave and Ex look back at the nervy run-in to the 96-97 season – when two new arrivals rescued the Irons from certain relegation.​ 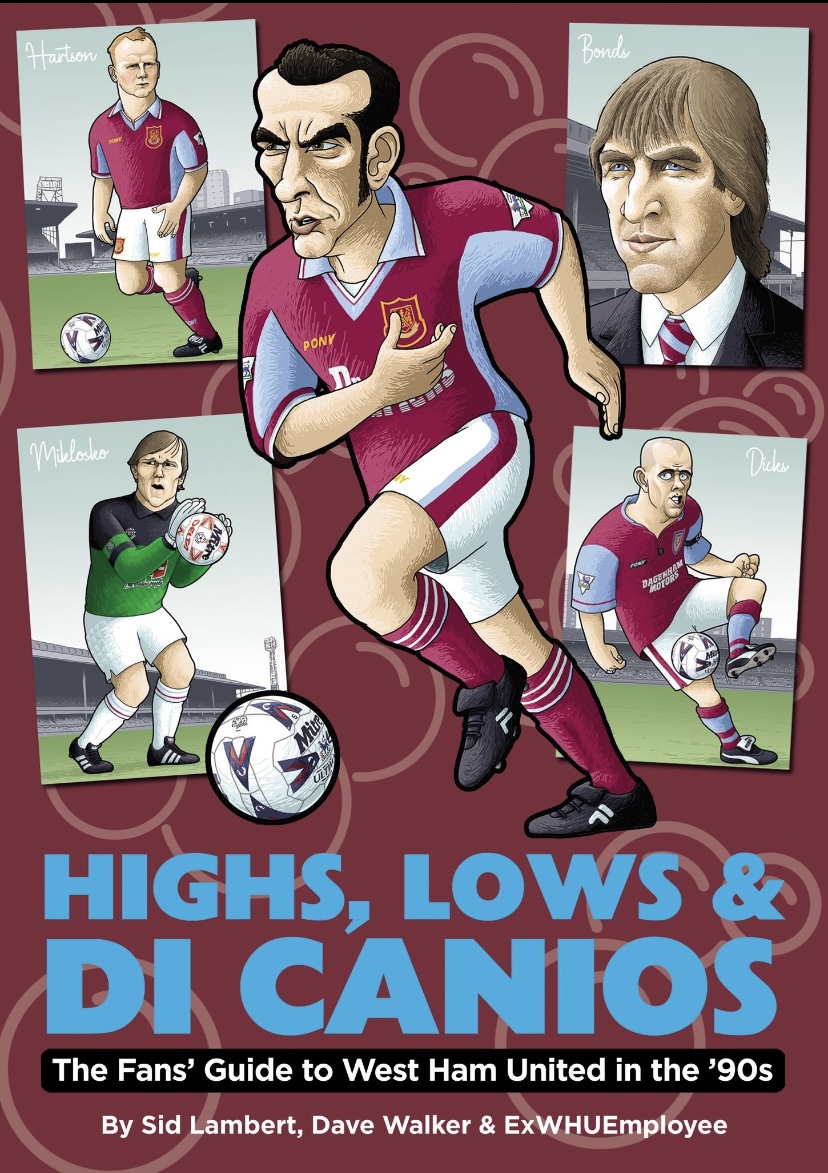 When Hartson and Kitson came to the Hammers' rescue

The new arrivals made their eagerly-awaited home debut on Monday Night Football at home to Spurs. They were a classic little-and-large duo. Hartson, all massive shoulders and thighs, had the build of a prop forward rather than a professional footballer. Meanwhile Kitson, with his curtains and coy smile, resembled the former member of a boyband who left due to “creative differences”.

The heavens opened that night at Upton Park. To this day I can’t remember worse conditions at the Boleyn. Torrential rain, puddles on the pitch and gale-force winds weren’t conducive to free-flowing passing. This was exactly the sort of game which tested your heart and your strength of character. West Ham were equal to both.

We trailed to a Teddy Sheringham strike before a powerful Julian Dicks header brought us level. In an instant the game turned. Stan Lazaridis forced a smart save from Ian Walker, before the new boys made their mark. Lazaridis’ corner was caught in the swirling wind and Kitson nodded into the net about 2cm from goal. Darren Anderton’s equaliser didn’t derail us. Before half-time a Dicks free-kick was met brilliantly by the diving head of Hartson, who had bullied Sol Campbell from the first minute. The Big Man celebrated by kissing the badge to the delight of his new adoring public.

Even when David Howells equalised with a smart finish after the break, still we believed. In the dying minutes Hartson was brought down inside the penalty area and the referee pointed to the spot. Upton Park held its breath. The fate of the match, and potentially our season, rested on the shoulders of Julian Dicks. It was never in doubt. The Terminator hit potentially the hardest penalty in the history of association football, cannoning of the crossbar past the terrified Spurs keeper. God only knows what would have happened if the net hadn’t been there to stop the ball. It would probably be on NASA’s radar as we speak, a lone Mitre Delta circling Earth’s atmosphere and destroying everything in its path.

From then on, we were a completely different proposition. Our next home game was against Ruud Gullit’s Chelsea. The Dutchman, who had tormented us the previous season, had taken over from new England boss Glenn Hoddle and spent big bucks to move Chelsea into the top six. A rare mistake from Ian Bishop allowed Gianfranco Zola to set up Gianluca Vialli for the opener, before another Julian Dicks penalty brought us level.

Then came a brief moment of redemption for Iain Dowie, drafted in as cover for the absent Hartson. A deft flick-on found Kitson steaming into space and he smashed a left foot shot in off the post to put us ahead. Sub Mark Hughes levelled in the second half and in injury-time we would have gladly settled for a point. With the seconds ticking down, Michael Hughes swung in a corner, Dowie rose like a salmon on a trampoline to power it goalwards and there was Paul Kitson to nod it over the line. East London erupted in delight.

In the space of just three weeks we had turned our season on its head. We had gone from a timid, toothless team that looked relegation certainties, to a team scrapping for every bastard inch on the football pitch. And we had beaten two of our biggest rivals in the process.

Harry’s big-money gamble on Hartson and Kitson had already worked wonders. But the defining image of the season so far was Julian Dicks, his freshly-shaven head and ripped shirt collar, screaming with delight after the last-minute winner against Chelsea.

The greatest of Great Escapes was well and truly on.

EX: That 4-3 win over Spurs still ranks as one of my favourite ever games at Upton Park. I can still remember how cold and wet it was, but our new signings gave the whole place a lift. John Hartson kissing the badge after scoring his first goal for the club helped cement his status as a new hero.

DAVE: The intensity of that game against Tottenham will live with me forever and that win was the turning point for us. Hartson and Kitson changed everything when they came in. Suddenly the players grew in self-belief, the fans were rejuvenated and with goals back in the side, I genuinely felt that we would be safe that season. Our fortunes had changed overnight.

EX: That Chelsea team had Zola, who would become one of the all-time Premier League greats, but he was overshadowed by Julian Dicks that night. He summed up that bulldog spirit, never-say-die attitude that being club captain of West Ham is all about. Everyone at school knew Julian was my favourite player, and now they could see why. He was absolutely amazing and this was when he should have won an England cap. The fact he didn’t deprived the country of someone who could have been a cult hero.

DAVE: The win against Chelsea that followed was a big statement and you just got the feeling that the black cloud was lifting but not just temporarily, potentially long-term if we could build on what we had now.