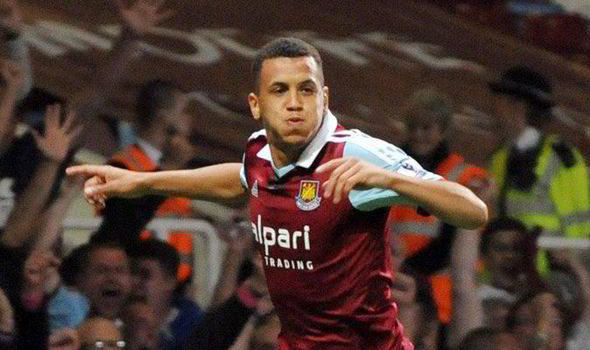 Here is a round up of the stories concerning the hammers this Saturday afternoon.

Karren Brady has hit back at her critics, insisting the grumbles over West Ham’s move to the London Stadium will fade and die once Slaven Bilic’s side start winning. Karren has also backed the manager to recover from a poor start to the season. “We have great faith in our manager and we sense no problems among the players. They all desperately want to do well and they will.” (via The Sun and HITC)

Chelsea await decision on cup allocation due to London stadium safety concerns. West Ham could be fined for not giving Chelsea the full allocation of 10% (via The Express)

Jonathan Calleri is still adapting to life in England following his season-long loan move to West Ham United and admits the ‘best is yet to come’. (via whufc.com)

Rigobert Song: There have been unconfirmed reports that Rigobert Song tragically died in hospital last night. Thankfully, this news does appear to be incorrect and nothing more than a hoax. (via Various sources)

Julian Dicks: “We need our big players.” Dicks has no doubts there is enough quality in the squad to see them move clear of the danger zone and believes the players can play a big role in helping to make London Stadium one of the best atmospheres in the country. (via whufc.com)

Dimitri Payet bagged his seventh goal for national side France on Friday, scoring in their 4-1 victory over Bulgaria. (via whufc.com)

Aaron Cresswell says he’ll be stronger for recovering from his knee injury. (via Tribal Football)

A fourth arrest has been made following crowd trouble at West Ham vs. Middlesbrough. A 17-year-old boy was arrested on suspicion of violence disorder and possession of an offensive weapon. (via Gazzete Live)
Michail Antonio could earn a second new deal after showing exceptional form. (via The Mirror).
Trevor Sinclair has said that Dimitri Payet proved this summer that he cares about West Ham more than money by staying at the club, and believes that he will only get better as he is something of a late bloomer. (via whufc.com and HITC)
Ravel Morrison is set for sensational return to the Premier league as Lazio sanction the loan listing of the 23 year old. (via 90 min)
Did we miss anything? please drop us a comment or start a discussion on our forums.
Also, we would like to say a big thank you to everyone who backed the site and voted for us in the football blogging awards (The FBA’s). Your efforts helped us make the shortlist for the best new blog! The final round of voting is now live, please click here to vote again.
share