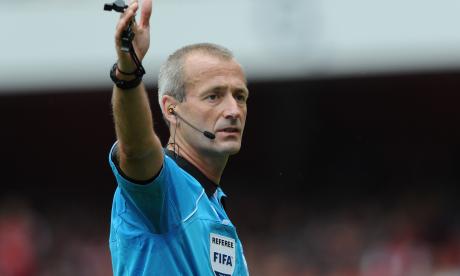 After a fantastic result against Crystal Palace at home last weekend and after so much hype around the Dimitri Payet saga, its evident that what has happened hasn’t affected the squad. I do support David Sullivan and the board’s decision regarding Payet. Payet’s contracted to the club until 2021, he signed a new deal in February 2016 and had his wages increased to be West Ham’s all time highest paid player. We 100% shouldn’t sell a player on the cheap because he’s refusing to play. In better news, we signed Jose Fonte from Southampton this week on a 2 and a half year contract. In my opinion, this is a fantastic signing for us and offers us more stability, quality and leadership to our defence.

The referee who was appointed to officiate our visit to the Riverside Stadium was Martin Atkinson. Atkinson has previously officiated two of our games this season, most notably West Ham’s 1-0 away win at Crystal Palace earlier in the season when Atkinson sent Aaron Cresswell off within 4 minutes for two bookable offences.
Martin Atkinson had a good game in my opinion and he kept up with the game well, as well as making good decisions. In the first half, there was an early yellow card when Manuel Lanzini brought down the extremely pacy Adama Traoré. The Ex-Barcelona B winger was attempting to start a counter attack before the West Ham man brought him down. Atkinson was spot on to issue Lanzini a yellow card and it was a foul that warrants an immediate yellow card in the modern game.
Later in the first half, there were appeals from the West Ham fans after Mark Noble went down in the penalty area. My initial thought was there wasn’t much contact by the Boro defender and after reviewing the replays, that referees don’t get the luxury of, there was contact but it was very minimal. In my opinion, there wasn’t enough contact for Mark Noble to go down so I agree with Atkinson’s decision.
I’ve always considered Martin Atkinson as one of the best referees in the league and the most experienced. Atkinson played advantage very well in the first half and throughout the game in fact. Adama Traoré was a constant threat and breezed past West Ham players at ease. The West Ham players were trying to challenge the Boro winger and actually were fouling the Boro winger on more occasions than not. Atkinson is highly intelligent and reads the game extremely well, playing the advantage on three or four occasions correctly.
I felt the assistant referees in the game could have helped Atkinson with a couple of decisions when the assistants were better placed. The best example of the game would be the penalty that should have been awarded to West Ham after Sofiane Feghouli was fouled inside the Boro penalty area. George Friend was the Boro player who attempted to challenge Sofiane Feghouli but the Boro defender completely missed the ball and his trailing leg wiped out Feghouli’s left foot. The decision was made to award West Ham a corner instead of a penalty but this is where the assistant referee, who would have been closer to the incident than Atkinson, needed to help with the decision making.
There was a period of the second half where Atkinson was very lenient with a couple of challenges which I felt could have been fouls. None more so than two fouls by Bernardo Espinosa in the second half that I felt both deserved a yellow card. The first foul was on Michail Antonio where Bernardo went through the back of the West Ham winger and it was a nasty and late challenge. Whenever a player goes through the back of a player it’s reckless and in my opinion, Atkinson should have cautioned Bernardo for this challenge. The second foul was equally as punishable than the first, but the difference was Atkinson issued a yellow card for this foul. Bernardo was late, once again, and caught Manuel Lanzini late and Atkinson got this spot on. In my opinion, I felt that Bernardo was lucky to be on the pitch when you look at both fouls in isolation.
Overall, I felt that Martin Atkinson had a good game but there were phases where I felt he was too lenient however, overall he officiated and controlled the game very well. For the penalty appeals against Feghouli, I felt Atkinson should have had some help from his assistants to ensure the correct decisions were made.
It was great to see a solid performance again by West Ham and it’s another 3 points. We now sit comfortably in 10th position in the league. With the addition of Fonte this week, it’s definitely going to be an interesting end to the transfer window. As it’s FA Cup next weekend, we have the weekend off to prepare for Man City’s visit to the London Stadium on 1st February live on BT Sport.
Thanks,
Sam
share