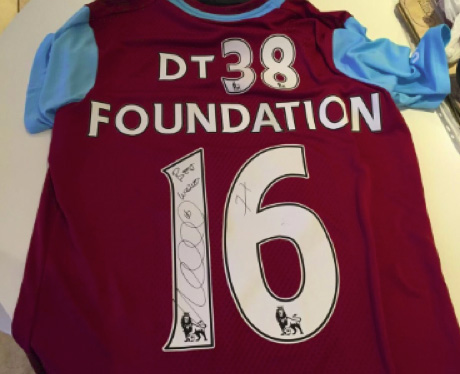 As part of the Mark Noble testimonial a competition was run in the club shop – a raffle for anyone who made a purchase to win a home shirt signed by Mark Noble. Luckily my brother won the shirt!

After having the shirt for a few weeks, he has decided that letting it sit in his wardrobe is not the best use of the shirt.

Therefore we have decided to auction the shirt, and exWHUemployee and the West Ham Way have agreed to help by advertising the shirt auction for us so that we can reach as many West Ham fans as possible.

To bid if tweet @frankiejacobs09 and @charliejacobs with #DT38MN16 with you bid. Final bids will be 9pm 25 May.

We will ask the highest bidder to pay the money direct to the DT Foundation and once payment is confirmed we will arrange getting the shirt to you.