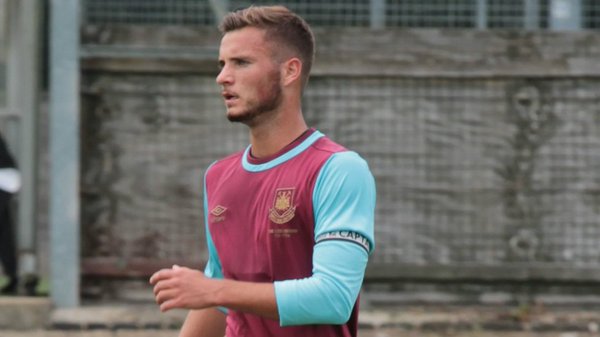 The 18-year-old was a regular for the Hammers’ U18s side last season, making 17 appearances and scoring once, while he also featured on a handful of occasions for the Development Squad.

Thrilled to put pen to paper on a one-year deal, Sylvestre said: “It’s like a dream for me. It’s a dream for everyone who plays football to get a professional contract but the hardest thing now is to keep going and pushing and working hard.

“I’ve enjoyed my time here so far very much because as soon as I joined, I felt really comfortable with my teammates and everyone at the Club and it’s a big family for me. That’s why my football has been good as well.

“My target next season is to play every game for the U21s and get my place in that team, and then you never know. Why not go with the first team a couple of times and train with them if I can? I want to do as well as possible.”

Sylvestre, who describes himself as an “aggressive number four” who “likes to make a challenge” is the son of former Swiss international Patrick, who hopes his career can inspire his son to a successful time at West Ham.

“I’m delighted for Noha to sign his first contract. West Ham is an incredible Club. With the last year in this stadium, and with the people here, it’s a great story and with the next year in the new stadium, it’s good.

“I hope for Noha [to follow in my footsteps] but there is a lot of hard work to do. To play in England is a dream. Now he has to work hard and maybe one day it is possible [for him to play for Switzerland].”

With the Club moving to their new home on Queen Elizabeth Olympic Park ahead of next season, Sylvestre admitted it is an exciting time to be involved with the Hammers.

“It’s going to be a massive thing,” he continued. “I’ve always come here to watch the games and seeing the Club develop like this really means something for me.

“I’ve only been here three years, but I’m really looking forward to it all.”