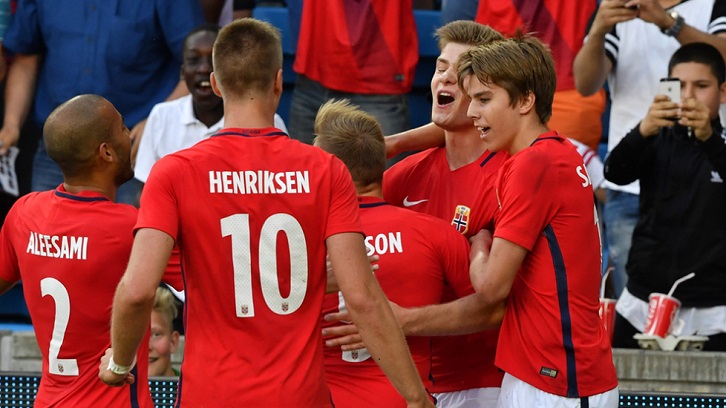 Martin Samuelsen was all smiles after making a successful senior international debut for Norway in Wednesday’s 3-2 win over Iceland in Olso – Official site article.

The West Ham United winger came off the bench eight minutes after half-time to replace goalscorer Pal Andre Helland of Rosenborg with the hosts leading 2-1.

Samuelsen caught the eye with his fast feet and willingness to take on his man and was involved in the move which led to Norway’s third goal, scored by FC Groningen’s Alexander Sorloth.

Speaking to Norway’s TV2 after the game at the Ullevaal Stadium, the 19-year-old was happy with his contribution, saying: “It’s always nice to be involved when a goal is scored. That’s why I want to play. It was fun!

“I did try a few things and to take on my defender, but did not always work. It’s a bit of a long time since I’ve played a match, so I quickly got tired. I made some little stupid mistakes with my touch that I need to weed out the next time.

“I’m not really happy when I lose the ball, but these things sometimes happen.”

Samuelsen, who debuted for West Ham in the UEFA Europa League second qualifying round win over Maltese club Birkirkara in July 2015 following his arrival from Manchester City, could now be involved when Norway take on Iceland’s fellow Euro 2016 qualifiers Belgium on Sunday.

The confident teenager will certainly not be fazed should he be involved in Brussels.

“It’s good to get my debut done and out of the way,” he continued. “It introduced me to the audience and allowed me to become familiar with the national team set-up and my teammates.

“I can play the next game with more confidence now.”

Norway coach Per-Mathias Hogmo was pleased with Samuelsen’s senior debut, but avoided putting more pressure on a player whose skills and creativity have got the Norwegian football public excited.

“We have seen his expertise in training, he has scored goals and has been so fearless and we saw that tonight,” said Hogmo.

“He has a unique talent, but you can see that he has a good way to go in terms of making the right decisions in match situations. But for a debut, I think we should give the boy credit and perhaps even more.”