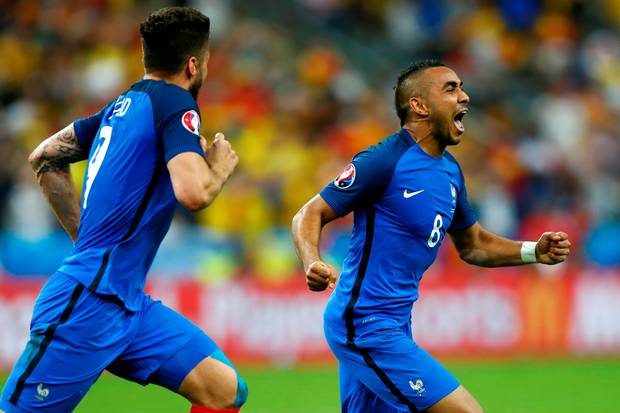 Dimitri Payet classily and dramatically scored in the 89th minute to secure France a late 2-1 win over Romania in the opening game of Euro 2016 at the Stade de France.

Les Bleus were minutes from dropping two valuable points after Bogdan Stancu’s penalty cancelled out Olivier Giroud’s header, until Payet classily curled into the top-left corner from the edge of the area to send the hosts to the top of Group A.

Adil Rami, playing as a replacement for Varane, began in central defence alongside Laurent Koscielny, and the two showed a lack of understanding when conceding a fourth-minute corner they struggled to defend and which ended with goalkeeper Hugo Lloris superbly saving Stancu’s shot from three yards.

France gradually settled with further possession, and had several chances to take the lead, and although Antoine Griezmann and Arsenal’s Giroud threatened, they failed to find the target.

The movement and vision of West Ham’s Payet continued to give France attacking potential, and he came close to inspiring the opening goal when setting up the powerful 57th-minute volley from which Paul Pogba tested Romania goalkeeper Ciprian Tatarusanu.

A minute later, Payet sent another cross towards Giroud, and this time the striker showed class and composure to beat Tatarusanu to the ball and steer his header towards the top left corner.

The expectation was that France would grow in confidence and extend their lead by continuing to expose Romania’s limitations – but the hosts were undermined by their vulnerable defence.

Patrice Evra clumsily and carelessly brought down Nicolae Stanciu in the area in the 65th minute, and from the resultant penalty, Stancu calmly finished beyond Lloris and into the bottom right to secure his first competitive international goal since October 2014.

In the pursuit of victory, Deschamps brought on the promising Kingsley Coman – to become France’s youngest ever player at a major tournament – and Anthony Martial, but it was Payet, for so long far from the manager’s plans, who proved their inspiration.

Receiving a pass from N’Golo Kante on the edge of the area, the forward jinked to his left before masterfully curling left-footed past Tatarusanu, and then leaving the pitch in tears of joy having ensured France began their campaign with maximum points.