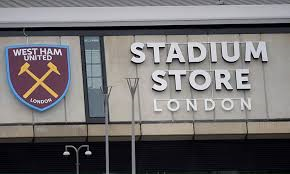 Transfer Rumours:  There have been many discussions regarding bids for certain players and talks taking place.  This is an ongoing thing every day as the chairman works flat out on deals and speaks to many people.  There has been some movement on one or two of the deals now and one of my top sources is set to do an article “If I owned the club” tomorrow which should reveal more.

I do some work with the University of East London in Stratford about two or three days a year.  I was very lucky that today happened to be one of those days and that I got to go and check out the club shop on its opening day.

The shop is spread over two floors with shirt printing, ticket collection, name printing and a café on the ground floor.  There are big screens behind the counters showing highlights of West Ham games and the café tables all have pictures of West Ham “Legends” on.

On the upper floor there is more on offer.   There is the usual stuff including shirts, scarfs, mugs etc.  Everything that you would expect. It is here by the stairway that you find the Lyall gates from Upton Park.   Again further down the shop there is a big screen showing West Ham highlights.  One thing I noticed is that there are a lot more tills now to accommodate the increase in our attendances. I did notice that there were a lot of shop assistants, in fact when I was in there, there were more assistants than fans.   There were some nice pictures from the farewell game that caught my eye.  The store is a big upgrade on the current stadium store and there is a whole host of new clothing with the new badge on.

One thing I did think about the store is that there is no parking there.  It overlooks a training athletics ground and is surrounded by the Olympic Park on the other side.  It isn’t a problem because you can just park in Westfield and walk over but the beauty of the store at Upton Park was that you could park your car and get straight in on a non- match day.  To be honest though this is a minor negative compared to a whole host of positives.

I was impressed.  One thing to note as well; I saw a Payet big shirt (like you would have seen on the internet) built in to the stadium right by the shop.  It would look really silly going into the stadium with that there having just sold him to Madrid.  I therefore back up what I have been saying for days now that the club will do all they can to hold onto him.  Stay tuned tomorrow for more transfer info.

Yes there isn’t much transfer news here but I am not going to make it up for the sake of doing so and we should have more tomorrow.