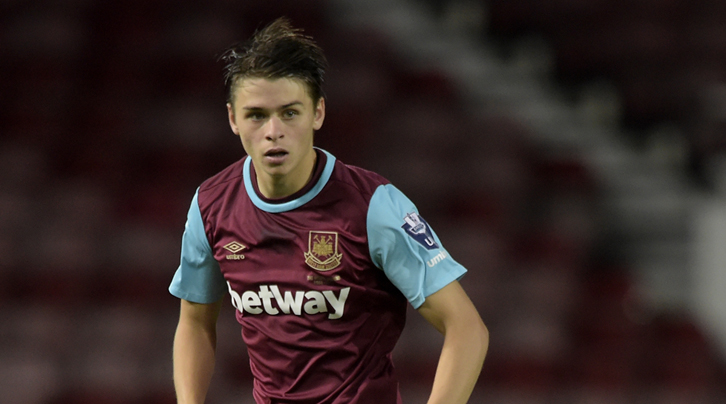 Walsall have made their sixth summer signing by bringing in teenage midfielder George Dobson on a season-long loan deal from West Ham United.

The 18-year-old central midfielder began his career at Arsenal, captaining their Under-18 side, before joining the Hammers in July 2015.

“George is someone we noticed a few months ago,” said manager Jon Whitney.

“We did our homework on him and spoke to West Ham. He’s held in high regard, a player who plays beyond his years.”

“West Ham brought George in from Arsenal where he played as a centre half but was moved forward to play as a holding midfielder which is where we see him playing,” added Whitney.

“I know he’ll go on to be a top player of highest level and we’re lucky that West Ham have entrusted us with his development for the next 12 months. Age isn’t a factor. If he comes in and is good enough then he will play.”

The 18-year-old, who joined the Hammers from north London Club Arsenal last summer, made 21 appearances for the Development Squad last season, playing a major role as they won the U21 Premier League Cup.

The youngster, who is a West Ham supporter, was also named on the first team substitutes’ bench for the March Premier League wins over Tottenham Hotspur and Everton last season.

After completing the move, Dobson said: “I can’t wait to get started. It’s a massive opportunity for me and one I’m really excited about and I just hope I can get as many games under my belt as possible.

“Playing in League One is a big step up, but one I’m confident I can adapt to. Last season Walsall finished third, so you can see the ambition and the talent is there.

“I had a full season with the U21s last season which was very good, I enjoyed it a lot and now I feel ready for the next step. My plan was to go out on loan at some point this year, I just didn’t know when. Now it’s happened, I can’t wait to get started.”

“Last season, Reece and Josh did brilliantly on loan at Bradford and if I do anywhere near as well then I’ll be happy. Reece won seven awards so that’ll be pretty difficult, but I’m confident in my ability that I can do well.

“Hopefully I can make my professional debut sooner rather than later but I know I need to work hard to earn it.

“I’m excited to meet up with the staff and players, and get stuck in at a new environment and a new culture. “

As Terry Westley’s Development Squad reached the U21 Premier League Cup final against Hull City last campaign, Dobson played in all four of the ties, dictating play and impressing from the centre of the park.

However, after featuring in the final first leg against the Tigers at the Boleyn Ground, Dobson was forced to watch his teammates lift the trophy after a penalty shootout victory from the stands, after injury had ruled him out of the clash.