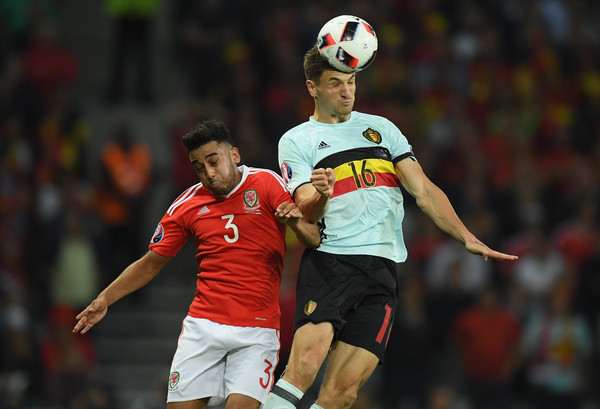 The Club Brugge and Belgium right back Thomas Meunier has been quoted by Voetbal Nieuws as saying that he will decide on his future today amid offers from PSG, Napoli, West Ham and Torino.

Meunier didn’t start the opening game of the campaign against Italy, but came in against Ireland and whipped in a superb cross for Axel Witsel’s goal in a 3-0 win, and also started against Sweden, Hungary and Wales.

His performances in France have turned some heads, and Meunier claims he has four offers on the table to leave Club Brugge this summer.

Meunier has been with Club Brugge since signing from Virton in 2011 for £150k, and with more than 150 appearances for the Belgian side, he’s gained great experience even at the age of 24, setting him up for a big move elsewhere.

Meunier stated, “My choice is not made yet, PSG? There’s a 30% percent chance. I will decide tomorrow, there are also offers from Napoli, West Ham and Torino,” he added after Belgium’s defeat to Wales.

Standing at 6ft 4in, Meunier is an athletic full back who can defend and attack, and he could be ideal for West Ham as they search for new additions.

Meunier played for Club Brugge in the Europa League last season scoring twice in their games against FC Midtjylland and Legia Warsaw, but they were eliminated at the Group Stage.