In this column, on my twitter account and occasionally on our forum I offer my opinion and give news out.  Any other feature that you see on the site is not written by me and is the opinion of the writers.   Our lunch time and afternoon round ups for example, I have no input in, but we bring them to you so you are up to date.

Today I said on our forum (please get involved with this – it is growing but we need more contributors) that I had good news regarding a transfer.  That comment was about Fletcher as I knew he had completed his drawn out move to the club.   There had been a few delays due to contract issues and compensation fees but he has now been confirmed on the official site.  The player is said to be highly talented and it really means our development squad is looking very impressive.

We have the two extremes of football reporting shown over this deal, depending on what you read you either think he has joined no question or that the deal is off and Bacca will never wear the Claret and Blue.  Well I can say that neither of the situations is entirely correct.  We met with Bacca’s representatives today and negotiated the deal.  As I have continuously said in my column the two parties are some distance apart on agreeing terms but not so far apart that it cannot happen.  Round 2 of negotiations should happen tomorrow and as always DS is working on a compromise package.  The deal already contains a number of clauses and there are a few others that can be amended and inserted to make the deal happen.  The deal isn’t agreed but there is a decent chance that it will be soon.  Bacca has made it clear that he is happy to join us, he just wants to make sure that the financial package is to his liking.  The one problem we have is that he knows how much the club want him.   He also knows that we have missed about on Batshuayi and probably Lacazette.  He also knows that we offered Carlos Tevez wages of £150k a week not that long ago so he is holding out to see what is the best deal he can get.  I do think we are not that far off agreeing a deal and then of course he needs to pass a medical.  I would hope this deal will be concluded this week.

I will get stick for not naming the player but I have been told in strong terms by two of my best sources that I am not allowed to (and I have to respect them and the importance of doing so).   There has been a little bit of movement today with the transfer and the club are planning a smash and grab deal.  The player is of a very high calibre and the club intend to make a move and try to thrash out a deal before any other club gets close.   The club are trusting an agent who they have strong links with to try and help with the deal.  It would be a major coup but at this stage it is extremely unlikely to happen.

The club really do not want to sell the player and will do all they can to hold on to him.  We will reject very large offers should they come in for the French international.  He is happy at the club and I don’t think anyone  is worried that he will leave.

It has been reported that Leeds United have bid for the Walsall left back who I revealed as a target of ours.  It is thought that Rico is delaying on committing to a move because he intends to hold out and see if West Ham, Arsenal or Tottenham make a move for him.  Should Henry move to Leeds it could pave the way for us to sign the current Leeds left back/left winger Charlie Taylor.

DS is like a man possessed when it comes to great deals.  In the last few days we have seen Pelle and now Janssen (Spurs) join other clubs as well as Batshuayi earlier on, so our forward target options are reducing.  We will be exploring other targets soon – pretty much all of them I have covered.

It has been well documented how in the summer I reported that Manchester United had put in an enquiry for Oxford.  The club do not wanted to sell him and that is why they were quite quick to dismiss the offer that I had previously mentioned in May. Whether United will come back for him is unclear at the moment but I would not be surprised if they do, it is a question of whether we can persuade him and his agent to ignore them again.

I am sure you will all agree the website looks superb at the moment.  Matthew has spent hours working on it and has personalised it exactly how I wanted it.   He will be designing our new app soon and he has some great new features coming.  I could not recommend him enough.   He has a voucher which entitles all West Ham way fans to 30% off and is well worth doing if you want support with a website. 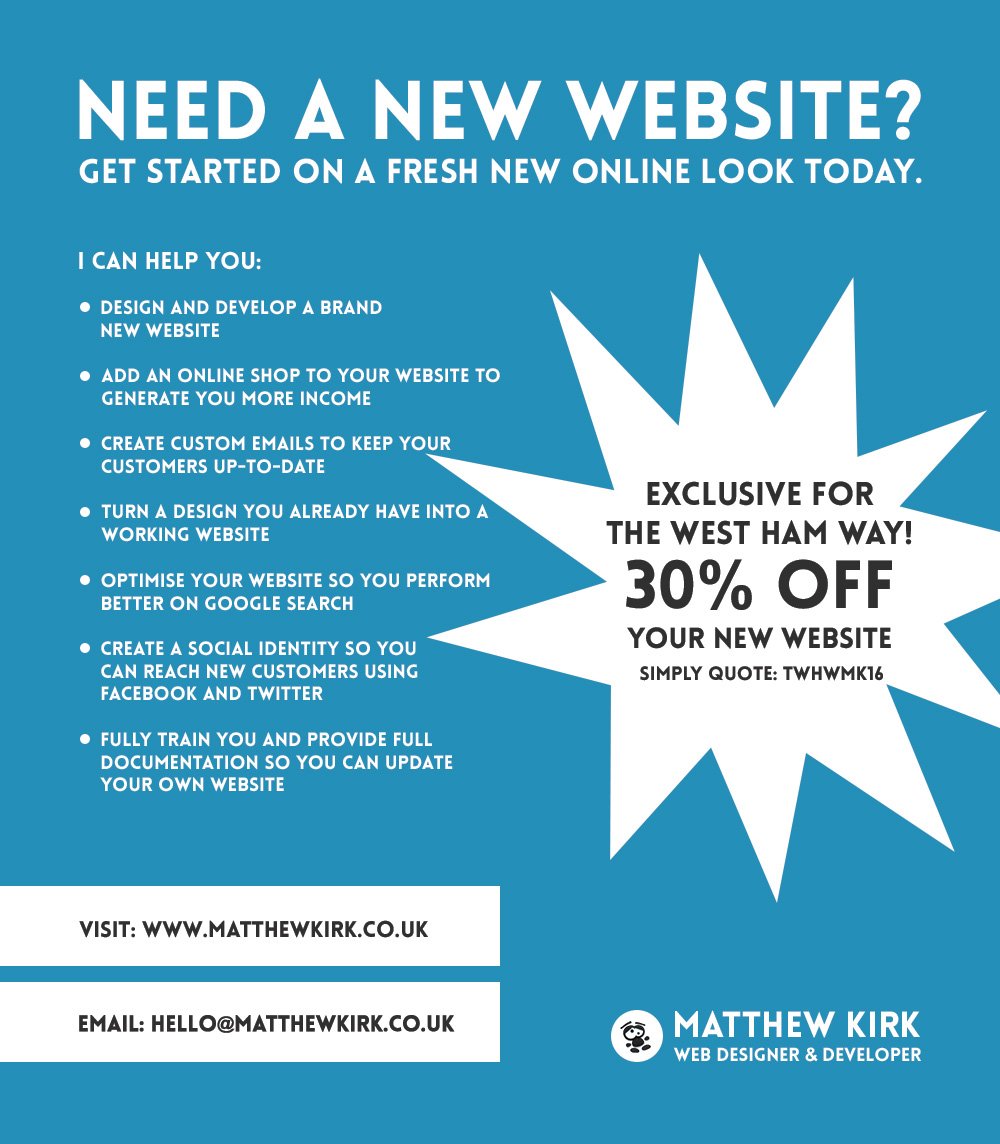 There will be further excitement at the club this week so keep the faith.