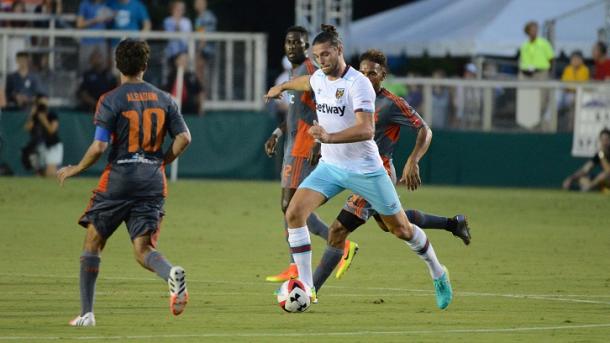 West Ham United finished their USA tour with a 2-2 draw at the hands of the Carolina Railhawks on hot and stormy evening in the American South.  For West Ham, it was a disappointing result in the 10,000 seat stadium, in front of a significant number of American supporters.  For Carolina it was their most prestigious result since their 2008 victory over Burnley.

The match had an 8 PM start time and the temperature was still hovering around 90 degrees (32 degrees Celsius) at the start, with the sun slowly starting to set behind the Westside stands.   Despite the heat both sides showed spirit from the outset.   Slaven Bilic started a very competent XI to begin the match with Adrian, Byram, Reid, Burke, Feghoulli, Noble, Obiang, Samuelsen, and Lanzini joining Andy Carroll at the forward position.

Only moments into the match Feghoulli had the game’s first good opportunity when he drove into the penalty area and went down on the challenge.  No penalty was given and the chance was missed. In the 13th it was the home club who had the good fortune as a Nazmi Albadawi cross was put in Adrian’s net by Winston Reid.  With the early lead, the Railhawks looked to keep the pressure on their Premier League opponent.

Minutes later it was Carroll who went down on a challenge in the penalty area.  Once again referee Christopher Spivey let play continue. Only a minute passed and Carroll helped Winston Reid make amends for his earlier own goal by perfectly placing a pass to which Reid calmly put in the back of the net.  Finding the equalizer, (and the first goal of the pre-season) West Ham now went looking for a win.

In the 21st minute, West Ham struck again as Feghoulli had a good run down the right side and crossed to Carroll who finished with his left foot, and brought his team to an expected early lead.  Undaunted, the Railhawks drove right back into Adrian’s third of the pitch and Brian Shriver curled into the crossbar.

By the 32nd minute play was halted so the teams could take a water break due to the heat and humidity.  The first half plus two minutes of added time were largely uneventful and West Ham took a 2-1 lead into the break. For the second half, Bilic brought Spiegel, Page, and Martinez on for Adrian, Cresswell, and Carroll.

During the early going of the second half, both clubs had their chances but neither seemed to find great success in their attacks.  By the 60thminute the rain had arrived and dangerous lightning entered the area of the stadium.  At 62’ the referee suspended play for what turned out to be a 40 minute weather delay.

After the weather break, Bilic brought on Rice, Henry, Poyet, Quina, Browne, and Makasi for Reid, Burke, Obiang, Feghouli, Lanzini, and Byram.  The remaining West Ham fans were left to hope that this more junior squad could preserve the 2-1 lead.

Unfortunately, luck wasn’t on West Ham’s side as Lewis Page fell and handled the ball within the penalty area, earning him a yellow card and the Railhawks a very important penalty kick.  Marvin Ceballos’s 68 minute spot kick was successful and the home side had pulled even.

The Hammers were unable to amount much of an attack as the game neared final time. There was a long break to tend to Doneil Henry, who was injured and did not return.  West Ham played the final minutes with ten men and really had no great action in the four minutes of stoppage time, other than a Domingos Quina yellow card late in the added time.

After the heat, the storms, and a 40 minute delay, the match ended 2-2.  Despite only collecting one point out of a possible six during the two USA friendlies, the club gave its American supporters a chance to see them in action, and they leave the states with no major injuries. (Other than Doneil Henry who’s status is unknown)  Now West Ham can rejoin its international players and prepare for both the start to Europa play, and the opening of the new Olympic Stadium.  Hopefully, as new talent arrives from a strong transfer window, West Ham can have the depth to improve in the BPL and give the Europa league a good shot.  As fun as the American tour was for the club, things seem to get very serious very quickly as European play begins in weeks.