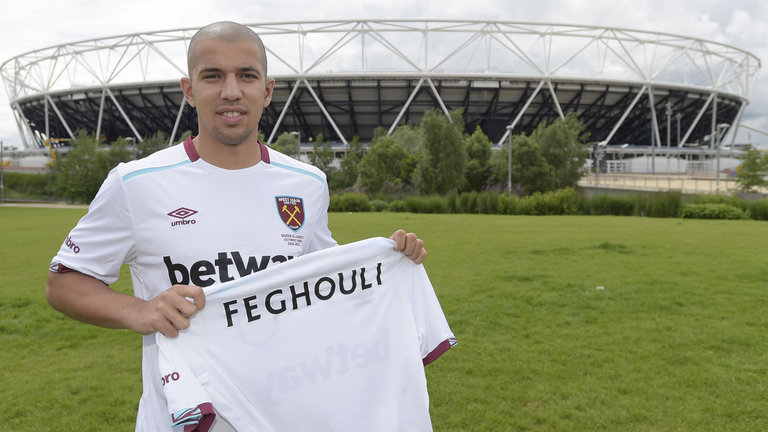 After my glowing praise regarding the capture of Håvard Nordtveit I must now approach the thorny issue of Feghouli. Analysing his performances over the past 12 months leaves me somewhat perched firmly on the fence as to how successful he may be. On the surface he has all the attributes to be an effective winger. 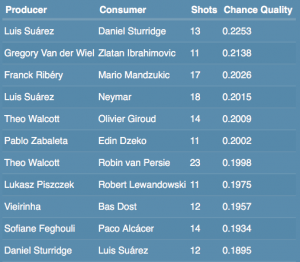 I used this table from @DeepxG to help illustrate an article I wrote not too long ago that dared to suggest Walcott might be a viable transfer prospect. This blasphemy was unpopular, but not without reason for grounding. The table is concerned with quantifiably measuring the quality of chance creation. Expected goals (xG) and expected assists (xA) are incredibly powerful tools for prediction in football. Anyone who is remotely interested in the topic should click here [http://11tegen11.net/2014/02/10/what-is-expg/] but for those that are understandably unconvinced, the cold hard truth is shown below. 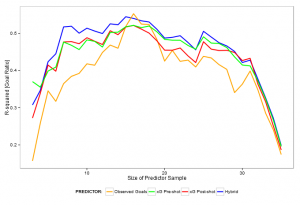 This graph shows how in the long wrong, expected goals is a significantly more powerful model for predicting results than actual goals. A huge component of an expected goal is the quality of the chance, and the aforementioned table shows football’s greatest partnerships in respect to this metric. As you can see Feghouli’s production for Alcacer has been very effective. (However I’m not entirely sure what season this figure relates to since it’s almost certainly not from the last 12months. This will become clearer later).

As with Nordtveit, I’d like to have a look at the system in which Feghouli was used at Valencia. To do this I’ve once again looked at an individual match that is at least fairly representative of that team’s usual tactics. For the sake of optimism, this game should show the system being used to its maximum potential. Although there is a wide range of incredibly interesting/boring/unnecessary (delete as appropriate) ways of analysing this statement, the simplest is whether or not the tactics resulted in an eventual victory. Unfortunately, finding a recent Valencia win in which Feghouli featured was harder than expected.

Los Che had an incredibly disappointing season, finishing 12th and burning through four managers. Back in March, Gary Neville experienced a rare moment of triumph whilst visiting Malaga. Feghouli started as the Forward Right in a 4,3,3 his contribution to the game is shown below. Despite the positive performance from his team, the analysis of Feghouli paints a somewhat disappointing picture. Compare the game impact of Denis Cheryshev (on loan from Real Madrid and playing as the Forward Left) and Feghouli. 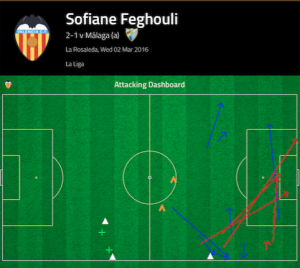 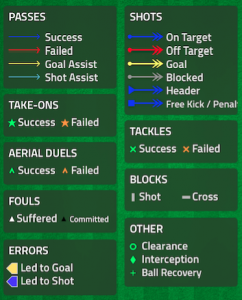 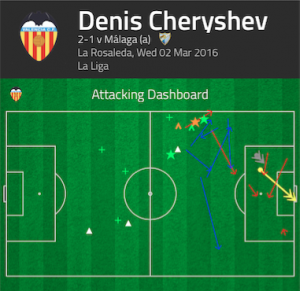 Cheryshev attempted far more take-ons, recovered possession in a more advanced position, and even managed to knick a goal. Of the failed passes, many of Feghouli’s were crosses from deep, whereas Cheryshev’s failure map is characterised by unsuccessful pullbacks. The latter technique has a much higher expected assist value (xA) than blindly swinging in crosses. I do understand that this is an isolated game, and any number of factors could have lead to one wide man having more success than the other, but Feghouli’s figures over the course of the season don’t make for much better reading. 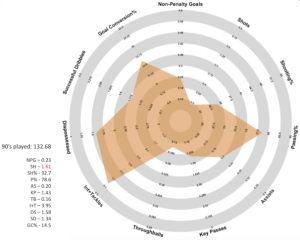 Feghouli 2015/16 (courtesy of @fussballradars and whoscored.com)

Feghouli started just 13 times in an already disappointing team and only managed a single goal and assist. Luckily for us, he has proved in the past that he is capable of getting much larger figures than these. Luckier still, statistical analysis suggests there’s a possibility that this poor season doesn’t even matter.

The two graphs above come from Joel Salamon’s brilliant lecture for Opta. Opta are one of the companies that provide all of the raw data from which these various models can be run. This is incredibly mathsy, but shows how a players non-penalty goals and assists (NPGA) one season have very little baring on their performance next. The graph on the left shows what almost perfect results would look like, whilst the right shows the reality. (I’d really recommend that anyone interested in this and wants to see the reality of further metrics check out the lecture here [https://www.youtube.com/watch?v=CVHA-qtmrxY]).

So how well will Feghouli work at West Ham? Ultimately it’s difficult to tell. He arrives on a free at a time when we must strengthen the depth of our squad and has the potential to fit into a number of systems Bilic favours. However, rumours of his failure to turn up to training and attitude bring memories of Ravel and Amalfitano. My gut instinct is that this might not be the signing some are hoping for. That said, flair and pace are crowd favourites, so it could still be a successful move just for entertainment value and squad depth alone.

Before concluding, I’d like to quickly mention Toni Martinez. The Spain u-19 forward and another signing from Valencia seems to be very impressive. Martinez was only kept out of the first team squad by Alcacer and Negredo, but managed over 100 goals at youth level. Unfortunately I don’t have much more information on him than basic figures, but from the limited footage available I’ve been impressed. I’d like to see him given a first team opportunity, but as with Samuelsen, don’t be surprised to see him loaned out.