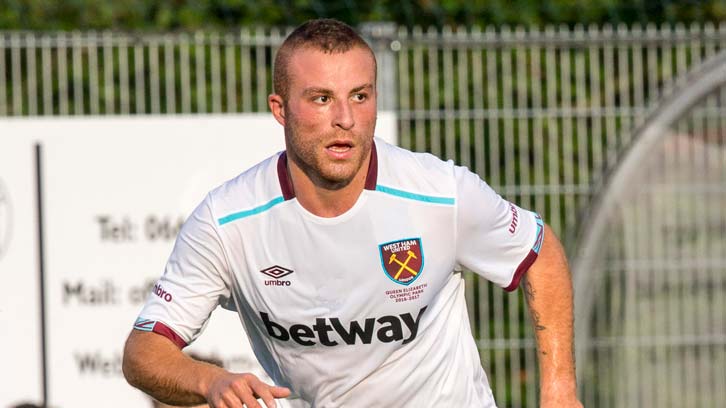 West Ham played their 4th pre-season game this afternoon in Krottendorf in Austria against their Russian opponents Rubin Kazan.

The Hammers named a stronger starting line-up than yesterday’s game including Adrian in goal.

The back four consisted of Michail Antonio and Aaron Cresswell at the fullback positions and Reece Burke and new signing Havard Nordtveit at centreback.  Captain Mark Noble once again anchored the midfield alongside Cheikh Kouyate and young Portuguese star Domingos Quina.  Summer signing Sofiane Feghouli started on the right wing with ex Besiktas man Gokhan Tore on the left and Enner Valencia made his second appearance of pre-season in the lone striker role.

The Irons had the first decent chance of the game when a ball clipped over the top set Valencia free but Ryzhikov managed to save the Ecuadorian’s attempt on goal.  Once again one of the bright spots for the Hammers was the ex Valencia midfielder Sofiane Feghouli.

Rubin Kazan opened the scoring in the 23rd minute when Akhmetov got in behind the West Ham defence and cut the ball back for an easy finish for the Ukrainian international Marko Devic.

The Russian side then doubled their lead right before halftime when a loose pass from young Irish defender Declan Rice set Belgian U21 winger Maxime Lestienne up and he beat off the challenge from Nordtveit and slotted his shot in the bottom right hand corner of the net.  Rice had only been on the pitch 13 minutes after replacing Reece Burke in the back line.

Obiang replaced Domingos Quina at halftime and the Hammers huffed and puffed but couldn’t really break down the Kazan back four and as their legs began to go after playing two games in 24 hours the Russian side took complete control.

The 3rd goal arrived in the 67 minute just seconds after Garcia had struck the post.  This time 36 year old former Turkish international Karadeniz beat Adrian after he got a clear run on goal.

Slaven made more changes as the game neared the end but to no avail as the Hammers rarely theatened to get a foothold and the game ended in a 3-0 defeat.

Although Slaven might be disappointed that his side didn’t really get into this game he will be happy that Noble, Nordtveit and Adrian got another 90 minutes under their belts and the players seemed to have come away with a clean bill of health, plus the fact the majority of players just played 2 games in 24 hours against a side two weeks ahead of us in their pre-season preparations.

The Hammers last game of their Austrian tour will be on Saturday against FC Karlsruher and hopefully we will see the first appearances of Carroll and Reid on this tour as it is the club’s last game before their 1st game of the 2016/17 Europa League.