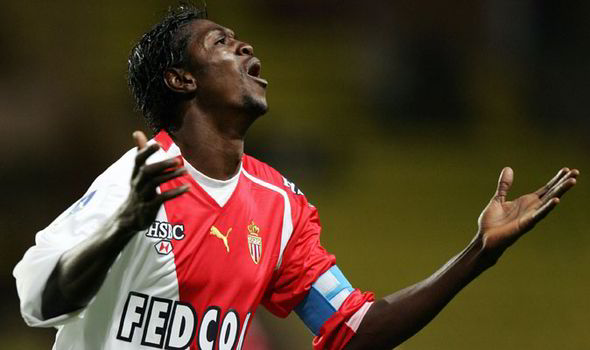 My first article so be kind by ‘Ammer in exile:-

I’ve been thinking about writing this for a while now and thanks to Ex’s invitation I now have a platform to do so.

Depending on your age these days of transfer gossip is a million miles away from my day of reading TELETEXT or CEEFAX for West Ham gossip. The days of coming home from school/work and switching on BBC CEEFAX, typing p.302 and then scanning headlines to see what’s happened to your club that day are long gone. After checking the updates it was then onto p.321 to get your team news and gossip. It didn’t stop there for some of us as on your teams page was a telephone number for Clubcall with a teasing few words of transfer speculation. e.g.’ Hammers looking at South American hot shot!’ Now for most people this was where it ended, however for us more passionate/idiot fans (idiot is the right word) this is where it got interesting. At this point it was a case of checking on my parent’s whereabouts and then if the coast was clear onto the home phone salivating that we were finally signing Marcelo Salas. Depending on your type of phone this was no easy feat either, we had what is now a ‘retro’ but at the time downright annoying rotary dial phone.

So after what felt like a lifetime you were greeted by a very distorted version of ‘Bubbles’ followed by some bloke giving you the headlines of what you were about to listen to. Obviously Clubcall weren’t going to give you the juicy bit first, they had us where they wanted us. They had me at hello, to quote the film Gerry Maguire! At this point I was starting to feel nervous and almost guilty, probably the way you feel heading down to Hotel Reception the morning after the night before when, a little worse for wear you thought it would be a great idea to order an adult channel on your TV and now had to check out in front of your mates. “Honestly I thought i was ordering Die Hard and after roughly 5mins 25 seconds I realised this film’s Nakatomi TOWER wasn’t what I remembered!!”

It was normally the 5mins 25 seconds that I would lose my nerve and hang up, still no closer to finding out about Salas as I was prior to even switching on the T.V in the first place. It didn’t end there, next, with the end of the month approaching the BT bill arrived! I honestly think my very conservative parents would have been less angered if the high bill was due to sex lines. Whilst grounding me I think my Dad would of least found solace in the fact I was just being a typical teenager, but to find out his son was a gullible fool and instead of fantasising about South American beauties, his son was dreaming about a South American playing in the Claret & Blue. (I still know which I’d prefer, sorry Ms Chile but its Marcelo all the way).

The other problems in those days was our board were not as Media friendly as our current ones, in fact they were pretty much unheard of. So it was in most if not all cases we only knew our signings when it was announced in the papers the next day.

Once computers were a common thing in households and fan websites became the places to go for transfer gossip things got a lot better, or did they?

In the early noughties one of my closets’ friends was doing a lot of work with West Ham and through his contacts I started to receive some gossip myself. I was about to start my very brief stint as an ITK!

I was told that Adebayor was signing for us from Monaco. Brilliant my first post onto a very popular website I’d been on for a few years. Adebayor is signing for us I posted. I felt a wave of satisfaction knowing that all those people like me waiting for any inkling of our next signing would be rewarded with this news. “Rubbish” was the first reply, “1st post attention seeker the next”, “No chance or HAHAHAHA followed”.

Not the reaction I was expecting (naive I know). I couldn’t delete the post, all I think I posted was something along the lines of “well that’s what I’ve been told in good faith”. I felt a huge weight of expectation on my shoulders, like it was now my responsibility for Adebayor to sign. I must of annoyed the crap out of my mate that day asking him every couple of hours “What’s the latest?” By the time the day had finished Adebayor was a Gooner! I think wages were the main reason it didn’t happen and probably Arsenal were/are a bigger attraction. I posted my apologies and I think a couple of users posted their appreciation of my honesty.

Next came the news from my mate to check the back page of The Sun, the two players mentioned were coming to England in the next couple of days but not to sign for the two different clubs spoken about but BOTH were coming to us!! Checking The Sun, Mascherano and Tevez were the two players. Should I post this news? No way, even I didn’t believe it. My mate was genuine, in fact he won me around £50 for telling me Pardew was going to be our next manager a couple of months prior to the announcement. Looking back had I posted that info if Mascherano and Tevez I could have claimed to be one of the best ITK around. I can only imagine the abuse I would have got for the three or four days prior to the official announcement. In fact I don’t need to imagine, I only have to look at the abuse Jinxed on Kumb gets which isn’t even scratch the surface to what our EX gets.

The problem is a tough one to solve and one which may never be solved. The beast that is Social Media has given us fans a tool that not only saves us from high phone bills and grounding from our parents but gives us 24/7 news and transfer gossip which not even the press or our own club’s information outlet can compete with. We perhaps receive too much information but we crave it. How many of us wake up and our first port of call is checking our favoured sites for any overnight gossip that may have arisen?

It’s so easy to access information, not only with checking our Club’s twitter feed we can even check out twitter feeds from our own board. Taking it to another level we can even converse with our own players or even potential new players. I wonder how many post’s Carlos Bacca has received asking him to join. (At least ten from me)

So which do I prefer, not an easy question to answer. I do often wonder if it would be better picking up a newspaper and turning the page to see a new Hammer standing in a shirt and holding a scarf. You may of had a discussion in a pub with your mates and found out that player was a target. A weird feeling these days I know, as fans, we didn’t even get a chance to let our board know whether we agreed with the potential signing. We wouldn’t have even been able to stop the club signing Joey Barton!!!

However on a more frightening thought, what would I do with my spare time, converse with the family, housework, DIY? The mind boggles with what I could do with time being spent away from West Ham web sites.

No, I think I prefer it now. I think it’s great that at any given time we can check on the latest news and speculation. I do wonder to what level it can take us fans to next, maybe we can just let Mr Gold know that we’ve spoken to a player on social media and he’s confirmed he’s very open to a move. Maybe have our PAYPAL info attached to our Twitter account so Mr Gold can gives us the finder’s fee if the deal comes off!