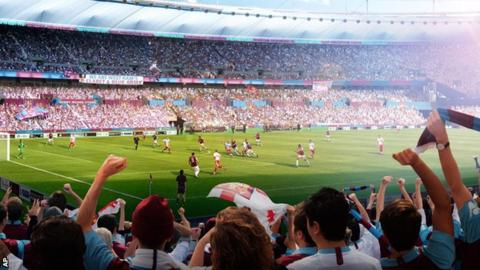 This is written by Katie S

Rightly or wrongly, part of my match day routine now entails reading tweets from the fans after the match.  I like to see what our fans think of the game and see if they have the same thoughts as myself.  Thursday night was no different and I must admit I was pleasantly surprised with the tweets I read.  The general consensus seemed to be pretty positive and for those of you who follow me will know this is not what I was expecting.

I could discuss the atmosphere and the ground itself, but one of the main tweets that stood out for me was regarding standing during the match.  There seemed to be some abuse between fans that wanted to sit and those that wanted to stand.  There have also been tweets to and from stewards, I am sure the stewards understand why some fans wish to stand, but they are just doing their job by telling fans to sit down, as officially all stadiums in England are all-seaters.  This really got me thinking as I could tell the overwhelming majority (of the fans on Twitter) seemed to prefer standing and were quite against those who wanted to stay seated.

I think this issue has been brought to light due to many fans moving around the stadium.  The Trevor Brooking/Bobby Moore lower were always known to be standing areas and I think lots of the fans that were located there at Upton Park, may have possibly moved to the East or West stands and vice versa.  This has obviously highlighted the differences between the stands and maybe the type of fan in each of them.

I completely understand that fans want to stand up, it does seem to generate more atmosphere when everyone is up and singing together and this is what football of old was all about.  I previously had a season ticket in the East Stand upper and nobody stood up, however I know from away games that I have been to, everyone stands and it cannot be denied, it does create a certain buzz and energy.  My Dad also speaks fondly of his experiences in The Chicken Run terrace and says that nothing can match the atmosphere of those days.

However, being on the shorter side it can become incredibly frustrating not being able to see any of the game when others are standing, I have paid a lot of money for my season ticket and want to watch football, as well as cheer on my team.  I spend the whole match on tiptoes and stretching my neck just trying to see if I can catch a glimpse of the ball.  It also causes problems for children or those that are not that steady on their feet.  For those of you who were at the Crystal Palace game last season, you will remember the whole of Upton Park celebrating Mabel’s 100th birthday.  Mabel is a lifelong hammer and would have been at The Boleyn when it was all-standing, however I very much doubt that she would now be comfortable standing for 90 minutes.  Surely we cannot suggest that she is not a ‘true football fan’ because she would choose to sit down!

I think this emphasises the need for safe standing in football stadiums, but do wonder if this is something that can be introduced at a later date, after so much work being put into the current seating.  Safe-standing areas are a success in Germany, Sweden and Austria.  These areas are financially beneficial to both supporters and the club.  We have all seen the Dortmund Yellow Wall and know what an impressive and intense sight it is, but more importantly, IT IS SAFE.

In conclusion, most fans want the choice to stand or sit at football games and rightly so.  I believe there is no right or wrong way to support your club, as long as you get behind your team that is all that matters, but let’s not abuse fans if they want to sit or stand – We are all West Ham and that is the important thing.

What are your thoughts on safe standing, do you think all fans should accept that football fans want to stand or do you choose to sit?  Let me know what you think @flump9 on Twitter.