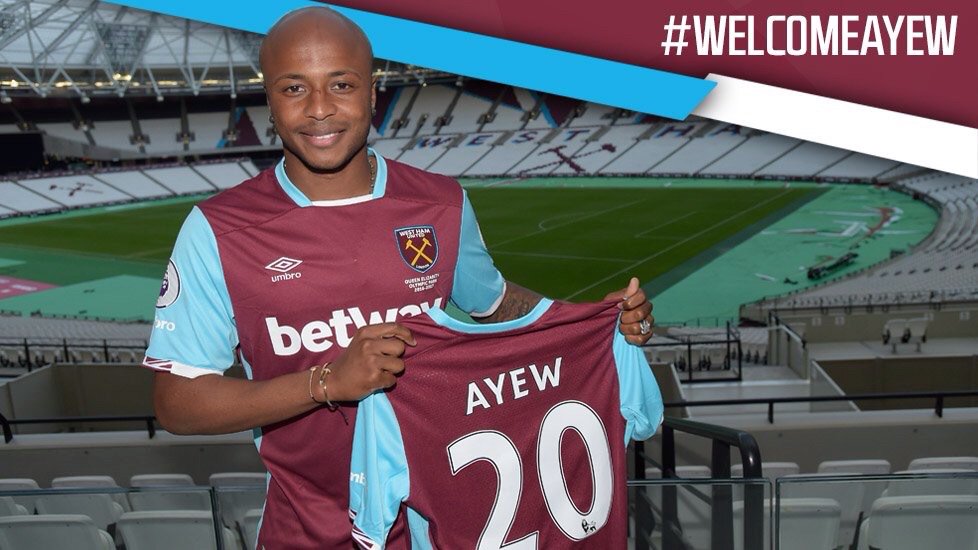 Jack Sullivan has confirmed via his twitter account this evening that the Ghanaian attacker has rejoined his former teammate Dimitri Payet at West Ham on a 3 year deal (with a 2yr option) for a fee of £20.5m from Swansea City.

Ayew becomes the 2nd signing for the Irons today as they already filled the problematic leftback position with the acquisition of former French youth International Arthur Masuaka from Olympiacos for £6m earlier this morning.

Slaven Bilic himself confirmed that both signings were close yesterday when interviewed by BT Sport prior to the friendly against Juventus.

The £20.5m quoted is also a new record fee paid by the Irons eclipsing the fee paid to Liverpool in 2013 for Andy Carroll.

It’s a sizeable investment by the club who have been attempting to sign a striker all summer, yet failed to land Alexandre Lacazette, Michy Batshuayi and Vincent Janssen among others; although the Hammers are still reportedly in negotiations with AC Milan striker Carlos Bacca. Although Ayew usually plays on the wing or in behind a main striker, he can also play up top on his own as he proved last season scoring 6 goals in that position in 8 starts including in Swansea’s comfortable victory at Upton Park in May which basically ended West Ham’s Champions League hopes. Ayew finished the season with 12 goals in 34 starts for Swansea City.

There’s also the connection with the Hammers’ star Dimitri Payet. The combination of Ayew, Payet and Gignac produced 80 goals in their last two seasons together at Marseille so I’m pretty sure Slaven Bilic has looked at the way both played together previously when making his decision to sign Andre.