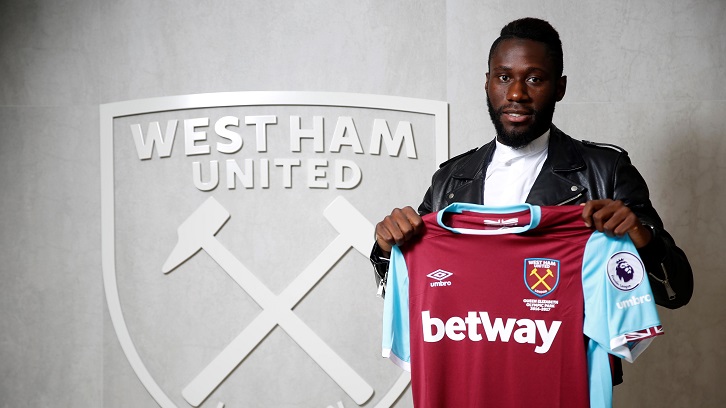 This morning, West Ham completed the signing of French left-back Arthur Masuaku from Olympiacos on a 4 year deal for a fee believed to be in the region of £6m.

The Lille-born defender, has played 74 games for the back to back Greek Champions, including 12 in the UEFA Champions League.

Masuaku stated “It’s a big honour for me to be part of this Club,”. “I was speaking with my agent about some opportunities, but when he told me about West Ham and also the coach, I didn’t think twice, so in my mind, it was West Ham.

“Now, to be able to play with players like Dimitri Payet, I was thinking on the way here, it’s going to be crazy! I can’t wait to play with him and the rest of the team.

“For me, the Premier League is the biggest league in the world. When I was 18, my target was to come here, so now I am here, I have to prove myself to the fans and to the team so that I can play for this big Club.”

The former France U19 international was immediately installed in the Olympiacos starting XI when he was signed from Valenciennes in 2014.

Masuaku’s European debut for the club was a notable one, as he scored in a 3-2 UEFA Champions League group stage win over the previous season’s runners-up Atletico Madrid in September 2014. He also featured against Arsenal and Bayern Munich in last season’s group stage, where Olympiacos were unlucky to be eliminated with nine points.

The Hammers’ new boy was capped by France at both U18 and U19 levels.

Unfortunately Masuaku will not be eligible to play in the UEFA Europa League Play-off round against Astra after featuring for Olympiacos in their Champions League third qualifying round defeat by Hapoel Be’er Sheva. He will however be eligible to feature in the group stage if West Ham beat the Romanian champions.
The new left back will wear shirt No26 for the club.
If you missed it, the story behind this signing can be read here.
http://www.thewesthamway.com/2016/08/06/exwhuemployee-transfer-update-exclusive-leaving-loan/
Let us know your thoughts by commenting or you can head over to our forum.
http://www.thewesthamway.com/forum/topic/finally-a-full-back-2/
share