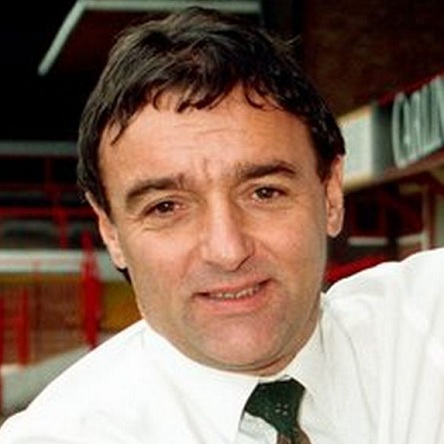 He was gone.  We had a feeling it was coming but now, flicking routinely through page 302 on Ceefax, the news was there to see in that flickering blue BBC font.   John Lyall had been sacked as manager of West Ham United.  Lyall had been the constant through my early years of supporting the claret and blue. A throwback to yesteryear when West Ham managers, coaches and senior players would huddle around tables in greasy spoons and pontificate on the beautiful game.

In these times of Moneyball and in-play Opta stats, it’s hard to believe Ron Greenwood would explain his football philosophy with little more than salt, pepper and a bottle of ketchup at his disposal.  Lyall served his apprenticeship under Greenwood and took over the hotseat when the latter departed for national service. He had been at the club for thirty-four years as player, coach and manager.

He’d guided us to within a whisker of the title in 1986. With the likes of Frank McAvennie, Tony Cottee, and Alvin Martin approaching their peak years, the prospect of silverware returning to East London seemed very real.  The decline had been as stark as it was unexpected.

The game was changing. Under the tutelage of FA supremo Charles Hughes, English football was becoming a low-risk, percentage game with an emphasis on direct play. It was boring, repetitive stuff, the very anti-thesis of Lyall’s expansive philosophy.

Unfortunately, it was was also very effective. West Ham were being out-fought on the Saturday afternoon battlefields of the First Division. The team had developed a soft centre and Lyall, despite the protestations of senior players, had been unable to bring in suitable reinforcements.  Far from strengthening the squad of 86, the club had slowly begun to cash in on their prize assets. McAvennie and Cottee departed for pastures new. Cut-price alternatives such as David Kelly and Leroy Rosenior were poor substitutes.

In the space of just three years, the team had gone from front-runners to relegation fodder.

Something had to change.  Like many, I assumed that loyal servant Billy Bonds would be the man to rebuild the ailing club.   The board disagreed. The club didn’t need rebuilding. It needed a short, sharp shock to reboot the system entirely. That shock came in the shape of Lou Macari.

The Scot was unmistakeably one of the new breed. A strict disciplinarian, he’d turned Swindon into a robotic outfit that had achieved two promotions.   There was no questioning the efficacy of his approach. However, some twenty years before Sam Allardyce found himself in a similar predicament, West Ham fans wondered whether that ethos was the right fit for a club that believed in attractive football.

The answer became clear the moment Macari set foot on the training ground. Like many managers following a legacy, Macari made the mistake of changing too much too soon. There would be no patient build-up. It was all about percentages. Get the ball forward early and fight for the scraps.

For artisans like Liam Brady, Mark Ward and Alan Devonshire, it was their worst nightmare. And before long, other members of the team expressed their doubts about the new manager.

That lack of confidence manifested on the pitch. It soon became clear that this was a team lacking an identity.

There were brief high spots, such as a 5-0 home win over Sunderland. But there were too many lacklustre showings. Defeats to the likes of Bradford and Oldham saw us plummet to eleventh position at Christmas.

Goals had been a problem all season. Eamonn Dolan and Stuart Slater were inexperienced, Rosenior was blighted by injury and the ever-unpopular Kelly never recovered from the crisis of confidence that beset his first season.

Macari’s response was ruthless. If the current squad wouldn’t fit his system, he’d find players who would.  Out went Ward and in came Ian Bishop and Trevor Morley from Manchester City. Martin Allen and Colin Foster brought extra steel to the side and the giant figure of Ludek Miklosko, whose name gave Capital Gold commentators sleepless nights, arrived from Czechoslovakia.

The flurry of signings wasn’t a guarantee of instant results. They needed time to bed into their new surroundings.

Time was a luxury not afforded to Macari.

A disastrous 1-0 defeat to Torquay in the FA Cup cranked up the pressure. And he was being investigated  by the authorities for a betting scandal furing his time at Swindon..

He failed to appear in the away dugout for a visit to his old club and his reign ended in ignominy. Emlyn Hughes used his national newspaper column to accuse Macari of running scared, though “Crazy Horse” himself back tracked rather quickly when the ICF took exception to any criticism of their beloved club.  It was left to Billy Bonds to see the season through and steady the sinking ship.

Time has not brought fondness to reflections on the Macari era. According to many, he was one of the worst managers in our long history. On a purely results basis, it is hard to disagree. He left a divided dressing room and a team struggling desperately for direction.

However, in that dressing room were names that would play an important part in restoring – and retaining – our top-flight status. Allen, Bishop and Morley were mainstays of the mid-Nineties, whilst Ludo became one of the finest glovemen to grace Upton Park.

You would think that those signings alone would offer Macari some sort of reprieve. But prowess in the transfer market doesn’t a good West Ham manager make. You have to understand the heart and soul of a club that will always prize romance over results-driven football.