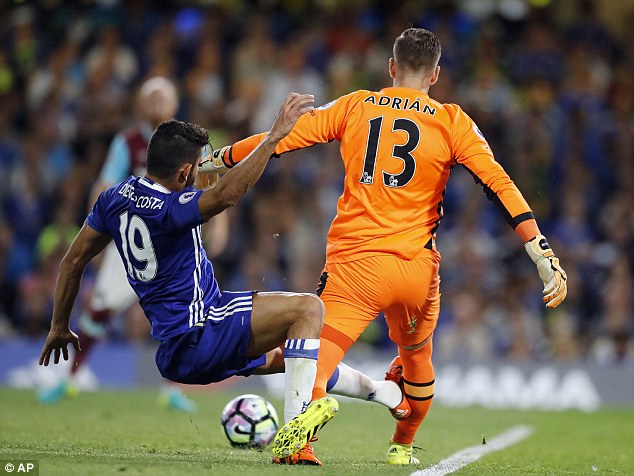 The Hammers looked to have salvaged a point after James Collins impressive strike on 77 minutes cancelled out a penalty from Eden Hazard at the start of the second half.

But Costa drilled in a low shot from the edge of the box to hand Antonio Conte his first victory as Chelsea manager in the Premier League.

In reality the Spaniard shouldn’t have even been on the pitch but Anthony Taylor totally bottled his decision on a challenge Costa made on Adrian which many including ex-referees viewed as an automatic red card offence.

The Hammers and Slaven Bilic will feel hard done by but in truth their performance didn’t deserve anything from the game.  The team were slow on the night, didn’t look confident and rarely troubled the Chelsea back four with constant aerial passes to Andy Carroll who resembled more of a Tom Hanks character from Castaway than a well supported frontman. The side were missing influencial playmaking stars such as Dimitri Payet (for most of the game) and the injured duo Manuel Lanzini and Sofiane Feghouli which obviously affected the flow of West Ham’s usual attacking prowess. To make matters worse, the Hammers lost record signing Andre Ayew, 32 minutes into his debut for the club with what looks like a leg injury. The club will surely be sweating on the results of that scan with the transfer window closure just over two weeks away.

The home side dominated the first half proceedings and could have opened the scoring after 13 minutes when Branislav Ivanovic turned Cheikhou Kouyate inside the box and fired a low shot which produced a fine save from Adrian diving low to his left hand side.

Chelsea had claims for a penalty turned down 6 minutes later after Oscar went down inside the area following a challenge by Winston Reid, but referee Anthony Taylor waved for play to continue.

The home side continued to create the best openings and came close again when Hazard raced unchallenged into the West Ham penalty box before striking a shot inches past the post.

Bilic was forced into his first change on 32 minutes when club record signing Andre Ayew was forced to leave the field and was replaced by fellow summer signing Gokhan Tore who was making his Premier League debut against his former club.

Adrian came to West Ham’s rescue once again on the stroke of half-time when he was in the right place to tip Willian’s curling free-kick over the bar.

Bilic would have been hoping for a better response in the second half, but they got off to the worst possible start when Michail Antonio conceded a penalty just after the re-start.

The Hammers winger brought down Cesar Azpilicueta inside the box and Taylor immediately pointed to the spot.

Hazard fired the spot kick straight down the middle giving Adrian no chance in the West Ham goal.

Bilic made his final change when he brought on Dimitri Payet into the action and the move paid off as the Hammers drew level on 77 minutes.

Payet’s corner fell perfectly to Enner Valencia who saw his shot blocked. The rebound fell to Collins and he made no mistake striking a fierce shot into the corner of the net.

But the Hammers were unable to hold on to a draw.

Bilic wont have too long to dwell on tonight’s result and performance as the club travel to Romania on Thursday to face FC Astra in the 1st leg of their Europa League Play-off tie against the side that eliminated them from last season’s tournament.