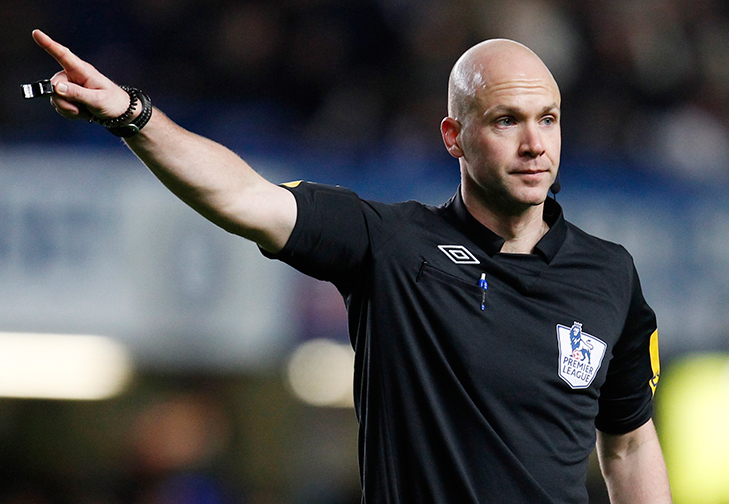 New season, new rules and a lot at stake in this highly anticipated season. After a 7th place finish last season, a potential place in Europa League group stage and smashing our transfer record, it’s looking very good for West Ham. Gameweek 1 of the new Premier League season started at Stamford Bridge with a highly anticipated London derby against Chelsea. The referee appointed for this game was Anthony Taylor.

Business as usual for Taylor in the first half with a handful of cautions but nothing that he couldn’t handle. The first caution of the game came within the first four minutes when £32m summer signing N’Golo Kanté got beaten to the ball by Andy Carroll before Kanté hacked down the West Ham front man. Kanté couldn’t have any complaints after that kind of challenge as it came from behind but also as Carroll was progressing to the Chelsea half.

One of the biggest decisions Taylor had to make in the first half was to decide whether to award a penalty against Winston Reid after Oscar went down in the West Ham penalty area. For me, Oscars fall was far too theatrical. Oscar was in possession and skilfully flicked the ball past Reid and there was contact from Reid without a doubt, however the contact wasn’t enough for Oscar to go down like he did and his fall clearly didn’t convince Taylor that it was worthy of a penalty.

Diego Costa was the second player to join Kanté in Taylor’s book after Costa was protesting Taylor’s decision to wave away Chelsea’s penalty appeal but in an unacceptable manner. This season, new powers have been given to the referees to protect themselves but also their assistants. Referees have been urged to take a stronger stand on “intolerable behaviour” by players. This includes running to contest decisions, arguing face-to-face with officials, and “visibly disrespectful” actions will result in yellow cards. This makes sense for me and I don’t understand why this hasn’t been brought in sooner, but it’s better late than never. You will see a lot of cautions this season because of this new inclusion and it’s no surprise that Costa was penalised.

Collins was the first West Ham player to be cautioned after the West Ham man brought Diego Costa down just inside Chelsea’s half. It was an unnecessary challenge but rightly penalised by Taylor. There were a couple of strange decisions, one being penalising Enner Valencia for attempting to challenge for the ball when at hip height and Cahill attempted to challenge with his head. Taylor gave a foul for a high boot against Valencia and this is incorrect in my opinion. The fact Cahill put his head in an unnatural area to challenge for the ball meant this shouldn’t have been awarded against West Ham.

Just two minutes into the second half and Taylor correctly awarded a penalty to Chelsea after waving away one in the first half. Michail Antonio decided he was going attempt to run the ball out from the back before getting challenged by César Azpilicueta. Antonio made a horrendous attempt to win the ball back but brought down Azpilicueta at the same time and kicked the ball away in frustration which resulted in a caution.

Arguably the biggest question West Ham fans are asking – Should Diego Costa have been sent off for a second bookable offence for his challenge on Adrian? A natural instinct as a striker is always going challenge for every ball and will chase every ball. However, Diego Costa’s challenge was late, it was reckless and it did deserve a second bookable offence. Costa’s reputation is always going to cause a stir because of the type of player he is and he can be over aggressive on more occasions that not. If this was on anywhere else on the pitch, Taylor would have more than likely blew for the foul and cautioned the player, or in Costa’s intense, second bookable offence. Therefore, I feel that Costa is extremely lucky to still be on the field and I do sympathise with Taylor as we do have the luxury of multiple instant replays but it’s a decision he did get correct amongst many he did get correct which is a shame on his overall performance.
After Taylor got a high boot decision incorrect in the first half, Taylor got a different high boot decision correct as Azpilicueta challenged for the ball at shoulder height with Andy Carroll challenging with his head. This was the correct decision rather than the Valencia challenge at hip height on Cahill. Azpilicueta protested and was booked on this occasion.

Was Kanté lucky to stay on the pitch as well after the foul on Dimitri Payet? Not for me on this occasion. Not every foul is punished with a caution or red card. Kanté was generally going for the ball. Admittedly, he was late but the attempt was there and Taylor correctly blew for the foul. Diego Costa was amongst it again when he ran into Arthur Masuaku and went down inside the box. Costa was obviously looking for a penalty but Taylor was having none of it and waved it away almost instantly. Within the last couple of minutes of the game, Pedro was cautioned after a nasty-looking late challenge on Reid. A caution was the minimum punishment needed for that type of late challenge with Taylor right on the spot to make that decision.

Overall, not a bad start to the season for Taylor. He continued the trend of referees in this opening weekend to attempt to stamp out intolerable behaviour by players. Arguably, the biggest decision was to determine whether Costa’s challenge on Adrian was deserved of a caution or not. Taylor thought not, but replays showed that there was defiantly a case for a second bookable offence. A very poor performance by West Ham with not much going forward, a lack of composure and we didn’t get into the game. We couldn’t keep the ball nor pass to our own players. We cannot rely on Payet to change games as much as he is by far our best player. We need other players to stand up in instances like this game against Chelsea and Slav has a lot to think about before the first Premier League game at the London Stadium against Bournemouth next week, which fans are expecting to win. Let us know your thoughts @TheWestHamWay and @SamRoyden using the hashtag #AskWestHamWayRef with your thoughts, opinions and questions.