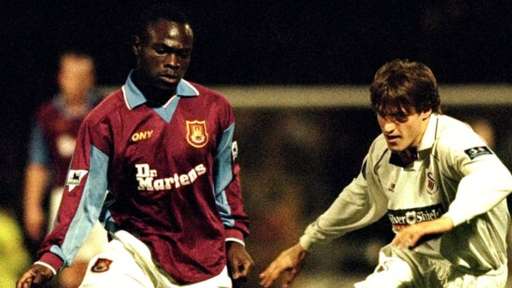 This is written by Neil Taylor @neilpt7e

Ok, where to begin? I can only imagine once upon a time there was an ‘ammer out on a stroll, on this walk he happen to cross paths with a Millwall fan who, in his rather haunting accent said “cross my path with silver, I’ll give you some Heather and you will have great fortune!”

Now our ‘appy ‘ammer is no gullible fool, he doesn’t believe in hocus pocus, his wellbeing is in his own hands and he’s doing alright thank you very much.

“No thanks chum” he replies (there’s no point writing what he really said, EX will only edit it!!) “Great sorrow and much stress will follow you if you don’t” was the answer. “Do your worst my dear friend”! AND BOY DID HE…..

Now, I, like countless millions of others don’t believe in curses, witchcraft or hocus pocus, however, I’m starting to think strange things are afoot!

In my time supporting the ‘ammers there have been so many instances that have occurred: –

Blackpool affair, in a nut shell, game was obviously going to be called off due to poor weather, basically snow on the pitch. The night before the game Moore, Greaves, Dear and Best, along with the clubs physio Rob Jenkins visited a nightclub, had a couple of drinks, returned to the team hotel in the early hours. The game unbelievably goes ahead and we get stuffed 4-0! Ok these things happen, nothing sinister here, move along.

The four game semi-final against Stoke, where in the last game Ferguson (GK) got kicked in the head had to go off for treatment. Clyde Best was our nominated replacement keeper didn’t fancy it so Moore went in goal and even saved a penalty, only for Stoke to convert the follow up! We eventually lost 3-2 with a very dazed Ferguson returning in goal! Ok that’s football.

Our best finish in the top flight, 3rd, Europe here we come. Oh no wait, English teams are banned from Europe, thanks Liverpool. Obviously there are tragic circumstances to this story so I will move on.

FA cup semi-final versus Forest, losing 4-0 doesn’t tell the whole story with this one! Only 20 minutes old and the ref (if you can call him that) Hackett sends of Tony Gale for a professional foul. Now this is common place in football these days but back then the rule for denying an attacker a goal-scoring opportunity was only altered a few days before the game took place!! Gale who became the first player to be sent off for denying a goal scoring opportunity even insists that his following suspension caused us to miss out winning the second division championship! I’m starting to feel things may be against us.

I’m not sure of the year but reading back on some of Redknapp’s interviews I’m guessing about this time that we played a couple of Ukrainians in a behind closed doors friendly against Barnet. We won 1-0 with one of them scoring the winner. Valued at around £1m, Harry thought it was too much of a gamble and said NO to Andrei Shevchenko! Don’t worry this must happen at most clubs.

Worthington Cup quarter-final versus Villa. We beat Villa after penalties to progress to the semi-final. Nope we didn’t. Why you ask, because we played Manny Omoyinmi for six minutes! In those two minutes according to Redknapp he touched the ball twice and gave it both times to a villa player! The problem with playing him at all was he had already played in the league cup for Gillingham (on loan). A replay followed although there was a strong possibility of us being thrown out and we lost 3-1! Could only happen to us.

Relegated with the most points. Normally getting over the magical 40 pts in the Premier League insures your Team stays up. Not for West Ham!! No, we managed 42 pts which put us 2pts from safety. West Brom finished 19th with only 26 pts with Sunderland bottom on 19! Ok I’m getting a bit fed up now.

Playoff final versus Palace. We turned up knowing we were going back to the Premiership, fans and players alike I think. Obviously we would lose 1-0! For God sake West Ham.

In a game that I haven’t had the heart to watch back, we were seconds from winning against Liverpool. Only for Lionel Scaloni who had only needed to hoof the ball into row Z, scuffed it and it ended up falling to Steven Gerrard to smash it in past Hislop and taking the game to extra time. We lost on penalties and I have nothing more to say as I’m welling up thinking about it!!

I can’t believe were going into the big time now, we’ve taken over by the Icelandic’s. Ok I know our new CEO used to run a biscuit company and the owner is a recovering alcoholic of 30 years and has done time for bookkeeping offences but what can go wrong! Let’s face it Iceland is one if not the safest financial sectors going. It lasted for two years and our owner Björgólfur Guðmundsson declared for bankruptcy owing $750m and more importantly nearly seeing West Ham going out of business. OK my friend I’ll take that heather now.

We sign Tevez and Mascherano. Well I think we did although there seems to be a bit of confusion as to who owns them! Well Mascherano is unable to replace Hayden Mullins in midfield so he goes and as for Tevez he helps us avoid relegation. That’s ok then, nothing bad happened. Oh that’s right Sheffield United are a bit miffed about going down and after a lengthy court room battle which we couldn’t lose. We lost and had to pay them around £25m to help soften their relegation. Picture me sitting in a strait jacket banging my head against a wall.

I will just refer you back to my previous article about how well these have gone for us. On the back of that article with lost another record signing with the club announcing Andre Ayew needs an operation and could be out for four months!

In addition to all of this, whilst writing this article my Word document is behaving very oddly, I stubbed my toe whilst bringing in a coffee. The coffee has gone all over our cream carpet and I’ve just noticed that one of my favourite fish in my marine tank is dead!

So there you have it WE ARE CURSED!!