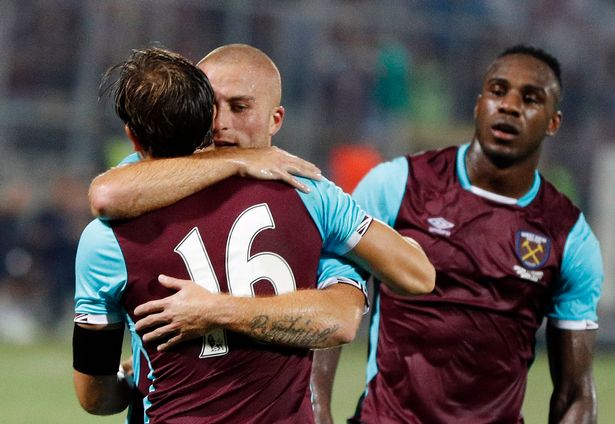 This written by Jack Sullivan

Hello all, I realised that I had not done a column for a while and thought now the season has started again, maybe I should do one. There is a lot to talk about us and sadly injures are right at the heart of everyone’s conversations.

I am going to start with something much happier, which is new arrivals. The newest arrival is Jonathan Carlleri, someone who is very highly rated in his country and Brazil. Lots of top clubs fancied him and he now will be playing in claret and blue until the end of the season. The deal is a loan deal with no option to buy, yet I can’t see why a deal cannot be done if Calleri can produce, which I have no doubt he has every chance of doing. Another transfer is Ayew from Swansea, of course he broke the record as our most expensive player at £20.5m. He was great for Swansea last year and now he should hopefully do the same with us. He has been bought to play all four positions – striker, both wings and behind the striker. Lots of people say he is not a natural striker, but he played there eight times for Swansea and got six goals and two assists. I am not saying he will repeat that form over a season, however that is an incredible stat! On the same day Ayew signed, we also signed Arthur Masuaku. Masuaku looked fantastic against Chelsea, in a very hard game and looked like he had been there for a long time. He is only 22 and could be a real asset, putting pressure on Cresswell.

Sadly, like others, Cresswell is out injured and our injury list becomes very long. Most of which are only minor, however they have all come at once! It is a real problem as Sunday is certainly a winnable game and for me an important one with City the following week. The list is long, but after the international break we should have a fully fit squad apart from Ayew, Cresswell and Sakho. I think if the same had happened last year we would of had a real problem, but this year it is a problem we can manage and are still able to field a strong team. In my opinion the team is better than we fielded in our first season back in the Prem.

The final part of the column is just going to be a short report and my opinion on the past two games (Chelsea and Astra). Chelsea for me was a hard game, the team dug deep and even though it wasn’t our strongest side, we really gave Chelsea a game. People said they were disappointed to not see us bring the game to Chelsea more, but it is important to mention that we didn’t have a team to do that, therefore we dug deep, sat back and waited for our chance. I have to say the plan also most worked too, but sadly Costa (who shouldn’t have been on the pitch) scored. Kante was someone else who maybe should have been sent off. Costa’s challenge on Adrian, for me was almost a red card. For the ref to not give a yellow was joke, he also ran into the crowd after he scored, which is also a bookable offence, but again the ref bottled it! I am not saying we should rely on the ref, as for me that is the last thing we should worry about, even so, it does help when he is fair.

Yesterday was once again an interesting adventure for us all. Romania was much nicer than I thought, with some beautiful old buildings. As always, everyone is so helpful and it was a pleasure to go to Astra. I like going to grounds like that and I am really enjoying the European adventure. The 1-1 result was possibly the worst bit about the trip, but I thought overall we were very comfortable with some great attacking play from Antonio. Antonio was on the wing and I think that is where he will be playing for most of his West Ham future, depending on injures. His pace, power and eye for goal can really scare any defence. Our subs were very defensive as we tried to defend the lead, this sadly backfired as I’m sure you all know, but a draw is still a good result and really does put the ball in our hands. I hope we can get into the group stage and I am very hopeful of doing so. Reece Burke was also great at LB, barely putting a foot wrong and for me was man of the match as he was playing out of position and off the wrong foot. It is important to stress that Arthur is cup-tied, not injured and will be back for Sunday!

Before I end this column, I would like to say I wish our loanees all the best and a special mention to Cullen who has already hit the ground running in league one. I hope you have enjoyed my column, sorry if it is not the best read, however I am writing on the way back from Astra at 1.00am! I will try and make my columns more regular now the season has started too.