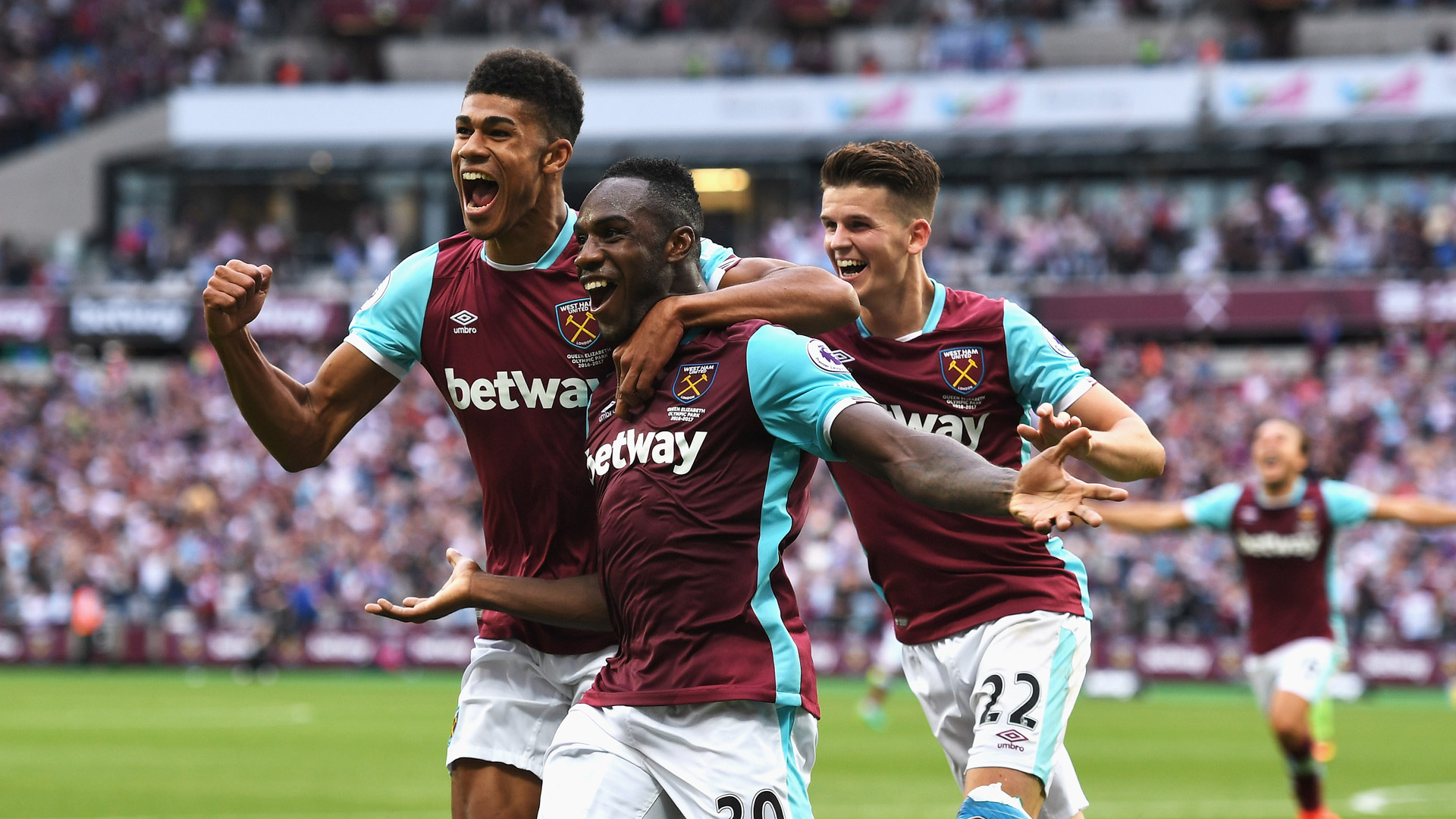 West Ham won 1-0 today against AFC Bournemouth in the first Premier League match ever in the Hammer’s new Olympic Stadium home.   Despite the long-awaited excitement surrounding the home side’s new grounds, the feel in East London has been one of frustration.  An epidemic outbreak of injuries has struck the starting XI of the team over the past two weeks.  Late word last night that Andy Carroll had also picked up a knee injury during his play in the Europa League meant that West Ham’s attacking options were severely limited.

Fortunately as play opened, Bournemouth showed similar dysfunction in their own attack.  During the first half of play it was primarily a defensive affair.  Neither goalkeeper suffered too much stress during the opening 45 minutes in the sun of an East London Sunday afternoon.  Enner Valencia, taking the start at striker in place of the injured Carroll and Ayew, was unable to find that first goal in the new stadium.  He did have the first shot on target in the 40th minute of play; however Boruc was able to handle the strike.  Two minutes later Antonio, finally playing in his preferred wing spot, had another shot, but failed to threaten the goal.

For all of West Ham’s problems in the final third of the pitch, Eddie Howe’s side showed even less action in the opening half of play.

During the second half, Howe seemed to inspire his players a bit as they dominated the opening ten minutes of play.  Adrian was forced into action a number of times, including a 53rd Joshua King strike which the Spaniard acrobatically tapped over the crossbar.

In the 61st minute, Bilic felt he needed a change of pace at forward and replaced Valencia with Jonathan Calleri.  He also switch Antonio and Tore to opposite side wingers.  The change failed to yield immediate result as the Cherries played stubborn defense behind the ball.

The sleepy home opener for the Hammers changed greatly when Kouyate was striding down the far touchline on counter attack and Harry Arter, already on a yellow, pulled him to the turf.  With Arter receiving a red card, Bilic quickly changed the makeup of this attack.  He brought 20 year old Ashley Fletcher in for Nordtviet, as a second forward to find the match winning goal.

Moments later the Stratford crowd cheered as Antonio driving towards goal sent his cross towards Fletcher.  Drifting too high for Fletcher, Tore chased the ball towards the opposite touch line, turned it into the box, and crossed back to Antonio, who was crashing from the far side post and his header gave West Ham their long-awaited lead.

Hoping to preserve the slim lead against a ten-man squad, Bilic brought on Pedro Obiang for Tore, to give more defensive aggressiveness in the midfield.  The Cherries weren’t about to go into the night quietly.  During the final minutes of the stoppage time a Bournemouth freekick fell to King who sent a mighty strike straight to Adrian who parried it back to Francis.  His shot was blocked by a heady Winston Reid standing on the line averting disaster in the late minutes of play.

Bournemouth had a corner kick in the closing seconds but it was sent clear to Mark Noble and Calleri who had a clear drive to goal beyond as the final moments of added time ticked off.  Calleri’s shot on goal was wide, but Craig Pawson’s final whistle gave West Ham their first Premier League victory of the season and first at the new stadium.

With at least seven of the top eleven players for the West Ham first team healing from injury this week, West Ham will have to patch together another close match to win the second leg of the Europa round with Astra Giurgiu on Tuesday evening.  The sledding doesn’t get easier as Sunday West Ham travels to Manchester City to face their expensive starting XI.  Slaven Bilic will certainly welcome the international break before the Hammers return home to face Watford on September 10.  By then the summer transfer window will close and there will be a lot more questions answered regarding the depth of this seemingly fragile team.

But after a week of crying for more transfers, outcry over standing and sitting, and a longing for the familiar feel of Upton Park, West Ham walked off today with three points and a much better feel going into a brutal week of football.