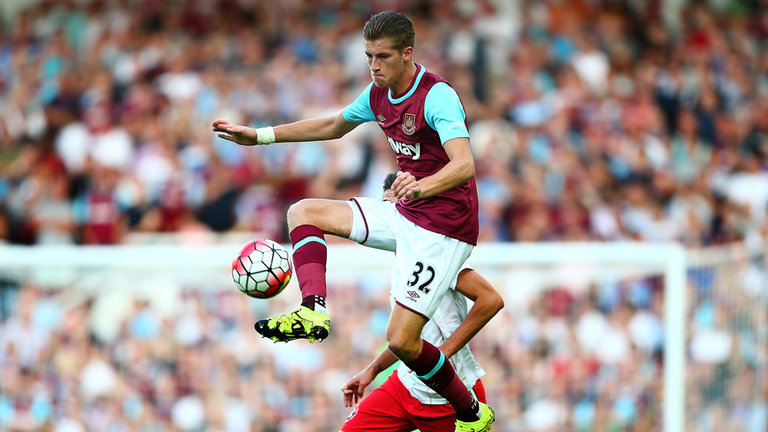 Hammers youngster Reece Burke has signed a new four-year contract with the club.

The outstanding young defender and lifelong Hammer has been rewarded for an outstanding 2015-16 season by putting pen to paper on a deal that will keep him at the club until 2020.

The Newham-born Academy graduate broke into the first-team squad in spring 2014, was named Young Hammer of the Year in 2014/15 and secured 7 awards whilst on loan at Bradford City last season.

Still just 19, Burke is already approaching 50 senior appearances and impressed hugely as a left-back during the Hammers’ UEFA Europa League play-off round first leg with Astra.

Burke stated “Obviously as a West Ham fan as well as a player, it’s fantastic to be involved with the Club during this period. It’s still sinking in to be honest, the move and the changes here. Over time, I really believe everything will settle in, and it will feel like home very, very soon.

Having signed his new long-term contract, the young centre-half is hopeful of being handed another chance to impress when Astra visit the Hammers on Thursday evening.

“It’s an unreal Stadium to play in,” he continued. “It’s been done really well, the entire arena, and the pitch and surface is quality too. I played there against Juventus at right-back and really enjoyed the experience. If I’m playing again, which hopefully I will be, I’ll do my best to help the team progress to the group stages.

“I’m hoping to be involved, and if Slaven asks me to do a job anywhere on the pitch I’ll definitely be up for it. The Club has a few centre-halves this season so there’s a lot of competition there. If he asks me, I’m just going to say ‘Yes’.”

Looking further into the future, Burke expects to be given the opportunity to go out on loan again this season – potentially to a Championship club after impressing for Bradford City last season in League One.

“This season for me, another loan move may happen for me,” he revealed. “I think I’m going to try to do the Championship – the next step – and see how the season goes hopefully playing Championship football and I’ll hopefully get another load of games under my belt.

“I want to build on that experience and come back next year even better, just similarly building like I did last season. Hopefully I could have a similarly positive season this year in the Championship.”

Retaining Reece was one of the club’s main priorities this Summer after letting James Tomkins move to Crystal Palace. The Hammers will turn their focus to Reece Oxford now in the hope that they can get another one of their young stars under long term contract.