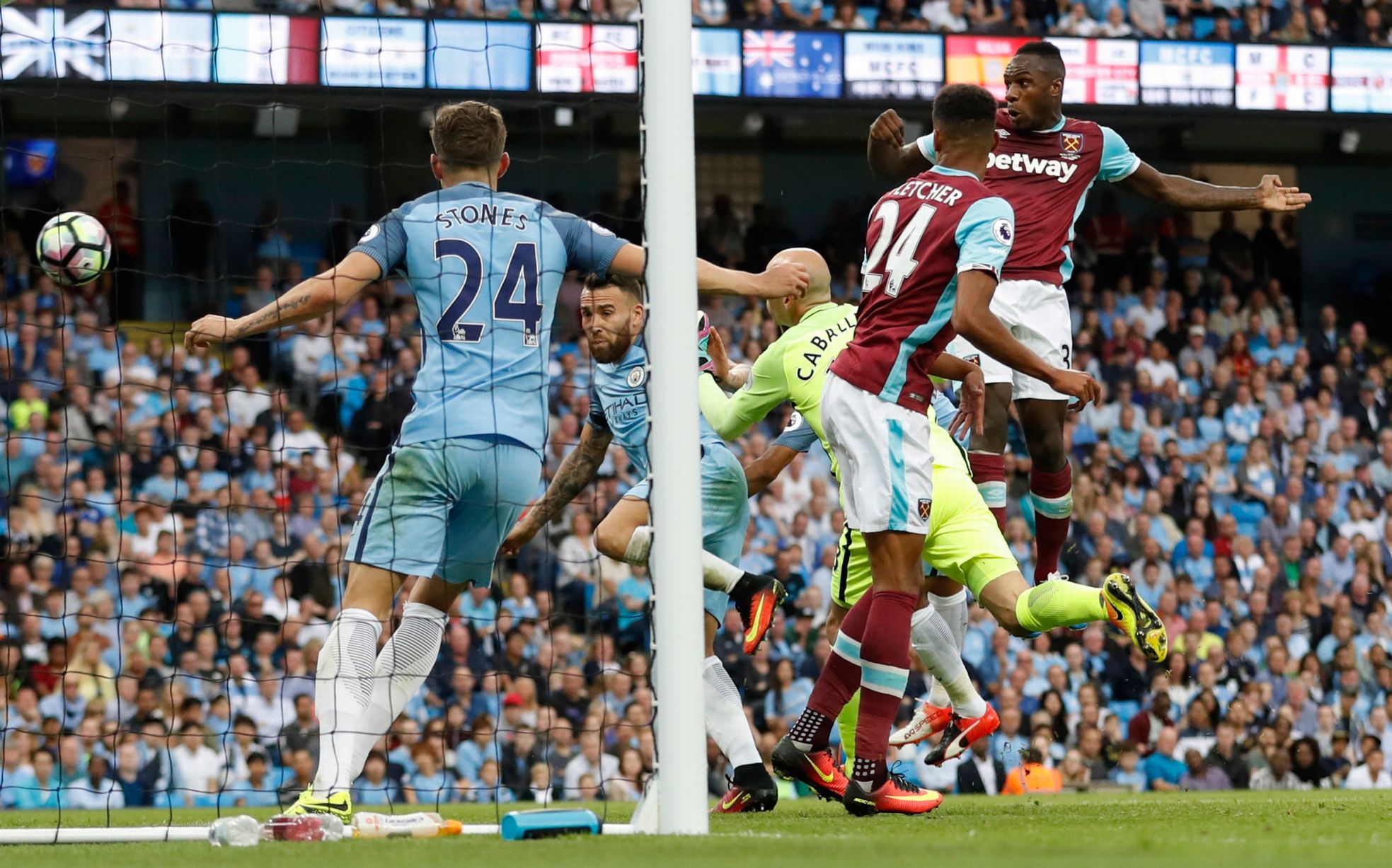 West Ham came to the Etihad Stadium to play the Manchester City  in similar fashion to last year’s early-season meeting;  A stinging exit from the Europa League at the hands of Astra, and then a meeting with the Premier League leaders.  With Manuel Lanzini recovered from international injury, the Hammers at least had one more piece of the attacking puzzle on their bench.  Once again Dimitri Payet was absent from action today.  Without Payet and the likes of Andy Carroll and Andre Ayew, West Ham has shown difficulty finding any creativity in their attack.

Hoping to slow down the massively compensated City side, Slaven Bilic started three central defenders in Ogbonna, Reid, and Collins.  He also allowed 20 year old, Ashley Fletcher, the former Manchester United academy product, to start at forward against his traditional rival. However none of these changes gave much help to West Ham in their efforts to slow down City’s relentless attack.

Only seven minutes in David Silva found Nolito, who wisely cut back to Raheem Sterling, and fired it into the top right of the goal.  Looking to answer, neither Enner Valencia nor Ashley Fletcher were finding any success in their incursions into City’s penalty area, and West Ham, as a whole, barely was able to maintain possession in the opening half.

18 minutes into the match Kevin De Bruyne fired a free kick from 20 yards out and an unmarked Feranandinho headed it beyond Adrian’s reach.  With the Brazillian’s header giving the home side an effortless lead, West Ham was desperately looking to hold serve until the half.

Despite a few defensive close calls to close out the half, West Ham was able to leave the field down 2-0.  During the half, Bilic brought Sam Byram on for Tore, and was able to move Antonio from wingback up to his preferred true wing position.  The move proved wise when in the 58th minute Arthur Masuaku drove towards goal and crossed to Antonio, whose far post header was very reminiscent of last Sunday’s against Bournemouth.

With the score now a manageable 2-1, Bilic sought to find the equaliser by brining Lanzini on for Valencia.  These changes did make West Ham more competitive and they showed some spring in their step.  Winston Reid took an elbow to the head in the 76th from Sergio Agüero, who was fortunate to miss the view of the center referee, Andre Marriner.   Reid was replaced by Jonathan Calleri, who added more pace to the West Ham attacking midfield.

The improved pace was unable to find the second goal for the visiting side as regulation time ticked away.  During the four minutes of stoppage time, City found a third goal as Sterling drove towards Adrian, who moved off his line to challenge the young talent.  Sterling shot a slow grounder that rolled around the goalkeeper and James Collins, and into the empty goal to ensure the victory for Manchester City.

For fans of West Ham United, it has been a trying week.  Mounting injuries, an embarrassing exit from the Europa league, and a failure to sell off some of the players that the board was counting on to free up wages for some late window purchases, all have given the Claret faithful a miserable end to their summer.  There is a saying “if we didn’t have bad luck, we would have no luck at all;” which certainly applies to West Ham as of late.

With the signing of Simone Zaza from Juventus, and more late deals possible prior to the August 31 late- night closing of the transfer window,   West Ham can improve their depth for a long Premier League campaign.  Without European football in the mix, Bilic can focus on improving his side’s position in the league and not worry about travel to far flung locales on the continent.  (Although they will miss out on a lot of revenue from the Europa League)

The international break has come at a good time for a West Ham club that needs to heal from a bruising opening month.  As injured players return to match fitness, a much different team should emerge than the disappointing team seen over the past three weeks.