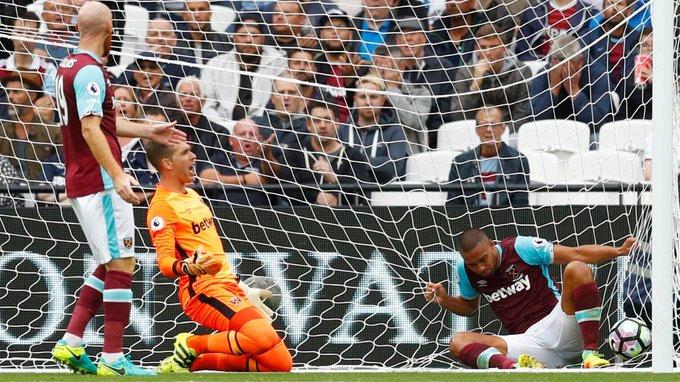 Watford completed a remarkable comeback aided by woeful defending from West Ham after firing four unanswered goals in a thrilling 4-2 victory over the Hammers at London Stadium.

West Ham looked to be in pole position after Michail Antonio took his tally to four goals in four games with an impressive brace in the opening 33 minutes.

The Irons fans were treated to another fantastic piece of skill from Dimitri Payet who produced a rabona cross to set up Antonio for the second goal.

But the Hammers just fell apart after that and goals from Ighalo, Deeney, Capoue and Holebas helped Watford secure their first Premier League win of the season.

In a fast paced start to the game, the Hammers could have opened the scoring inside the first minute.

Antonio weaved his way into the penalty area after a superb overhead kick from Zaza and saw his low shot kept out by the legs of Heurelho Gomes.

But the home side didn’t have to wait much longer before breaking the deadlock.

Antonio rose the highest to meet a corner from Payet on five minutes and directed a powerful header into the corner of the net via a small deflection of Troy Deeney.

Antonio caused all kinds of problems for the Watford defence once again 3 minutes later and his cross was turned against his own post by former Hammers transfer target, Daryl Janmaat.

Just seconds later Watford could have made the home side pay as Roberto Pereyra broke clear of the Hammers defence and crossed in for Ighalo who had the goal at his mercy but his shot deflected inches past the post via a well timed challenge from Arthur Masuaku.

It was an incredible opening to the game and the chances continued as Manuel Lanzini raced unchallenged towards goal and fired a shot just past the post.

Watford raced down the other end and Adrian made a fine save to deny Ighalo.

The Hammers doubled their lead in spectacular fashion just after the half hour mark after Masuaku’s ball picked out Payet down the right hand side.

The Frenchman produced an outstanding piece of skill as his rabona cross picked out Antonio and he made no mistake heading the ball into the back of the net.

But Hammers failed to hold onto their lead and Watford staged a dramatic comeback which started just 4 minutes before half-time.

Ighalo picked up the ball down the left hand side and took on Sam Byram, before seeing his right-foot shot deflect take a wicked deflection off James Collins and the ball flew past Adrian.

In an amazing turnaround Watford managed to level the game on the stroke of half-time.

Collins and Adrian got themselves into a right mess and the loose ball fell to Deeney, who chipped the ball expertly into the corner of the net.

The equaliser gave Watford the upper hand and they came out in the second half brimming with confidence.

The Hornet’s took the lead on 53 minutes when Pereyra crossed the ball in for Capoue who fired a powerful shot past Adrian into the roof of the net, the French man was left totally unmarked at the back post.

Watford sealed all three points on 64 minutes when Ighalo picked out Holebas and he fired his shot past Adrian to round off a miserable afternoon for the home side.

In truth this was an abysmal performance from the Hammers, especially from their backline aside from Masuaku. The defence was also given no protection throughout the game from the midfield.

Slaven Bilic blamed a lack of confidence on the Hammers collapse but in truth the back five have underperformed since the start of the season, conceding 9 goals in the 3 league games that they have had to face 11 men.

Many fans have commented on the poor performances of Collins and Reid and many more are asking why Angelo Ogbonna (our best defender last year) is sitting on the bench when we desperately need some stability back there. It remains to be seen how the Manager will react to this performance and if the likes of Ogbonna, Arbeloa and even Reece Oxford may get an opportunity at the Hawthorns next week when the club visit West Brom.

The dramatic defeat leaves the Hammers sitting in 17th position in the League after 4 games and certainly not where anyone expected them to be right now.