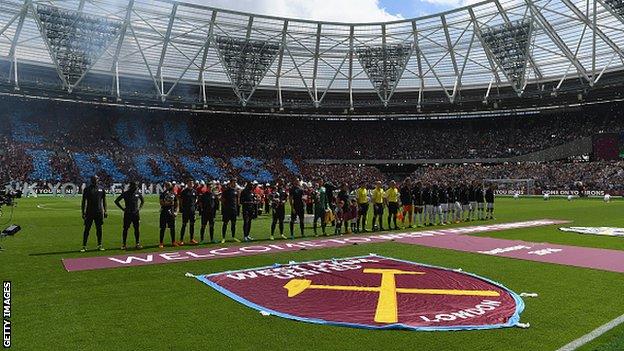 So this is going to be different to my usual type of column as I just want to concentrate on the match rather than much else.

I have started to get into quite a routine at West Ham, meet up with a few mates and then go for some beers and arrive to the ground about twenty minutes before the match. I then catch up with all the friends who sit with me and it feels like an exciting day out. I prefer this to Upton Park where you couldn’t meet anywhere as all the pubs were rammed and I always had to drive to the matches as the trains were so poor.

The match started well. The first thirty minutes were amazing and the atmosphere was spot on. The team looked on fire and I could see nothing but a big win coming, oh how wrong I was. Terrible defending by Byram and a combination of Collins and Adrian meant they were back in the game before half time which was ridiculous. This is where the fun of the day started to decline.

I went to the toilets, as always the prematch beers never give my bladder an easy ride! As you go to the toilets in the East Stand there is no proper queuing system because people filter in from all angles. A couple of old boys took offence to the younger lads pushing in and asked them to go to the back of the line. I used to see this a bit at Upton Park and usually the accused would go to the back reluctantly. In this case both of the people asked swore and called the old men a word beginning with C and it wasn’t carrot. I went outside to the food kiosks and bought a chicken burger and a coke as I hadn’t had any lunch, setting me back £10. In some ways this is nice to be able to step outside and use the outside facilities but in some ways it is worrying because any one could get in without ticket as there are no checks going back in.

I got back to the seat and the team just looked like another team in the second half. No effort, terrible defending again and little attacking threat. It was in the second half where the atmosphere started to turn to a horrible vibe. Where I am sat I could see fights breaking out to the left of me, to the right of me and where the away fans met the stewards. The stewards do not do anything, they stand there and watch. It is their job to make sure the supporters behave. The problem is they are all young kids used to dealing with athletics and concerts they are not trained. They need to be put amongst experienced and loyal stewards from Upton Park. They also have no police presence backing them up. Why are the police not in the stadium?? I just do not understand this. Apparently they have to be called in if something serious happens. Thankfully the club have now insisted that E20 have a police presence and this should help with the situation. The police will deter people from fighting and deal with it quickly if they do.

Considering every home game now I have been asked if I have been searched and said yes and got through every time, it will not be long before something serious does happen. What worries me even more is that we have only played Bournemouth and Watford, teams I considered us to be friendly with.   I dread to think what happens when we play Spurs or Chelsea. The club have again made it very clear to E20 that this is not acceptable and that the stewards need further training.

One thing that has to be said though is that the fans part in this cannot be excused. Yes it was a poor result, yes some fans are clearly wound up about the standing and sitting but you don’t need to turn to violence. You cannot excuse someone who comes to a game and fights with his fellow fans regardless of any other factor. Yes I believe this is happening more because of the terrible stewarding but nonetheless these people need bans immediately. I will not be taking my kids to the new stadium (something I had planned to do) until this is sorted out.

The performances on the pitch do not help the situation. Had we won that game we probably wouldn’t be talking about all the fights now that we are. I think I would make three or four big changes for the WBA game. I think Ogbonna must play. At the moment I would say instead of Reid but Collins hasn’t exactly been on form this season either so I am not overly fussed which one goes but Ogbonna must start. I think we need to get Arbeola fit ASAP as Byram was very exposed at right back and I think we need someone experienced there to come in. I would also think about dropping Adrian for Randolph. I think Adrian has been weak on a number of goals this season already whereas Darren hasn’t let us down although of course this is a bit of a kneejerk reaction.

The stadium problems surprise me because the club had brought in Angus Kinnear from Arsenal and a few other directors to oversee our move to the London stadium, like they had with Arsenal. They set up supporter advisory boards dedicated to this and then quickly disbanded them. It baffles me that no family section has been arranged or agreed before and that fans were not suggested seats depending on whether they wanted to sing or not. These are things that I believe we could have controlled. Things that I cannot understand not being organised beforehand when families were choosing their tickets. The club have now agreed to relocate these families which is a positive step but one that shouldn’t have had to happen because it should have been sorted before the season.

The stewards are controlled by the Olympic committee and unfortunately we do not have much say over them. The club had a big meeting today and have lobbied the E20 for many changes in security and all for the better. Things should improve.

As for the stadium, I understand people missing Upton Park, I do! I have struggled to look at pictures of it recently because I miss going to the games there. I was very pro the move however and whilst the stadium issues have dampened my enthusiasm I think it is important to accept that there were always going to be teething problems. I also think that like anything it takes a while to get used to something new. If you have lived in a house for 26 years (like I have had a season ticket) moving somewhere new always takes a long time to feel like home especially when the landlord is not doing their job properly. The bottom line is we cannot turn back and once the results start to pick up on the pitch it will feel better. It felt good for the first 30 minutes against Watford.

I think we have to wait until the end of the season before we can fully judge the stadium. I understand the board’s decision to move to the stadium and do not hold any negativity towards them because I know this move was done with the club’s best interest at heart or so they believed. I think mistakes have been made but thankfully we look like addressing them now. When the team’s performances pick up and we are at the end of the season, then is the time to reflect back accurately on the success of the move.

I will bring more news in my next column but I wanted to have my say on the issue. If you wish to vote for myself https://t.co/hZ7oo7IzFU , the site or the podcast (see the West Ham Way Twitter Account) in the upcoming FBAs any vote will be greatly received.