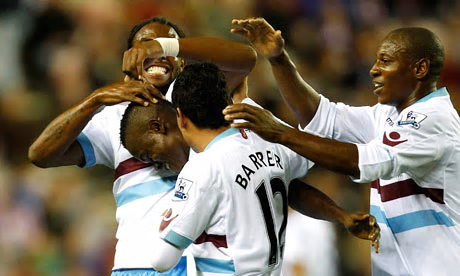 This article is written by Joe Difford @JoeDifford

With Michail Antonio’s phenomenal start to the new season back in his favoured attacking wide position, it seems fitting to look back at two past wingers who played in the famous claret and blue for this week’s Retro Hammers column.

Our first former Hammer was lightening fast and unusually strong, like Antonio, but sadly was part of Avram Grant’s relegated side.

Victor Obinna only spent one year on loan for West Ham United, but caught the eye courtesy of his powerful runs and ambitious shots from distance.

His best moment in claret and blue came when he netted a hat trick in an FA Cup clash with Nottingham Forest. His worst, being sent off in our first leg of the semi final of the League Cup, when the Nigerian kicked Seb Larsson in an area no man wants to be kicked.

The loan deal came with an option to buy from his parent club Inter Milan, but despite Jose Mourinho stating that he was one of the best talents for the future, he left after the single year in East London.

Obinna was fortunate before joining the Hammers to survive a car crash, with the vehicle flipping several times, but the winger luckily suffered no serious injuries, and did a backflip celebration himself when he netted in the League Cup at the Boleyn Ground.

Since 2014, Obinna has only played a handful of times, despite being a highly sought after player before his move to West Ham.

Another winger who failed to thrive under Avram Grant was Mexican international, Pablo Barrera. If you remember the name, it probably conjures up images of him sprinting down the wing and whipping in perfect crosses in his bright yellow boots. But of course, this never happened.

Barrera was tipped to be a great success when he joined in 2010 for around £4 million, but after a total of no goals and no assists in his debut season, it was clear that this was not to be the case.

After an inevitable move away to Real Zaragoza, Barrera began to impress, but as the season went on and managers changed, the former Hammer dropped down the pecking order.

Barrera now plays his football at Mexican side UNAM, and joins Victor Obinna on the list of former West Ham wingers who were expected to be great, but failed to live up to expectations.