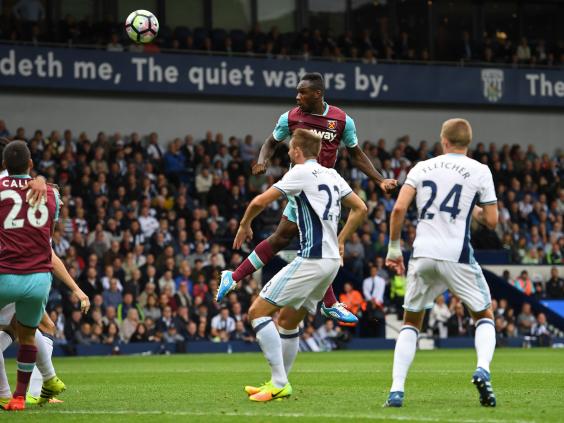 Deja vu for the Hammers once again today as they let another side score 4 goals against them with a pitiful performance at the Hawthorns as they were beaten 4-2 by West Bromwich Albion.

The hosts sped into a first half lead, scoring from the spot through Nacer Chadli before Salomon Rondon and James McClean made it 3-0 before half-time.

Chadli grabbed his second after the break to pile on the misery for the Hammers, but Michail Antonio – with his fifth of the campaign – and Manuel Lanzini (from the spot) gave the visitors a glimpse of a potential comeback.

However, the Baggies held on to condemn Slaven Bilic’s side to their fourth successive defeat.

The game began in disastrous fashion for the Irons as Arthur Masuaku was twice penalised for handball in the space of a minute, leading to West Brom’s opener from the penalty spot.

Former Spurs man Chadli sent Adrian the wrong way from the spot to make it 1-0 after just eight minutes.

The Hammers, who ended the half with 72 per cent of possession, then began to find their rhythm, and had their first chance of note after 16 minutes when Simone Zaza turned Dimitri Payet’s corner just wide.

Bilic’s outfit had their best chance to level the game when Payet, in plenty of space, picked out Antonio in the box but the winger could only fire straight against Foster.

The miss was a costly one as the hosts went on to double their lead straight away. Angelo Ogbonna’s charged down clearance found its way to Rondon and the Venezuelan forward took full advantage, firing through the legs of James Collins, leaving the unsighted Adrian with no chance in goal.

And things went from bad to worse for the Hammers a minute before the break. Phillips’ corner, not sufficiently cleared by those in Claret and Blue, gave Chadli a chance to shoot. It was McClean, however, who was first to react, turning the Belgian’s effort into the back of the net.

West Ham began the second half like they’d spent much of the first; on the front foot. Antonio had an effort saved after 51 minutes and substitute Jonathan Calleri had a header flash across the box from fellow substitute Sofiane Feghouli’s centre.

But the Baggies made it four eleven minutes into the second period when Rondon, breaking from a West Ham corner, ran the length of the attacking half only to give Chadli a tap-in and his second.

Though the hosts now had four, less than an inch denied Payet the game’s best goal on the hour mark. His free-kick struck the inside of the post and rolled along the goal-line, but a minute later, the Frenchman would provide something for the travelling Hammers to cheer.

His cross found an unmarked Antonio inside the box who nodded home a fifth goal – and header – of the season.

With the Baggies rocked, the Hammers gave themselves further hope, as Payet was fouled inside the box by left-back Brendan Galloway. Manuel Lanzini stepped up to convert the spot-kick and make it 4-2.

Although the Hammers slightly sugar coated this collapse with a much improved second half performance especially after Feghouli was introduced, it certainly doesn’t hide the fact that this side has struggled to defend against two of the worst teams in this league in back to back games and also struggled for long periods to create much going forward. Bilic needs to turn this around and he needs to do it immediately. Aside from Masuaku, Nordtveit and Zaza these are the same players that looked superb in games last season but they currently look nothing like the team that so nearly qualified for the Champions League just 4 months ago.