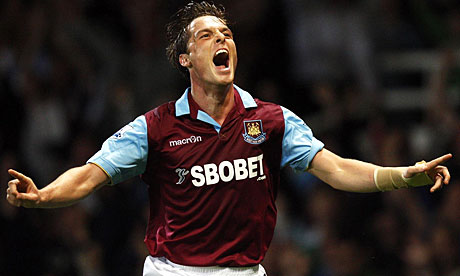 This article is written by Joe Difford @joedifford

This week’s Retro Hammer made his first television appearance at the age of thirteen, featuring in a McDonald’s advert, doing keepie uppies.

Aside from this commercial, the pinnacle of his career was at West Ham United, where he earned an England call-up and a number of club and domestic awards.

If you haven’t already guessed it, we’re talking about the legend that is Scott Parker.

Scott graduated from Charlton’s academy and made his first team debut almost twenty years ago, when this author was just three.

Since then, he has played for Norwich, Chelsea, Newcastle, Spurs and Fulham, as well as the mighty Hammers.

Parker’s most memorable season was a sad one for the Hammers, as they dropped down to the second tier of English football. But despite the poor team performances, he stood out as one of the league’s top individuals, and picked up the Football Writers’ Association Footballer of the Year prize.

Following relegation, the talismanic midfielder handed in a transfer request and moved to Tottenham in an attempt to keep his place in the England side. It is a testament to how loved and appreciated the man was, that he could do this and still be remembered fondly by the vast majority of Hammers.

Scott played in all four of England’s EURO 2012 matches before they were knocked out, and also has four sons.

The number eight netted twelve goals during his time at West Ham, including a few world class finishes against Chelsea and Liverpool.

Since he hung up his claret and blue shirt for the last time, Parker has impressed with Spurs and moved to Fulham where he is still trying to help them back into the top flight.

He may have blossomed late on in his career, shone in a relegation season and jumped ship to Spurs, but Scott Parker will always be remembered for his composure, quality and heart every time he stepped out with West Ham United.