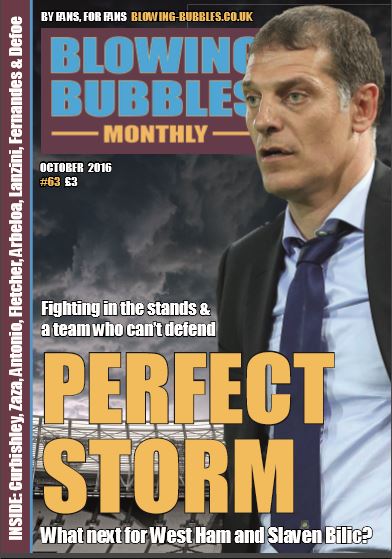 Alan Curbishley admits he was baffled by Carlos Tevez not scoring for 20 games during his time in charge of West Ham – something fans fear might happen for Simone Zaza, if at all!

In an exclusive interview with Blowing Bubbles Monthly, the former manager said that despite Tevez not speaking any English when he first spoke to him, the Argentine was happy to battle relegation.

“I was never put under any pressure by anyone to pick Tevez, but until the Spurs game [we lost 4-3], he hadn’t scored for 20 games – how is that possible for a player like him? “Even though we lost that game against Spurs, finally seeing him do what we’d signed him to do clarified things in my mind. He’d found a situation he was happy with, and everyone else around him responded. “Read more from Curbishley in Blowing Bubbles’ October issue

Elsewhere in the popular publication, which supporters can get hard copies of at the entrance to the Olympic Park outside Westfield on Saturday, Michail Antonio and Cheikhou Kouyate have outlined their hopes for the season.

As has the voice of Formula One, David Croft, who discusses all things West Ham.

Meanwhile ex Hammer George Parris believes Aaron Cresswell’s reputation has soared since he has been injured.

Blowing Bubbles also looks forward to our League Cup game against Chelsea and asks if this is exactly what West Ham fans need at Stratford?

Lucy Woolford asks if West Ham and Zaza can make their unlikely alliance work while two writers debate whether or not West Ham missed a trick not signing Christian Benteke?

For those living in the UK who aren’t going to the Middlesbrough game, you can secure your issue here