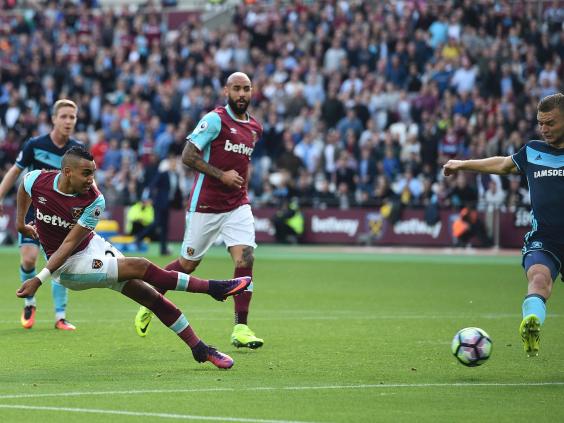 Dimitri Payet scored another world class goal as the Hammers managed to end their losing streak this afternoon and secure a 1-1 draw with Middlesbrough at London Stadium and end a run of four consecutive Premier League defeats.

Things did not look good for the Hammers after Boro’s Uruguayan striker, Cristhian Stuani had headed the visitors into the lead early in the second half.

It was another moment of genius from Dimitri to level the game for the Irons but they had to settle for a draw as they now head into the international break.

Bilic revealed that the players had been working even harder in training during the week as they looked to turn their season around.

But he was forced to change his team around after just four minutes following another injury setback as Sam Byram was stretchered off with what looked like a hamstring injury and was replaced by Alvaro Arbeloa.

Boro could have broken the deadlock on 12 minutes when Viktor Fischer made space inside the box and fired a shot inches past the post.

The home side also came close to opening the scoring on 18 minutes when Payet saw an opening then weaved his way into the penalty area and saw his low shot superbly blocked by Calum Chambers.

Payet was involved in the heart of the game again 2 minutes later as he cut in from the left hand side and curled his shot just inches wide of the goal.

The Hammers had another golden opportunity to open the scoring on 39 minutes when they caught Middlesbrough on the counter attack as Antonio raced towards goal before picking out Mark Noble who drilled a low shot from the edge of the box and his effort flew just wide of the goal.

The woodwork then denied the Hammers skipper on the stroke of half-time as he found himself unmarked inside the box and saw his curling shot beat Victor Valdes but crash against the bar.

The home faithful were then silenced 7 minutes after the break when Middesbrough took the lead through Stuani as he rose above Michail Antonio to power a header past Adrian from Viktor Fischer’s corner.

Noble attempted in vain to clear his header, but replays showed the ball had clearly crossed the line.

Then came that moment of brilliance from Dimiti Payet, as he picked up the ball on the left hand side and then produced an incredible piece of skill as he raced past four defenders before striking the ball into the corner of the net.

The goal ignited the home fans and they were now desperate to see the Hammers clinch a winner but unfortunately it did not ignite the rest of the players to rise to the challenge and gain the much needed 3 points.

Payet was involved once again on 64 minutes when the home side were awarded a free-kick on the edge of the box but the French winger saw his set-piece effort the wall. The rebound fell to Arbeloa who struck his shot inches past the post.

Despite introducing Manuel Lanzini into the action, West Ham couldn’t find the crucial second goal and had to settle for a point as Simone Zaza and Antonio both missed chances near the end of the game .

Bilic will be hoping the point will be a building block for the club as they now prepare for the next Premier League game against Crystal Palace in two weeks time. He will also be hoping that the likes of Diafra Sakho, Aaron Cresswell and Andy Carroll will be at his disposal for that game given the glaring issues up front and in the fullback positions.