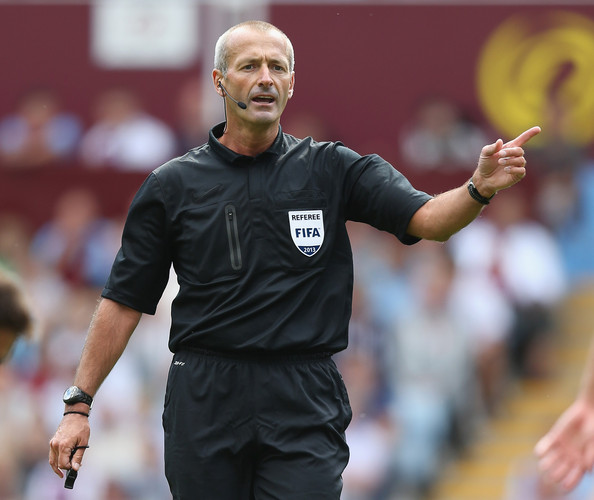 Brian Knox
2 comments
Written by Sam Roydell-Ryell
After 7 games, we’re sitting uncomfortably at the foot of the league and the international break was a welcomed break for Slaven Bilic and the team to work on the basic area in defence and attack, which has been lacking in the first 7 games. Aaron Cresswell starts for the first time this season, after getting injured in pre-season. It’s a welcomed return and I hope he will give some stability to the defence. James Tomkins plays against West Ham for the first time since his transfer in July to seek first team football. Tonks was a solid player for West Ham and I wish him all the best. The referee appointed for this London derby is Martin Atkinson. Atkinson was the man in the middle in our 4-2 defeat at home to Watford in September.
Martin Atkinson had a relatively quiet half right up until the 45th minute when he had to make two big decisions within seconds of each other. The first decision Atkinson had to make was to determine whether Michali Antonio fouled Andros Townsend on the edge of the area. Atkinson was very quick to signal this wasn’t a foul by it waving away. Whilst Atkinson was waving away the appeals, the ball ricocheted into the path of Angelo Obgonna and he attempted to clear the ball but Christian Benteke was quick and Ogbonna caught the Belgium on his right foot. This was incredibly clumsy by Ogbonna but Atkinson was spot on to award the penalty. Atkinson made two very good decisions, which other referees could of easily got wrong. There were a couple of fouls against Benteke in the first half. Kouyate was in the wars with the Belgium international and I expected further tussles with the two players in the second half. The only player cautioned in the first half was West Ham’s captain Mark Noble for a poor challenge on Townsend. The challenge was reckless, unnecessary and did warrant a yellow card in my opinion.
What can I say about Martin Atkinson on his second half performance after I praised him very highly in the first half; it really was a tale of two halves. The two decisions in the first half were brilliant, however the two decisions against Aaron Cresswell in the second half were very disappointing. West Ham and Cresswell will feel very hard done by for the two decisions Atkinson made within two minutes of each other. The first decision Atkinson had to make was whether contact was made by Yohan Cabaye on Cresswell inside the penalty area. Atkinson blew for a foul against Cresswell and was issued a caution for simulation. Cresswell’s second yellow card was for bringing down Wilfried Zaha on the right hand touchline. The assistant referee was the official to award this foul against Cresswell and mouthed to Atkinson ‘off’.
I have so many issues with both of these decisions and it could have cost West Ham well deserved 3 points. Firstly, Atkinson was in the perfect position to see that Cabaye took Cresswell’s right foot away from him. I cannot defend Atkinson in this situation and his decision should have been straightforward awarding a penalty to West Ham. If Atkinson made the correct decision, Cresswell wouldn’t have received the unfair yellow card. Secondly, the decision the linesman made on Cresswell’s challenge on Zaha was very, very harsh with minimal contact made by Cresswell. The linesman made the call, which was a huge decision to make in such a critical period of the game and Atkinson chose to listen by issuing a yellow card on the information he received. If Cresswell wasn’t on a yellow card, I think Atkinson would still have issued a yellow card, which I still feel would have been harsh. Regardless of this, in my opinion Cresswell should have still been on the pitch and Atkinson did make two huge errors. Cresswell will be suspended for one game for two bookable offences and West Ham are unable to appeal the decision. What I did find interesting was that Martin Atkinson waved away a very similar coming together earlier in the second half with Cresswell and Zaha. This was inside the penalty area with once again minimal contact made by Cresswell; the inconsistency is an issue for me.
Martin Atkinson had a very good first half but for me, a very disappointing second half. In my opinion, I feel that Atkinson guessed the two decisions, especially the penalty. Cresswell shouldn’t have issued a yellow card for ‘simulation’ as there was blatant contact by Cabaye and contact by Cresswell on Zaha was very soft.
On a positive note, it’s great to see us play so well again with glimpses of last season, particularly in the first half. Billic changed his formation and it worked a treat but I feel this formation suits us more when Cresswell is in the team. He was very impressive as a wingback and made some great attacking positions. For me, there were so many standout performances alongside Cresswell with Ogbonna, Reid and Kouyate also solid in defence. You also have to give Zaza a lot of credit. He was non-stop throughout, chasing down every ball and putting pressure on the Palace defence. He does need to take his opportunities and have a shot on goal, but his goal will come and hopefully he can push on. Next week we welcome a Sunderland team rooted to the bottom of the league and I hope we can push on and get on a winning streak.
Ref Watch
share