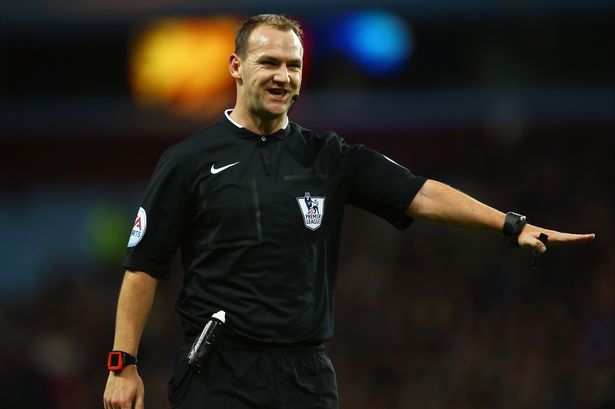 After an overdue win away at Crystal Palace last weekend, we welcomed a Sunderland team who are rooted to the bottom of the league and not showing any glimpses of improving. It was great to see Aaron Cresswell back from injury against Palace and what a difference he made to the team. It was very unfortunate and frustrating that Atkinson clearly missed contact by Cabaye on Cresswell inside the penalty area and Zaha going down too easily under minimal contact from Cresswell, resulting in two yellow cards. The decision cannot be overturned and we move on – the referee appointed for this game week 9 fixture was Robert Madley.

In a half, where West Ham didn’t take advantage of their early dominance, Madley’s performance was good and I felt he handed the game well. The first caution of the game went to Sunderland’s Jack Rodwell after the former England international caught Manuel Lanzini with a high boot. This came after Madley played a really good advantage, which initially resulted in a West Ham corner. Fernandes shot seemed to ricochet off a Sunderland defender and Madley signed for a corner. After some protest by the Sunderland players, Madley consulted his assistant over the radio and reserved his decision and awarded a goal kick. Madley correctly held his hands up for his error, however as his assistant knew the correct decision, he should have corrected Madley a lot sooner. Ibrahim Ndong was the second name to go into Madley’s notebook after a very late and poor challenge on Dimitri Payet. Madley was quick to issue a deserved yellow card and a free-kick to West Ham.

Sunderland caught West Ham napping and went on a promising attack with West Ham defenders out of position. Edimilson Fernandes was brought in to replace the suspended Cresswell in the left wingback position and brought Sunderland’s Manquillo down just outside the penalty area. Madley was correct to issue Fernandes the first West Ham caution of the game. Steven Pinnaar was the final player to be cautioned in the first half after a foul, however it was more for the dissent towards the referee.

In a second half that was nerve-wracking for West Ham fans, Madley continued his good performance from the first half. After four cautions in the first half, Winston Reid was the second West Ham player in Madley’s notebook after Reid caught Duncan Watmore in a promising Sunderland attack. Madley had no choice but to caution Reid for this intent to foul the Sunderland midfielder. Slaven Bilic is a very animated character at the best of times, but after Madley gave a foul against Jonathan Calleri, Madley had to speak to the West Ham manager and issue a warning for his touchline antics. Bilic was quick to accept Madley’s request. There were a couple of cautions which added to Sunderland’s tally in the final stages of the game, one went to Billy Jones for preventing a restart for a West Ham freekick and the other to Khazri for throwing the ball away after he felt he was fouled.

I can’t remember the last time West Ham deserved to win a game and scored in final seconds of additional time. It was a brilliant strike by Winston Reid but I was interested to see whether Madley or his assistant thought that Ashley Fletcher made an obvious intent to play the ball on Reid’s incoming shot in an offside position. Firstly, no West Ham players were offside including Ashley Fletcher, when the ball came through a very crowded penalty area. Secondly, the law states that a player must “clearly attempt to play a ball, which is close to him when this action impacts on an opponent” to be penalised and Fletcher did make movement in front of the goalkeeper however, my opinion is that Fletcher was moving out of the way of the incoming shot and Fletcher was originally in an onside position – so the referee couldn’t have penalised him.

In my opinion, I thought that Madley had a good game and felt his decision making was particularly good – playing advantage where he could and correctly issuing cautions to the players in question. A note on West Ham; I was feeling very frustrated after 93 minutes but Winston Reid’s left foot strike changed everything. We’re still not the finished article, we really need to figure out the striker situation with all of our goals this season coming from other positions. Next week, we visit Goodison Park against an Everton team who have started very well this season.