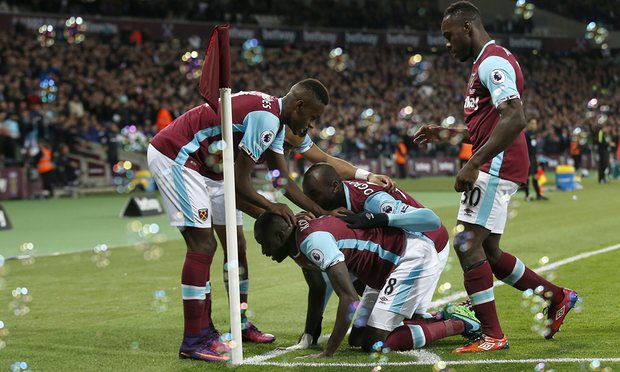 West Ham defeated Chelsea in the fourth round of the League Cup tonight at the London Stadium.  Hammer’s supporters had to groan when the draw was released and West Ham saw their perennially successful London rivals instead of a less formidable Championship opponent;  But Slaven Bilic’s side has found some form lately, and a number of injured starters have returned to action.  With Bilic’s commitment to field a strong side, West Ham at least made the effort to entertain the home crowd.

Bilic’s two changes from the weekend win over Sunderland were Darren Randolph in goal, and Aaron Cresswell for Simone Zaza.  Both teams started with a 3-4-3 with West Ham featuring Michail Antonio furthest forward.  Chelsea went with Michy Batshuayi at forward. Antonio Conte’s club came in with high spirits after dismantling their former manager in a 4-0 victory over Manchester United on Sunday.

Once under way, Darren Randolph was tested early when N’Golo Kante fired into the keeper, who’s parried save was cleared by Pedro Obiang.  Moments later the Hammers showed their own attacking class when a Dimitri Payet corner was cleared to Manuel  Lanzini, who found Mark Noble.  It was Noble’s cross that Cheikou Kouate headed past Asmir Begovic to give the hosts the 1-0 lead in the 11th minute.

Feeling confident, the Hammers continued to attack Begovic.  Both Antonio and Fernades had moments in the following moments, but Nathaniel Chalobah almost took the Blues level from distance, as Randolph tipped clear.

Neither goalkeeper had an easy first half, as both saw a good bit of action.  In the 43rd, Pedro Obiang had great strike from 30 yards out , that Begovic was able to dive and save.

In the final minute of added time in the opening half, it was Oscar who had a near-miss as his shot was deflected by Winston Reid and rolled inches wide of goal.  A breathless half of play then came to an end.

Once the second half got underway, it was Edmilson Fernandes who brought the home fans to their feet with a 48th minute goal to bring the match to 2-0.   Looking for a spark, Conte subbed in Diego Costa and   Edin Hazard early in the half.   The changes looked to bring about success for the Chelsea, as Costa was able to break into West Ham territory and find Willian, who shot wide from short-distance.

The Hammer’s faithful were happy to see in the 78th minute Andre Ayew made his first appearance in months since his summertime injury. He came in for Lanzini and gave a Bilic a strong shift.  Ayew had a chance in the 83rd when he took a cross from Payet and headed wide.

Late in the match each team had their chances.  During the four minutes of added time Simone Zaza found Payet for a great shot but Begovic tipped it clear.  The final minute of added time, the Chelsea supporters at least found something to cheer for, as Gary Cahill took a short pass and found a late goal, but it was too late in the stoppage period to allow Chelsea to equalise.

The final whistle sent West Ham into the quarterfinals and gave some suffering East London fans another needed victory at the home grounds.  The take-away from this match was Bilic’s continuing to experiment with non-traditional formations and positions.    The “3-4-3 with Antonio up top” looked better than the “Antonio at right back” experiment.    And once again everyone was reminded what an important role Cresswell plays for this team.  His return possibly has reversed West Ham’s fortunes possibly more than any other injured team member.

With a short week, West Ham now heads to Goodison Park for a Sunday visit with Everton.  Ronald Koeman’s side are coming off a disappointing loss to Burnley.  While they hope to move up the table, Dimitri Payet hopes to avenge a savage challenge he sustained last season, which caused him two months of recovery.   But after a rough summer of injuries, transfers, and growing pains in a new stadium, at least West Ham are showing they can dominate and win even against the top half of the league.