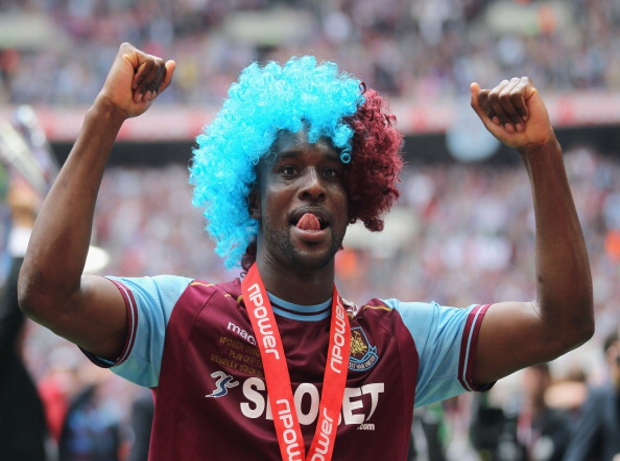 Carlton Cole is back training with West Ham after leaving US third tier side Sacramento Republic. The former Hammers forward made just four appearances for the Republic and failed to score before leaving last month.  Slaven Bilic has given Cole permission to use the facilities at West Ham’s training ground and the former Celtic striker is delighted to be back with the Irons. dailymail.co.uk

Blame Seb Coe and Boris Johnson, not West Ham, for the scandalous waste of their £752m stadium.

“By the time it came to adapting the stadium for the only sport which could consistently fill it, West Ham were the only show in town. And since everyone who has sold a house knows what a lack of willing buyers does to the price, Karren Brady & Co can hardly be blamed for driving as good a deal for their shareholders as they could.” independent.co.uk

Who should be taking the flak for how expensive the stadium has become? Is it West Hams fault

West Ham United’s band of internationals have a busy period ahead in the final break from domestic football of 2016.whufc.com

Who should start up front for West Ham against Stoke City this weekend?

It’s a damning stat – no West Ham striker has scored a goal this season. Simone Zaza, Jonathan Calleri, Ashley Fletcher, Andre Ayew and Andy Carroll haven’t found the net. Admittedly, those last two have been injured but they are still frontmen on the books of the Hammers. essexlive.news

Who would your choice be up front? Antonio again? Give Zaza another chance? Ayews turn to stake a claim? Or should Fletcher be given a chance?

£17 million must be paid if he makes one more appearance for the club?

It’s still too early to label him as a flop but the signals aren’t encouraging for West Ham United striker Simone Zaza. The 25-year-old has struggled to adapt to life in the Premier League under coach Slaven Bilic which could see him leave the Hammers in January. After failing to score in his opening nine appearances for the East London club, the agreement in place between them and Juventus is that a fee of £17 million must be paid if he makes one more appearance for the club. calciomercato.com

Just one more game? Let’s hope not, because it wouldn’t be good for West Ham or the player.

Noble pleased to be back at London Stadium.

West Ham United captain Mark Noble is looking forward to playing at London Stadium once again and hopes the fans will generate another special atmosphere against Stoke. Noble believes the team produced one of their best performances of the season in the last home game to record a memorable win over Chelsea in the EFL Cup. whufc.com

The cup game against Chelsea was a good atmosphere, butcan we recreate that against a team that we have no rivalry with or during an afternoon game?

The Academy of Football’s loan stars returned to Chadwell Heath last week as they took a break from their busy schedules to catch up with fellow players and staff. In total, seven players made the trips back from their respective loan clubs to East London, including Josh Cullen, Reece Burke and Martin Samuelsen. Academy Director TerryWestley was keen to stress the importance of the day and said he hoped the players would take a huge amount for the experience. “The purpose of this day is to get everyone back together and remind them that they’re West Ham players,” he said. “Sometimes, these days remind us of the quality we have at the Club who are out on loan. whufc.com

Is it a good idea to keep in touch with our loan players? Are there any of those players who returned that you think should be in  the first team squad now? Samuelson, Page, Burke?

“For me the problem is a simple one, until we get a proper police presence in the ground to deter the trouble it is going to continue. I know people who didn’t go to the Chelsea game because they were scared. People have got to feel safe in the ground and that means we need the police there now, not in three months time – now. Some people have jumped on the bandwagon and said we should play behind closed doors, but that’s a ridiculous over-reaction that will punish the innocents.”

“Until this is sorted we are going to have hooligans from every club who come here thinking they can have a  tear-up. This is 2016 not the 1970s and it is time to sort things out.” newhamrecorder.co.uk