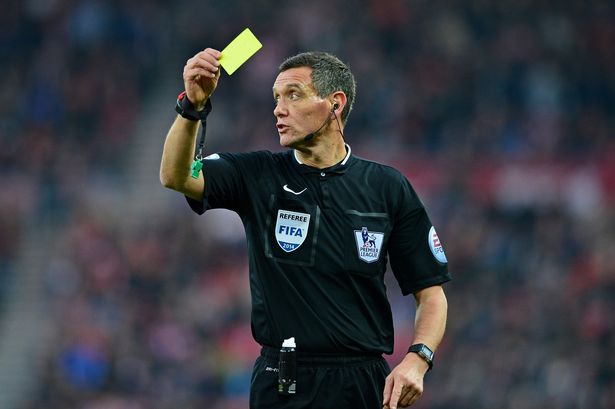 After a disappointing result against Everton last weekend with Lukaku haunting us once again, we welcome a Stoke City team who are unbeaten in 5 games. West Ham are only 3 points above the relegation zone but have won the last 3 games at the London Stadium. The referee appointed for this fixture was Andre Marriner, who controversially failed to see Sergio Aguero’s blatant elbow on Winston Reid at the Etihad earlier in the season. The FA subsequently banned Aguero for three games after a review by the independent commission panel.

From a footballing perspective, I cannot remember a 45 minutes of football this season where I was seriously thinking of switching the game off. In a half where more Stoke players went down injured than shots on target, Andre Marriner was merely a spectator issuing only one yellow card and missing a handful of fouls. There were a lot of petty fouls throughout and none more than an obvious trip on Dimitri Payet that again wasn’t seen by Marriner. The only caution of the first half came within the first 12 minutes when West Ham lost the ball, which was the story of West Ham’s first half. Antonio brought down Martin Pieters on the half way line to stop a promising attack and Marriner had no choice but to caution the West Ham midfider.

The second half was better than the first half, however it couldn’t get much worse. Andre Marriner was busier in the second half with three yellow cards issued to West Ham and an overdue caution for a Stoke midfielder. The second half started as the first half finished: slow, boring and painstaking. Phil Bardsley doesn’t shy away from a challenge nor from dissent. The Stoke defender was fuming with a decision the assistant referee made which went against him and Bardsley gave a foul mouthed response in return. Marriner should have cautioned Bardsley for dissent which shows inconsistencies to other referees throughout the league. A flurry of West Ham players found their name in Marriner’s book in the second half and the first being Edimilson Fernandes. Fernandes got beaten by Ramadan on the inside and Fernandes had to bring the Stoke midfielder down to stop a promising attack. I respect Adrian and think he’s a fantastic goalkeeper, but he’s prone to a big error once in a while and this calamity goalkeeping error gave Stoke their equalising goal. Before this particular incident, Adrian was flapping throughout the game at Stoke corners and after the introduction of Peter Crouch, Adrian’s panic levels increased. Jon Walters found himself in the West Ham penalty area and steading himself to get a cross into the box. Adrian ran 12 yards to try to block Walters cross, even though there were enough West Ham defenders to cover. Adrian took Walters out and Bojan was there, unmarked, to head into an open goal. If Bojan didn’t score the gift of a header, I believe Marriner would have signalled for a penalty. Adrian was subsequently cautioned for jumping into Walters. Mark Noble, who hasn’t been on the kind of form as last season, is going to miss the London derby against Spurs after the international break for unnecessarily getting his 5th caution of the season, for a challenge he didn’t need to make.

There was a shout for a penalty from the West Ham fans including Antonio after it appeared Pieters pulled Antonio down whist trying to get on the end of a hopeful long ball 6 yards from goal. There was contact by Pieters, but Antonio was nowhere near the ball to make a genuine attempt. if Antonio was in a position to genuinely scoring and Pieter’s was clearly denying an obvious goalscoring opportunity, there would have been a strong case. Joe Allen was booked in the final second of the game after clattering Michail Antonio. I felt that Allen should have been cautioned earlier in the second half after catching Aaron Cresswell. Marriner missed this challenge and only gave West Ham a throw-in.

I felt Andre Marriner could have done better in this fixture and he did miss some obvious fouls throughout the game. There was a scenario in the second half where Marriner played advantage after a West Ham player was fouled, however the ball was instantly won back by Stoke and was hoofed up the field. Marriner should have blown for the previous foul as there was no advantage played by West Ham.

It’s clear that there are still a lot of issues that need to be resolved at West Ham and we are nowhere near to seeing the type of performance that entertained West Ham fans last season. It’s concerning that none of our strikers have scored this season and that the Zaza situation is becoming more complex. The international break has come at a good time and Bilic needs to sort out the team before the London derby away to Spurs. Regardless of the form we’re in, nothing less than 3 points is expected against Spurs.