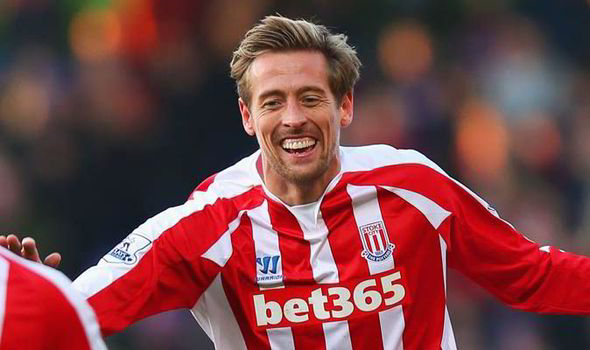 So I am writing one of these again off the back of a disappointing performance. We have a real issue with our forwards having not scored or assisted in any game this season. It is easy to pinpoint the blame at their feet but I do not believe they are getting the service that they need to be influential. The rest of the attacking players are a good 10 yards away from the forward when they initially received the ball.   Payet puts great balls into the box but again we do not have that physical target man forward to get on to the end of them.

The majority of people seem to have agreed with me regarding dropping Adrian for Randolph although there are some who think I am being too harsh. I love Adrian do not get me wrong and I hope he signs a new deal however the fault against Stoke cost us the game and a similar error against Watford let them back into the game and there have been others. Not many people noticed but Crouch had gone in studs first into Adrian’s knee just before he ran out and did a similar move on their player (which lead to their goal). Whether this was intentional or not I am not sure but if it was, it makes the decision to run that far out when there was clearly a number of defenders around, even more inexcusable.

Randolph has not let the side down in any game that he has been called upon. He also has a harder job because he has to come in and play one game every now and again without building up a run of games which is so important to goalkeepers. So the fact that he plays that well with the odd game here and there I would love to see what he could do with a run in the side. The whole point of having two good keepers is that if one is off form the other can come in, if Randolph does not come in, it shows to me that Adrian is pretty immune as the number one here and that is not a good message to send out.

We will be looking to bring in a right back in January because of ongoing fitness concerns of Byram and Arbeloa. It is true that Ivanovic is someone that we have considered and there is a couple of potential deals with Chelsea that we would like to conclude as well as this.   We will also look to sign another forward.   This of course depends on the Zaza deal. It is fair to say that the club will not be signing Zaza and so I do not expect him to complete the 15 starts he needs to which will trigger the deal to West Ham. So there will be money to spend.

I think the club has finally lost patience with Andy Carroll and would look to sell him in January if an offer did come in for him from China.   Whether this has any truth I am not sure at this stage but certainly the ongoing injuries mainly have frustrated the management because you cannot plan anything around him playing. Unfortunately there are a number of players at the club that have ongoing injury problems that will always flair up and I am not just talking about Carroll and Sakho here.

Payet has on French television suggesting he would be open for a move in January. Whilst the club have no ambition to sell the player, if we end up in a relegation battle come January you could understand him considering his options.   I hope that he doesn’t leave but no one is bigger than the club and if he wants to go we would have to let him in my eyes, as much as I would hate that.

We have been looking at some targets now and beginning to build up some potential players that we could move for in January although there is nothing solid in place at this point.   As always our scouts are working all over the place and checking out players from a number of leagues particularly the French ones.

There are a number of things for us to talk about on the radio show the week, which you can download as podcasts now. I will speak more about some of the players that we are looking at on the show then.