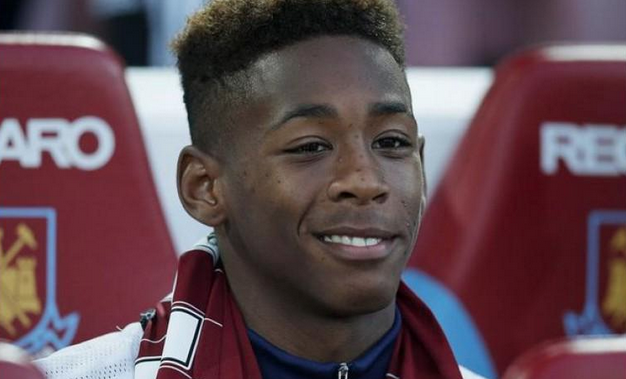 Payet wins Goal of the Month.

Dimitri Payet has won the vote for October’s West Ham United Goal of the Month. Payet’s remarkable slaloming effort against Middlesbrough took your vote as our best strike in an October month which saw a collection of fine Hammers’ goals. whufc.com

Sadly no West Ham strikers had any goals to enter into the competition!

West Ham are hopeful Diafra Sakho will be fit to feature in the Premier League clash against Tottenham following the conclusion of the international break. Sakho is yet to make an appearance this season, having struggled to shake off a back injury in recent months. The 26-year-old returned to first-team training two weeks ago and is now closing in on full fitness with next Saturday’s trip to White Hart Lane being pencilled in as a potential return date. standard.co.uk

Sakho is close to being fit! Again…. Do you think we will ever see Sakho in the first team again?

RB Leipzig sporting director Ralf Rangnick has ruled out a move for West Ham defender Reece Oxford. Rangnick, who is entrusted with finding new signings, has cooled talk of a move for the Hammers starlet. “We will not move for him neither this winter nor next summer,” Rangnick told Bild. “He once played a role, but the emphasis is on those who can play immediately.” talksport.com

Will Reece get a chance in the first team when he returns from injury? Who else might come in for him in the future?

The West Ham keeper, preparing for the Republic of Ireland’s World Cup qualifier in Austria on Saturday, and the rest of the squad remained at the training ground after it emerged the England striker had apparently been held up on his way home. Asked if Carroll’s experience had proved frightening, Randolph said: “Yes, considering he left first and a lot of us had to go the same way to get back home. Everyone stuck around for a little bit longer just in case. “It was obviously not nice for him and not nice to hear about anybody. When it strikes a bit closer to home, it is a little bit scary. It does play on your mind for a few days. You just hope you’re not the unlucky one it happens to.” express.co.uk

West Ham United and Brighton & Hove Albion are battling it out for highly-rated teenager Bilal Mohammed, HITC Sport understands from sources close to the club. Mohammed has been earning rave reviews for Hammarby’s youth sides and he is regarded as one of the best young prospects to emerge from Scandinavia in recent years. The 15-year-old enjoyed a trial spell at West Ham last month after being invited over to train with the Premier League club and Mohammed is understood to have impressed during his stint in East London. hitc.com

The 21-year-old has been heavily linked with a switch to the Sky Bet EFL Championship side, after being released by the Hammers in August. Rumours had suggested Poyet, son of former Chelsea and Spurs player Gus, was training with the Rams ahead of a move to the East Midlands club. However, Poyet tweeted on Wednesday: “Derby are a great football club but despite reports on here I would like to confirm I’m not currently training with the team.” essexlive.news

From the Treatment Room.

Ginge suffered a calf injury in the Stoke game and had to withdraw from the Wales squad. He will rehab with us this week and we hope he will be available for the trip to Tottenham Hotspur on 19 November. Winston was injured towards the end of the Everton game. He is working on his rehab at Rush Green, having had to withdraw from the New Zealand squad. Diafra Sakho has been training with the first-team squad for the past two weeks and we hope he will be available for selection against Tottenham or the week after. Andy Carroll is progressing well with his rehab, Gokhan Tore is closer to returning to train with the squad, while Sam Byram is working very well following his hamstring injury and has started running on the pitch this week with our head physiotherapist Dom Rogan. Reece Oxford suffered a high ankle sprain in training before the Everton game and is currently using crutches as he is in the non-weight bearing phase of his rehab. whufc.com

Mixed news here for our next match: Ginge ‘hopeful’ for Spurs game, Winston not stated as being back for the Spurs game, Sakho ‘hopeful for next game’, Carroll ???, Tore ‘closer’? And let’s see what happens after the internationals are over…… What the chance of us having more players returning injured?

I am thrilled with the news that Aaron Cresswell has been called into the England squad for the next two games against Scotland and Spain. It is just rewards for the hard work that Aaron has put in on a consistent basis since we brought him to the Club back in 2014. Aaron showed his quality straight away and became a fans favourite in just his first season at the Club when he won the Hammer of the Year award. whufc.com