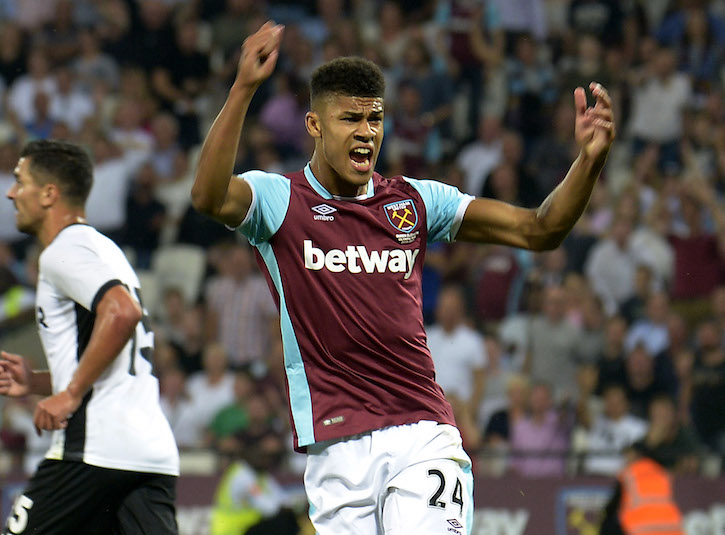 Ashley Fletcher is hoping to get more opportunities to impress in the coming weeks and is keen to open his account for West Ham. Fletcher said: “I didn’t expect to be this involved but every opportunity I get, I try and make an impact on the pitch. I am hungry to do more, to help this team and I am hungry to score more goals. Hopefully I will get more opportunities.” Fletcher is well aware of the importance surrounding the game at White Hart Lane next Saturday and knows what it will mean to the fans if the Hammers can celebrate another memorable win in north London. “This is a game where we want to come away with the three points. We will be doing everything we can to win and hopefully it will propel us up the league.” whufc.com

Do you think Fletcher has been involved enough? Do you think he should start more games for us now? Where do you place him in the ‘pecking order’ of the current strikers we have?

Collins gives his verdict on going to White Hart Lane.

See where they are now by looking at this link: essexlive.news

Our team has almost totally changed in that time; possibly only Reid will play in next Saturdays match if he recovers from injury. Mark Noble is suspended. Who was your favourite player from that team? I think I would have to go with Vaz Te…

West Ham insist unsettled Dimitri Payet will not be leaving in January .

West Ham will take a tough stance over Dimitri Payet in January after his apparent come-and-get-me plea to Paris Saint-Germain. Insiders have told Sportsmail that they will not allow themselves to be pushovers when it comes to Payet, who has no release clause in his contract. As far as the London club are concerned, the France star is not for sale and has a contract that runs until 2021 to honour. They told the 29-year-old that they would be willing to up his pay to £150,000 per week if he continued to perform until Christmas. dailymail.co.uk

Good news that Payet has no release clause and is ‘not for sale’. Every player has their price though, what would Dimitri’s be? And would you sell if the price was right?

West Ham battle for international striker who is set to move in January.

West Ham face competition if they want to land Napoli striker Manolo Gabbiadini. Napoli want Gabbiadini to sign a new contract but talks have stalled and he is set to leave when the transfer window opens in January. Gabbiadini has scored 14 Serie A goals in 17 league starts since joining Napoli in January 2015. express.co.uk

14 goals in 17 games sounds good! Do you think Gabbiadini would be good for us? Could he transfer that form over to the premier league?

Simone Zaza is flattered by interest from “great team” Napoli, but feels leaving West Ham so early would be “a personal failure.” The forward is technically still on loan from Juventus, but another five competitive appearances and the Hammers will have to buy him outright. “Napoli are a great team and I have already been fortunate enough to play for Juventus, so I am proud of that, but I am focused on breaking my duck and playing well,” he told Rai Sport. “West Ham are my current club and it would be a personal failure if I was to leave now.” football-italia.net

Can Zaza leave now? Would it be a ‘personal failure’? Will he start up front for us against Tottenham?

West Ham former chairman Eggert Magnusson calls for London Stadium to be rebuilt after problems settling in to new home.

Former West Ham supremo Eggert Magnusson says the London Stadium must be torn down and rebuilt. The Icelander drew up plans for the venue to become the Hammers’ home back in 2006. But they were rejected because London 2012 chief Lord Coe wanted an athletics legacy following the Olympics. Magnusson said: “You cannot build an Olympic stadium and THEN make it a football stadium. You BEGIN with football in mind. We had plans and costings for a stadium with retractable seats, like the Stade de France.” “Upton Park had a special atmosphere and you want fans to hear tackles and what the managers are saying. What we have now is a mess! Money has been thrown down the toilet and the original plans could have saved hundreds of millions.”

“The stadium is simply unfit for football. It’s a coliseum for athletics — you have people 40 metres from the pitch, moving to concourses so they can see. I really feel sorry for the fans. I don’t think anything can be done now. It’s better for it to be torn down and started from scratch.” thesun.co.uk

It is said that hindsight is a wonderful thing. But could a stadium have been developed that was fit for both sports? Should everything have been planned better from the start?

Arrest made after attempted robbery on West Ham footballer.

A man has been arrested in connection with an attempted robbery on West Ham player Andy Carroll. The striker was driving home through Romford Road, Chigwell, on November 2 when two men tried to block his car with motorcycles. They indicated they had a gun, but Carroll was able to drive off and reported the incident to the police. A man was arrested in Dagenham on suspicion of attempted robbery, grievous bodily harm and handling stolen goods. He is also being held in relation to aggravated burglaries in Essex, Hertfordshire and Suffolk. guardian-series.co.uk