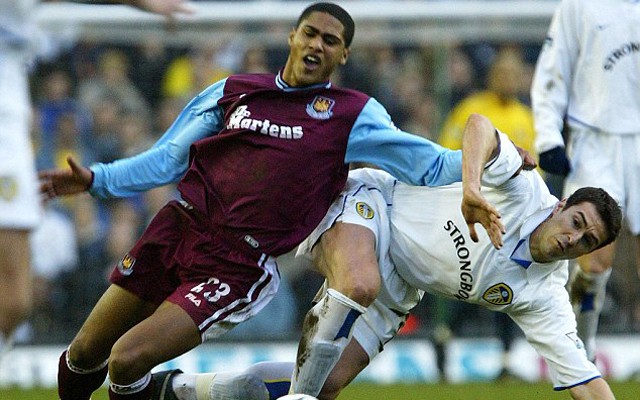 What a frustrating result that was against Spurs. It was the first time this season I had felt comfortable with the team selection and the formation and it was nice to have a recognised forward starting and someone who we know can score in the Premier League.

I thought we played well and in particular Winston Reid and Cheik Kouyate were superb. I thought Lanzini was industrious in midfield and that Spurs were afraid of Payet. This is why he shouldn’t have been taken off and why I believe the subs costs us.

Payet was our main outlet and the player Spurs were most fearful of and it meant they didn’t push on with as much freedom as they did once he left. He should have stayed on the field in my eyes.   I agreed Sakho should have gone off because he was looking tired but I would have put on Fletcher who has proven he is a good person to put on to hold the ball up and use pace to worry the opposition. I would have also brought on Collins instead of Nordveit, who has looked off the pace all season and push Kouyate into defensive midfield. I know hindsight is a wonderful thing but it was very disappointing especially as all three goals that Spurs scored had individual mistakes by us in them.

Another frustrating thing to come out of the Spurs game was the lack of coverage some of the Spurs fans got in comparison with the ludicrous headlines that greeted us after matches at the Olympic stadium. I have heard from many of you who attended the match saying how Tottenham fans were steaming in and taking out random West Ham fans, as well as coin throwing. Had this been the other way round at the London Stadium you know this would have been covered all over the press.

The board, whilst backing Bilic 100% at this point are becoming quite worried/frustrated with recent results and performances.   Whilst I think Bilic is safe for the short term, should these results continue and our Premier League survival be in doubt then I think the club would act unlike what happened under Avram Grant. Although this is all speculation at the moment I know the club really like Mancini and that he would be keen to move here. Benitez was obviously a big target before we got Bilic but would he be persuaded to leave high flying Newcastle for us? Likewise we like Eddie Howe but I am not sure whether he could be persuaded either. There are also some foreign alternatives and some in the championship (although these are unlikely) including former targets Bielsa and De Boer but like I said Bilic for the time being is safe.

The board have a real dilemma on whether they will back Bilic in the January window or a new man. Sturridge is someone that the club would love to get on loan for the season with the potential for a permanent deal in the summer. There are some concerns regarding his injury record so a loan deal could be the way round this. It was thought that we may try and persuade Giroud to join us as well but his recent form for Arsenal could prevent them from selling him as well as a lot of competition from other clubs. A forward is the key as it really should be and a number of players are being scouted at the moment. Dembele of Celtic and Lookman of Charlton are players that have been watched, which Hammers Chat reported in the week, and Mandžukić of Juventus too who could come in to save his fellow Croatian. Lukasz Teodorczyk is a Polish forward on loan at Anderlecht, we could try to buy out his loan and take him permanently to the club. There is a few other players from the German and French leagues have been scouted too. Many supporters are calling for Jermain Defoe to return, should he be available for a move I think we would do it as we have made two previous approaches under the current board of directors.

We will also move for a right back. Iorfa of Wolves is someone we are keen on, plus the potential of loaning Jenkinson for the season hasn’t left our minds. Without doubt the right back situation will be addressed, Jon Flanagan the Liverpool right back, who has recently returned from a loan from Burnley may be an option too. Glen Johnson’s name has been discussed as well for some Premier League experience and someone who can also play right back and wing back.

As I mentioned in my last column we have looked at Chelsea and Liverpool players as is mentioned above but this also includes Dominic Solanke whose contract is due to expire in the summer.  We are also expected to allow Tore, Calleri and Zaza to have their loan deals terminated to free up wages and squad space.

It is great news that Quina has signed a new contract with the club and Oxford is set to sign very shortly. Reece turns 18 on the 16th December and so the club will be able to tie him to a long term deal from that point which he now seems keen to do. It is expected that a number of other promising youngsters will also sign new deals soon. 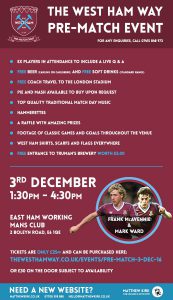 Our West Ham Way Event is really selling well and we are delighted to have Frank McAvennie and Mark Ward answering questions in a specially designed “West Ham” venue. There will also be a number of other famous West Ham fans in attendance and we would love to see more of you there. If you are still unsure free coach travel to the London Stadium and free beer should persuade you. Even if you don’t have a match ticket the game will be shown at the venue. You can buy tickets here: https://www.tickettailor.com/all-tickets/22834/293a/