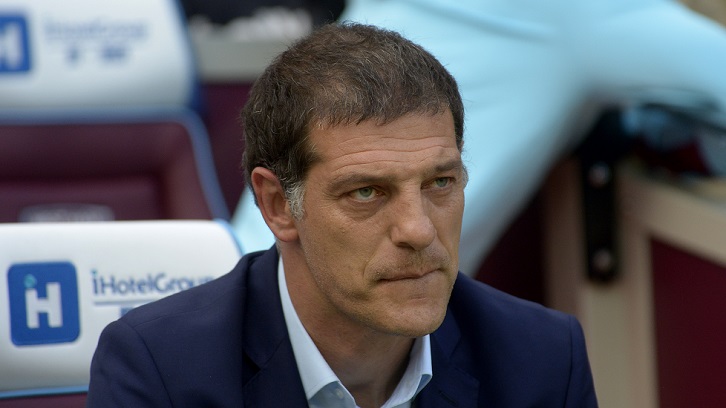 Telegraph Sport understands West Ham chiefs have started to consider their options should they feel forced to make a change with Eddie Howe, Roberto Mancini, Rudi Garcia and Rafa Benitez all admired within the club. Co-owners David Sullivan and David Gold, plus vice-chair Karren Brady, now fear West Ham could go into the busy Christmas period in the bottom three which would leave them a difficult decision to make on Bilic.

Sullivan and Gold do not like sacking managers, and have been keen to give Bilic time to turn around the team’s bad start to the season, but they cannot risk relegation just a year after their controversial move into the London Stadium. telegraph.co.uk

What will happen with our manager? If we go out of the cup and lose our next 2 or 3 games will it be time up for Bilic?

Slaven Bilic not facing the sack at West Ham despite poor start to the season for Hammers. West Ham have no intention of replacing under-pressure boss Slaven Bilic, despite the club being just outside the bottom three. Reports suggesting that Eddie Howe and Rafa Benitez are being lined up to take over at the London Stadium are wide of the mark. But despite the fact that the Hammers could go into the Christmas period in the relegation zone, co-owners David Sullivan and David Gold and vice-chair Karren Brady are firmly behind Bilic.

Said a club insider: “Results have been disappointing and some of Slaven’s summer signings have yet to catch fire, but the board are confident the situation can be turned around and that things will improve soon.” thesun.co.uk

Will our owners stick with Bilic no matter what the results before Christmas? What do you think?

John Hartson shares how he would feel if Slaven Bilic was sacked by West Ham United.

John Hartson has told the Alan Brazil Sports Breakfast Show, which was broadcast on TalkSPORT on 23rd November, that he would not be surprised if West Ham United sacked Slaven Bilic. The former West Ham striker said: “There’s a bit of ill feeling around the club. I think the problem Bilic and West Ham have got is that they overachieved last season. They are under pressure.

“Would I be surprised if West Ham decided to change it? No. Would I be disappointed? Yes, of course. But it’s a result business.” hitc.com

How would you feel if Slaven Bilic lost his job? Who would you want to replace him should it happen? Who would realistically come if we did need a new manager?

David Gold responds on Twitter when asked who is to blame for West Ham’s summer signings.

West Ham United co-chairman David Gold has taken to Twitter to state that everybody is accountable for the club’s summer signings – but maintains that this is the strongest squad they’ve had in some time. Many fans feel that the summer recruitment is to blame, as West Ham brought in a whole raft of players, with few of them making any sort of impact so far.  One fan sent a message to co-chairman David Gold asking who is to blame for the poor recruitment – and Gold suggested that everybody, such as David Sullivan and manager Bilic – are all to blame, but he still claims that this is the strongest squad West Ham have had in years, meaning they should be performing better than they are.

‘We are all accountable. However we still have one of the best squad of player at the club than we have had for some time. dg’ hitc.com

Who is responsible for the poor deals we made in the summer? The manager? The board? Tony Henry? Our scouting team?

West Ham reportedly wish to sign Daniel Sturridge on loan in January before landing him permanently from Liverpool in the summer. Express Sport understands the Hammers are front runners to land the England international.

Slaven Bilic is desperate for firepower upfront with his position at the London Stadium also coming under increasing pressure. And according to website The West Ham Way, the Hammers will ideally look to secure Sturridge on a temporary basis this term, then buy him afterwards. The east London club’s history of injury problems upfront, including former Liverpool forward Andy Carroll, makes them reluctant to commit immediately to the Reds striker. Sturridge’s Merseyside career has been blighted by problems, but he has shown he is a proven Premier League goalscorer. express.co.uk

Is ‘The West Ham Way correct’? 😉 Will we look for a loan deal to start with? Is that the correct thing to do?

The Juventus striker was watched by Hammers scouts when he played for Croatia in the friendly with Northern Ireland during the international break. Slaven Bilic worked with the 30-year-old when he was national coach of his country and wants to be reunited with him. Mandzukic has two-and-a-half years left on his Juve deal and could cost £18million to prise him away from the Serie A giants. thesun.co.uk

Is Mandzukic possible the answer? Loan or permanent deal? Can we get him?

Aaron Cresswell is determined to build on his England experience by helping West Ham United move back up the Premier League table over the coming weeks. Fresh from making his Three Lions debut in the 2-2 friendly draw with Spain, left-back Cresswell is well aware that the Hammers need to turn their form around with fixtures against Manchester United, Arsenal and Liverpool around the corner.

Having come so close to getting the result they craved at Tottenham Hotspur last weekend, the former Ipswich man is convinced better times are just around the corner. whufc.com

Marlon Harewood will never forget his last ever game for West Ham United. In fact, 13 May 2007 will always be remembered by everyone associated with the club as it was the day Carlos Tevez scored the winning goal against Manchester United to keep the Hammers in the Premier League. Alan Curbishley’s side somehow managed to win seven of their last nine games to stay in the top flight which was labelled the ‘Great Escape’.

Harewood says he will always remember the memorable celebrations which took place on the pitch and the incredible team-spirit which saw them defy all the odds to retain their top flight status. The 1-0 victory was the last time the Hammers manage to secure a victory at Old Trafford and Harewood says he would love to see a similar outcome when the two teams meet on Sunday…. whufc.com

What do you think of our chances at Old Trafford? If you could get only one win, would you prefer to win in the league or the cup?