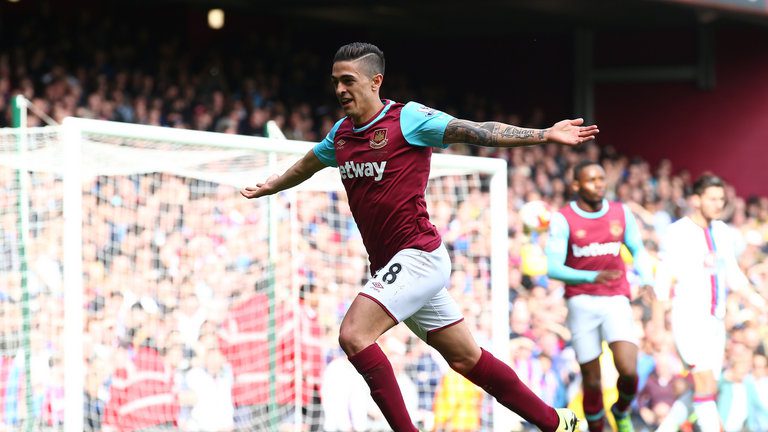 West Ham manager Slaven Bilic sat down with the media to preview the first of his side’s two matches against Manchester United in the space of four days. The Hammers take on Jose Mourinho’s outfit at Old Trafford in the Premier League on Sunday afternoon and the boss was keen for his squad to move on from last weekend’s defeat to Spurs.

The Croatian also gave an update on Pedro Obiang, spoke about Winston Reid as well as discussing his relationship with the Club’s owners. whufc.com

West Ham manager Slaven Bilic has hinted that he may change his system to cover for the absent Winston Reid in Sunday’s trip to Manchester United. The New Zealand centre-back received a second suspension of the season when he was sent off in injury time during West Ham’s 3-2 defeat to Tottenham.

Recent weeks have seen Bilic resort to the back three he employed to some success last season, partnering midfielder Cheikhou Kouyate with Reid and Angelo Ogbonna. Whilst James Collins would make a like-for-like switch the West Ham boss suggested that the absence of his vice-captain may prompt a change in system. standard.co.uk

How do you think Reid’s absence will affect the team? How big a miss will he be? Will Collins come in for Reid in a straight swap? Håvard Nordtveit? Or will we change formation?

Bilic takes his side to Old Trafford twice in the next five days, in the Premier League on Sunday and the EFL Cup quarter-finals next Wednesday, and is likely to be afforded a hot reception after his assertion that Mourinho is not achieving the success he once was.

“Jose Mourinho is one of the greatest,” Bilic told the BBC. “Statistically at home, there is probably no-one better. But it’s hard to stay at that standard and maybe that has dropped now.” fourfourtwo.com

Is Bilic correct in saying that Mourinho is not as good a manager now as he was? Is he still good enough to put out a team to beat us though? What are your thoughts on ‘the special one’?

Bilic: I understand why there has been speculation over my future.

“The defeat at Tottenham was hard to take. In five years’ time, the memory will still be painful for me. We knew how much this game meant to the fans, as it did for us at the club, and we came so close but in the end we lost. Had we held out and won we would have pulled away from the bottom of the Premier League but, as it is, we are just one place above the bottom three with a tough schedule ahead.

Following the 3-2 defeat at White Hart Lane, there has been speculation about my future. I understand that will happen. I am not a newcomer to this game and neither am I stupid. I know you are judged on the table and the number of points you have. All I am thinking about is how to improve things, to keep our concentration up until the last second and to eliminate those silly mistakes.” standard.co.uk

A fair assessment by Bilic, but as much as we may like him, does he have what it takes to turn things around when we are so under pressure? Do you still have the faith? How much of what has happened this season is our managers fault?

West Ham Tony Cottee: We have nothing to fear at Manchester United.

I know we are in 17th after the defeat, but there are no alarm bells ringing for me and our performance at Tottenham should give us plenty of encouragement ahead of visiting Manchester United twice this week and then Liverpool next month. We’ll go to those places with confidence and we showed last year what we can do on the road. There is nothing for us to be worried about at Old Trafford. We need to be positive like last season in the FA Cup, a game we also should have won.

What will be interesting to see is what team Jose Mourinho puts out for both matches. I’m sure Slaven Bilic will play his best side for the two games. I don’t think we have anything to fear at Old Trafford so I’m going for a 1-1 draw on Sunday and then a shock 2-0 win in the cup on Wednesday. newhamrecorder.co.uk

Two massive games coming up at OT; should we be going there with no fear? Can the players be positive? Are you positive? What do you think the results of the next 2 games will be?

Lanzini ready to showcase his talents at Old Trafford.

Manuel Lanzini believes his team-mates should draw inspiration from playing at Old Trafford on Sunday and hopes they can get their season back on track with another famous win against Manchester United. Lanzini said: “It will be a very difficult game, Manchester United are a big team, so we know it will be difficult but we are confident that the result is going to be positive.

“There are a lot of difficult grounds to go to – Old Trafford is definitely one of the more mystical places to go to. It is world famous, it can be challenging but also inspiring, it is up to us. “I am really looking forward to the game, as a player you always want to play against the biggest teams and test yourself – our game on Sunday is definitely one of those games.”

Another reason why the Hammers have every reason to feel confident is the fact they took an impressive four points against Manchester United in last season’s league fixtures. However, Lanzini is well aware of the dangers that a somewhat resurgent United pose. In particular, the Argentine continued to highlight an area that the Hammers will have to focus on: “It is very important that we cut the supply between Pogba, Mata and Rooney, we need to do that well, then concentrate on our own objectives of playing well and trying to win. “The most important thing is to get points. Once the wins start coming in, we can concentrate on league positions and aiming specific targets.” whufc.com

Can the ‘jewel’ lead the way at Old Trafford and help us secure something from this game? What would your team be? Same as against Tottenham but with Ginge in defence replacing suspended Reid? Or would you find a starting place for Captain Mark Noble?

West Ham’s tough run may be a blessing.

“This is an incredibly tough run of fixtures for West Ham. Tottenham last weekend, Manchester United this. United again in the EFL Cup, then Arsenal, then Liverpool. But sometimes, this can allow you to play with a bit more freedom. Nobody expects you to win the games, so it can make you lose your inhibitions as a team. If West Ham can keep the score level at half-time, you can be sure that sections of the Old Trafford crowd will turn against their team.” standard.co.uk

Is our tough run a blessing? How do you see our chances over the next 4 games? What would be the minimum realistic amount of points you think we will get? What about the cup, will we progress any further?

Michail Antonio on gangs, goals and grabbing life by the balls.

Michail Antonio’s non-league career came to an abrupt end. Eight years ago, the powerful West Ham winger was a raw 18-year-old, playing for local side Tooting & Mitcham in the Isthmian League, part of the seventh tier of English football. His performances had caught the eye of Reading, however, and the Royals had signed Antonio and loaned him back to south London as a much-improved player. Training daily with the Championship team, not just Tuesdays and Thursdays, worked wonders with his touch and decision-making. But the presence of a professional in the amateur and semi-pro ranks attracted some hostile attention.

“It was the last game I played,” says Antonio, recalling a 2-2 draw with Hendon, and a sequence that plays out a bit like Cameroon’s famous assault on Claudio Caniggia at the 1990 World Cup. He claps his hands together to mark out the beat of each missed tackle, his voice incredulous. “I’ve picked it up in the middle, someone has chopped me in half, and then I’ve got it back again because, to be honest, I was used to those tackles anyway. Got it again – I’ve beat one, I’ve knocked it down the line. The ball is 10 yards ahead of me, the guy has come for me! He’s tried to scissor me in half, so I’ve hurdled over him, run down the line, I’ve cut inside another person. The ball is two yards ahead of me, he’s come for my body – I’ve hurdled him and scored.

“At the end of the game, I’ve got a phone call from Reading: ‘You’re coming back. One of our scouts was at the game, and we can’t let you stay there. You’re going to get seriously hurt.’” sport-magazine.co.uk

The 19-year-old played just 70 minutes of Championship football for Rovers, and an hour in the EFL Cup defeat to Leeds, before Coyle took the decision to end the loan spell following a chat with the winger. Coyle said Samuelsen, and his family, felt he should be playing more regularly for the club, with the manager stating that no-one has a guaranteed place in his starting line-up.

“I cut the loan short,” Coyle revealed. “It’s very simple, Martin is a lovely young man, a talented man, but I think there was pressure from his family through to Martin who felt he should he starting every week in our team. “We had a really good chat about it, I told him very honestly that I can’t guarantee with any player that they are going to start every week.  “We both felt that it would be in his interests to go back to West Ham, play some games for the under-23s, which he can do until January, and then kick on from there. “I do believe that in time Martin will have a very good career, he’s a talented player. ” lancashiretelegraph.co.uk

What happens with Samuelsen now? Is it realistic to expect a club to loan him and guarantee him a starting spot every week? We wouldn’t do the same with our loan players!

Lazio have competition for Polish international Kamil Grosicki, if a report from Poland is to be trusted. It appears that West Ham have joined the race for the Stade Rennais star according to Polish paper PS, (via Sportowefakty). The 28-year-old came very close to agreeing terms with Burnley in summer, only for the move to crash and burn at the end of the window. calciomercato.com