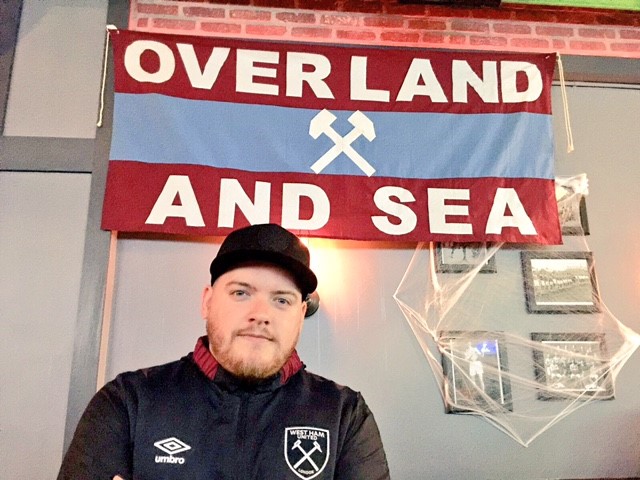 Vocalist of the Band ‘COPE’ (@copetheband)

As we all know, to support our beloved West Ham we go through emotional rollercoasters…but we also all know, that we wouldn’t have it any other way. Because, it truly is, the West Ham Way.

One disposition I often come across with football fans in general, is, ‘you can’t be a true or proper supporter if you weren’t born and bred in the area’. I find this to be absolute nonsense, because as the great Alvin Martin said; ‘You don’t become a West Ham fan because of the glory, you become a West Ham fan because you are born in to it and whilst it’s painful at times, that’s what makes us so strong, really strong’.

Like many others, I support West Ham because of parental guidance! Being taken to a game and instantly falling in love with not just the team or the club, but the whole experience of ‘game day’. It is like no other sport. But whilst I was lucky enough to be taken to games as a kid, and as often as we could afford to through the years, we never lived in London…in fact, I was born and raised in Devon & Hampshire…does that not make me a true supporter? Am I not a fan? Of course, I find it ridiculous to think not, which is why I personally think that anyone who even checks the score, buys a kit from the club shop, or watches the game on TV wanting the Hammers to win, is indeed, a supporter of the club. Why would we dismiss any person who cheers our team on?

Last month I travelled to New York City (my fourth time) with my other half, we actually got hitched in Central Park! Whilst there, I didn’t want to miss watching the game (vs Everton) so I joined the NYC Hammers supporters club where they watch all the West Ham games which was at a bar called Smithfield Hall in Midtown Manhattan. The bar was in most ways, a typical American sports bar, but the NYC Hammers had put their flags up all over the walls, and for that day even though other games were showing on different screens, that bar was theirs. We walked in to the bar just as the game started, I was so surprised at how many West Ham fans were in there. Being across the pond, I did not expect 25-30 West Ham shirts to be together eyes glued to the screens, but when I walked in, it was if they knew we were English, and we were welcomed straight away to their little supporters unit…and of course, even though it was only around 10:30am, I had a pint of Stella in my hand, along with the rest of those there. We sang songs, the passion was the same, and I forgot I was in the concrete jungle of Manhattan, it literally felt like I could have been down Green Street or in The Boleyn Tavern. These were West Ham supporters, regardless of location…It was an experience in its own just to be there, but also was like meeting anyone in the bar before a game. The same anticipation, the same excitement, the same vocals…it was brilliant, even if the result didn’t go our way.

There are supporters clubs all over the world for West Ham, and I can only imagine that they are all similar to the NYC Hammers, I’m sure most of them would do whatever they could to be there in person, in London on game day, or away. I admire their passion and dedication. I welcome their support and love for the club we feel exactly the same about. It was great to share that day with them, and next time I’m in New York I will visit them again.

Now that I have been living in London for the last few years, and whilst I am on the infinite length of a waiting list for a season ticket, I try and get to as many games as I can…and I am grateful each time I get a ticket and make the absolute most of it.

Whilst I miss The Boleyn (so much), I am grateful that I have a better chance of getting a ticket this season! Hopefully the teething problems iron out throughout this first season in the London Stadium as we settle in and make it our home, we all have many opinions on this stadium move which have been covered in plenty on TWHW/SDCC radio show and on the forums, but it is up to US, the supporters to make the atmosphere, to make it a fortress. And, that is exactly what it will be…

This Saturday we have a big game against Arsenal, and it is also TWHW launch event at the East Ham Working Man’s Club, you can get tickets here: http://www.thewesthamway.com/2016/11/15/the-west-ham-way-events-launch-3rd-december-2016/

I will be there, and at the game also…it’s looking like its going to be one hell of a day! Hope to see you all there, and thank you for reading.