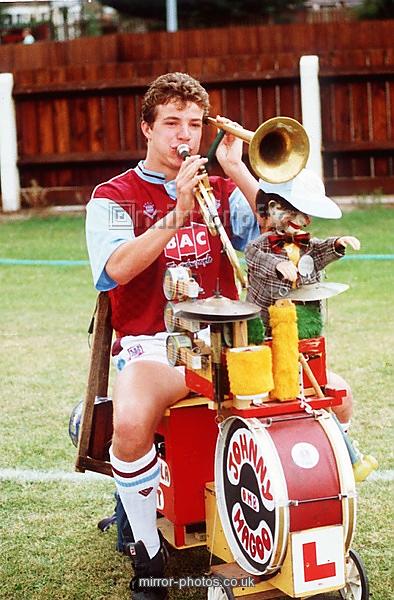 So Saturday was a really mixed day for me. I was really nervous about our first event and making sure it was a success and likewise about how the team were to play that evening too.

Let’s talk about the negative one first. I thought the performance was terrible and that is being polite. I felt too many players were not interested and seemed very off the pace. I was watching certain players who were amazing last year such as Lanzini and Payet and they just seemed really slow, unfit and half hearted. Lanzini tried hard but just didn’t seem as sharp as he had done and this could be said for a lot of other players too. I find it even more concerning now following Bilic’s post-match press conference where he has said the players are not applying themselves in training either. This is the manager and coaching staff’s jobs to insure that they are and to publically admit that seems a very risky move.

I think the board back Bilic; he will be given a few games yet but this cannot go on much longer. The reasonable time to judge will be after the Boxing Day result against Swansea but a decision should be made in my eyes by then. If a new manager is to come in, you need to give him the January window to bring in his own men, something the likes of Mancini (one of the top names in the mix) would wish to do.   Bilic is theirs and my man for now however.

The season has been a major disappointment as everyone involved with the club would admit. There has been mistakes made at all levels from the very top to the players. The board know that mistakes have been made around the stadium and some of the signings in the summer. For me the two main ones are coming out early and saying we will sign a £30m forward raised expectations really high at the start and unless this was delivered there was always going to be a negative view of the window. I also think mistakes at the stadium were made with seating/standing and the PR around that, the segregation of away fans and a failure to make the ground feel like West Ham.

Mistakes have been made by the manager. Many like to blame the board for some of the transfers and yes they have made mistakes but the manager has far more say then some would like to believe. The likes of Tore, Zaza and Ayew were all deals that Slaven Bilic was very keen on.   Some of arguably the more successful signings: Masuaku (debateable in success), Fletcher and Fernandes were Tony Henry’s finds. So I think an equal share of the blame can be made.

The decision to play Antonio at right back at the start of the season has been more devastating than many would think too. He clearly wasn’t a right back, everyone around the club clearly felt that except the manager and we lost too many goals because of this decision at the start of the year which in turn had a knock on effect on the confidence and the player’s trust in the managers decisions as well as missing out on a number of signings who could play there. It feels like Slaven has a lot more doubters within the ranks this year than before. I like Slaven and I want him to succeed, I really do, I hope he turns this around.

Another big factor is the players. I think some got carried away with their successes last year and summer tournaments and have not applied themselves as much as they did last year where the spirt of the Boleyn seemed to motivate many of them. Also whilst it isn’t their fault directly the injuries have been crippling. Look at the players not available against Arsenal: Kouyate, Byram, Antonio, Cresswell, Oxford, Calleri, Tore, Carroll and Ayew (to start) and this has been the number for most games (I also forgot Sakho when I first wrote this). The fact that Arbeloa, a player who looks certain to be on his way out, got on the bench and then played shows the injury situation. The loss of Cresswell, Kouyate and Antonio would affect most teams in the league too.

I think negative press has also been a factor. Yes, we have created some of the negative news ourselves but the media has seemed hell bent on focusing on the stadium flaws and the fans’ fighting even though similar incidents at other clubs does not get reported. Even in the week when Ayew was deliberately “rested” and put on an intensive fitness campaign to get back to the standards we expected from him there were stories of a “bust up” with Bilic and Payet not celebrating his goal because of it, which wasn’t true.

The club plan to sign players in January and have an extensive list at the moment but I guess the list could change if the manager does likewise the list of possible departures too. Some of the names on there are really exciting and people are confident many will be keen to join, although the league position could be a huge factor. Forward and right back being the key position. Everyone feels disappointed at the club and everyone needs to do all they can to turn it around. What Bilic said yesterday about the training could be inspired or could really come back to haunt him.

On to more positive things. Our West Ham Way Pre Match event was a real success and we were delighted to see so many of you back at our home of Upton Park at the East London Working Man’s club and enjoying a traditional West Ham event. Mark Ward, who will be the host at every event, was brilliant and we have received nothing but positive comments about him and Frank McAvennie and the event as a whole. The aim of the events it to keep the traditions of the club alive and this is something myself, SDCC and Mark Ward are especially passionate about.

There are learning curves for us as this was the first event and we intend to make each event better and better. We will be making small tweaks to insure that this does happen. Thank you to all those that have taken the time to give us the feedback and we look forward to seeing you again at the next event. These events will take place before every home game that is on a weekend or bank holiday but not midweek. Our next event is on the 17th of December before the Hull City game at 11-2pm and my first ever favourite players and hero of our FA ,up Quarter Final win against Everton, Stuart Slater, will be the guest with Mark Ward. We will have many great prizes for our raffle and a chance to mingle with celebrity West Ham fans, Hammerettes and true loyal and passionate fans! Tickets are now on sale here: http://bit.ly/TWHWTICKET2

Let’s hope we can have some positive news this week at the club and the players come into training with greater determination to turn this around.