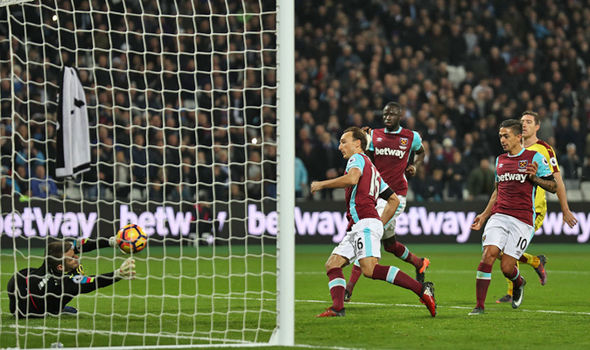 West Ham defeated Burnley FC this evening 1-0 in a mid-week Premier League fixture at the London Stadium.  Safe to say that no true West Ham supporter would have predicted that the first Christmas season at the new grounds would feature a home club only a single point from the bottom three of the table.   The visiting Clarets came into the day in a slightly safer position; a full three points ahead of West Ham.

As Slaven Bilic has been forced to manage a number of prominent injuries during the early months of the season, he came to this day with a decent selection of attacking options, as Andy Carroll returned to the starting lineup.  Both teams came with some momentum behind them, as West Ham took a single point away from Anfield on Sunday and Burnley earned a 3-2 victory over Bournemouth.

Sean Dyche’s side opened the match showing stout defending.  While the Hammers controlled possession, Burnley managed to keep Tom Heaton protected.  West Ham had two strikes hit the post during the opening 45, but neither team found a first half goal.

The most remarkable part of the opening half was the number of times (five) Bobby Madley stopped play for head injuries, and the downed player miraculously would return to action immediately.

During the two minutes of added time to the first half, a corner kick fell to Winston Reid who was taken to the turf by Ben Mee.  With the penalty kick called, Mark Noble marched to the spot and his kick was first blocked by Heaton but Noble was able to score off the rebound. West Ham walked off the pitch with a 1-0 lead.

During the second half, Burnley showed some danger on a couple of free kicks from just beyond the penalty area.   In the 55th Sam Vokes barely hooked one wide.  In the 61st somehow Vokes managed to head over the crossbar on an open opportunity.  In the 72nd Darren Randolph had to dive into a crowd to swat away Scott Arfield’s free kick.

West Ham did have moments.  In the 60th Andy Carroll took a Payet corner kick straight into the arms of Heaton.   Moments later Lanzini had his long-range shot also find its way to Heaton’s arms.

Late in the match Dyche brought on more attacking options and the home club found themselves trying to hang on for a 1-0 victory.   The London Stadium patrons groaned when the five minutes of added time was announced but through a combination of possession and a little luck (and some great efforts by Darren Randolph) West Ham were able to walk away with all three points.

A busy week concludes on Saturday when the Hammers host fellow struggling side, Hull City.  After a brutal run of top competition, a few matches against the bottom of the table are welcome as Slaven Bilic looks to pull his team away from the danger of relegation zone.  40 points is usually thought of as the safety point at season’s end.  A victory against Hull will go a long way to easing the concern of the supporters.

With a lot of football to be played between now and May, a healing West Ham side can still be a dangerous team as we go into 2017.  Club goals such as a run in the Euro’s, a top five finish, and even a League Cup are all gone, but a confident club going into the new year will, no doubt, improve the feeling in East London.   Stay tuned to the West Ham Way as Ex and staff have all the latest news and information on the January transfer window.