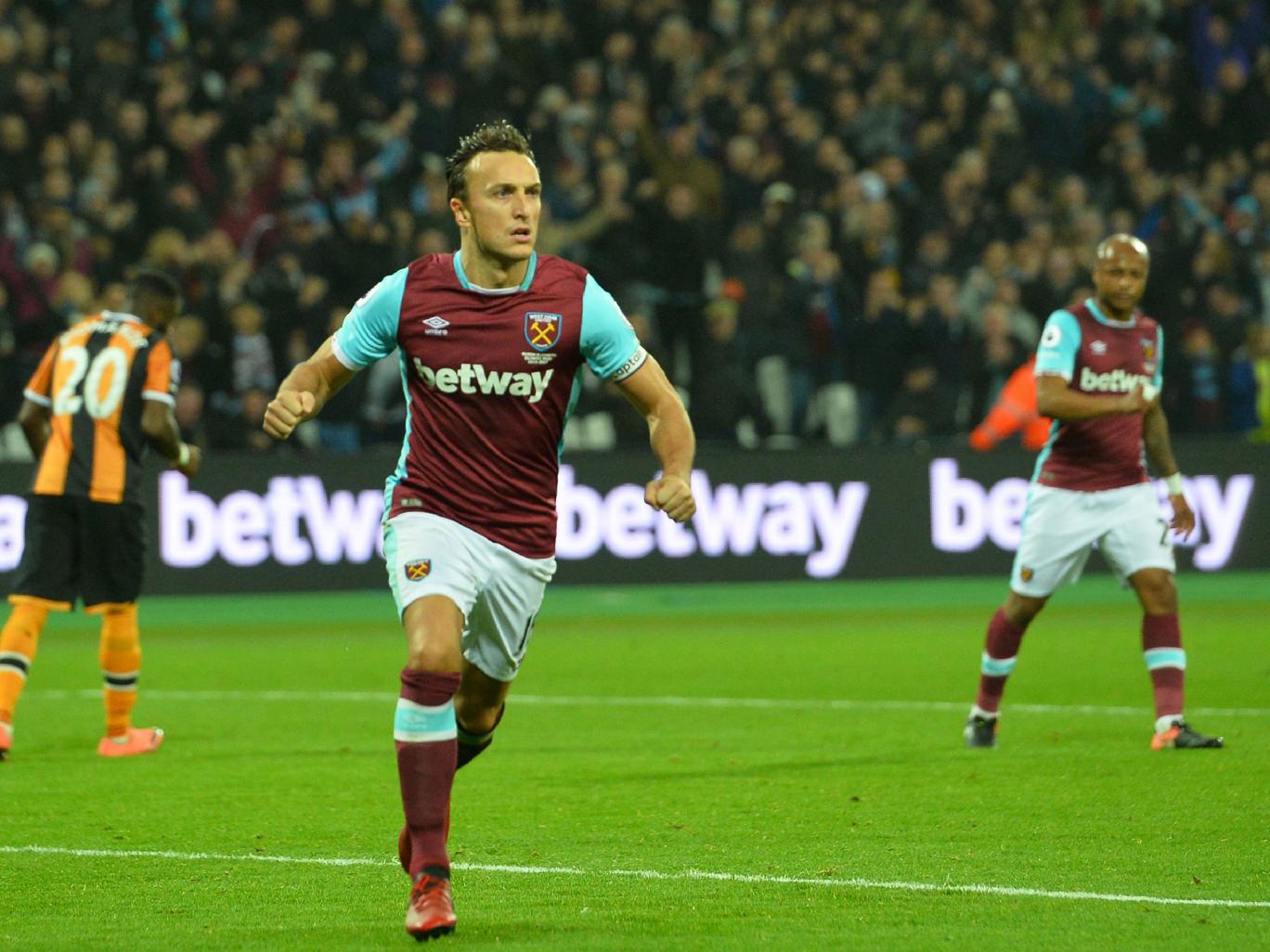 West Ham defeated Hull City today, 1-0 in a Saturday afternoon match at the London Stadium.  Both teams arrived after a busy week of matches sitting on the wrong end of the table.  But a sloppy 1-0 victory against Burnley gave the hosts a bit of momentum to work off of as Christmas approaches.

Both sides employed a wingback formation with three in the back.  Slaven Bilic used the same starting eleven as he did during his midweek victory over Burnley.  In the early going West Ham was the aggressor with possession.  During the first ten minutes Hull keeper, David Marshall, was under pressure.  Only five minutes in he appeared to pull up with a thigh injury but after attention by the physio he remained in goal.

Dieumerci Mbokani had an early chance to take the lead.  19 minutes in he was only a yard wide of goal on a tight shot.  A minute later, the London Stadium crowd gasped as Aaron Cresswell’s uncharacteristically weak backpass to Darren Randolph was short, and Mbokani took on the Hammer’s goalkeeper one-on-one.  Miraculously his open goal shot only hit the post.

The final moments of the opening half were all Hull.  Livermore, Maguire, and Mbokani all had chances to take the lead.  West Ham seemed to oblige Mike Phelan’s side by giving up possession multiple times in the midfield.  Hull showed stout defending and seemed resolve in not giving Andy Carroll any chance to damage them on set plays.

After three minutes of added time, the first half ended with a 0-0 score.  One bit of first half damage was Lee Mason’s booking Pedro Obiang.  This yellow card earned the Spaniard a suspension during the Boxing Day match at Swansea.

As the second half opened, Bilic made formation changes bringing on Ayew and Fernandes for Lanzini and Obiang respectively.  Placing Kouyate at right back, he hoped to spread the field a bit but the unintended consequence was a wide open midfield that gave Hull free reign to counterattack unimpeded.  Fortunately luck was on West Ham’s side.

Disaster almost struck the Hammers when a Mark Noble header to clear a Robertson cross hit his own post, barely missing a 1-0 own goal.  A moment later,  Robertson hit the post again.  The drama and back-and-forth of the play were unexpected for a 0-0 match between two bottom of table clubs.

Finally in the 75th West Ham received their opportunity when Michail Antonio was brought down in the penalty area by Tom Huddlestone and the home club was awarded a spot kick.  With less drama than Wednesday, captain Mark Noble took care of business and the Hammers had their 1-0 lead.

Just like Wednesday’s match West Ham had some scares and opportunities but managed to hang on for the narrow and sloppy victory. With three matches in seven days, Bilic’s side has a break to heal up prior to the Boxing Day journey to Swansea.  Despite the poor and disjointed showing for two consecutive matches, the Hammers did take seven points from three matches, including an impressive point at Anfield.

Hopefully Bilic and company will find some answers as this team continues to climb towards safety.  Historically, this club hasn’t found great answers in the January transfer window so a return to consistent form will probably have to come from within the current roster.

Keep reading the West Ham Way for all the latest transfer news.