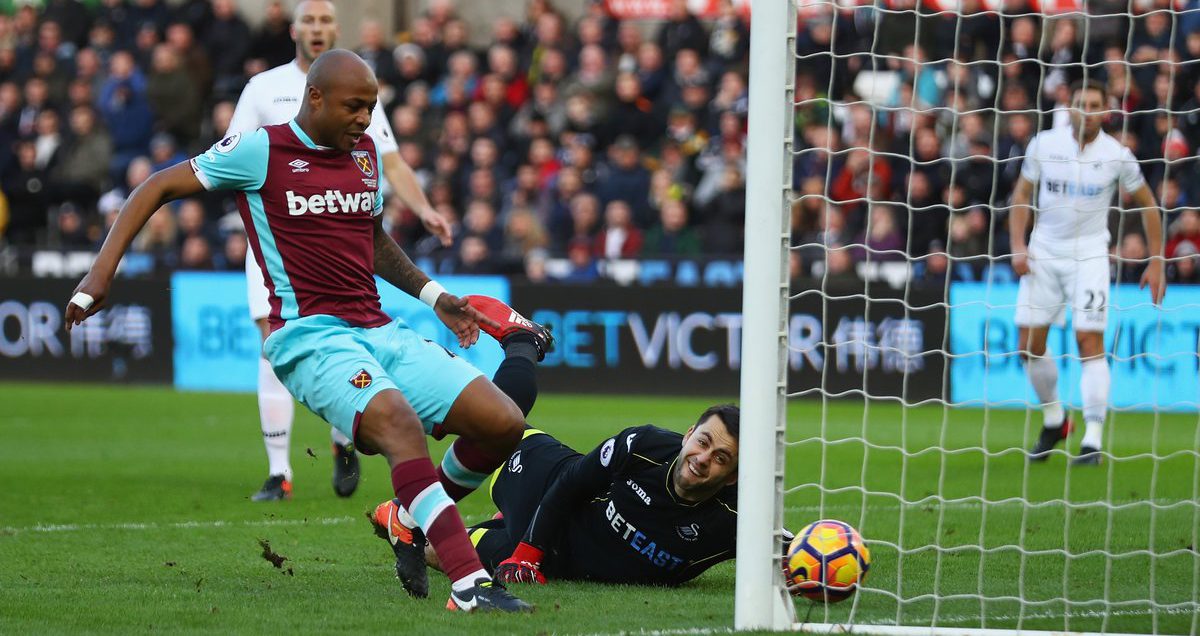 Good evening.
Here is a round-up of West Ham related stories gathered from newspapers and the internet on Monday 26/12/16. Thank you for reading. I hope you are enjoying your Boxing day 🙂

Record signing Andre Ayew returned to haunt former club Swansea City by setting West Ham United on their way to a thumping 4-1 Boxing Day victory. The Ghana forward, signed from the Swans for £20.6m in August, opened scoring on 13 minutes at the Liberty Stadium, before Winston Reid, Michail Antonio and Andy Carroll completed a superb Christmas with goals after half-time.

The Hammers’ victory was their first in five attempts at Swansea’s new home, their first Boxing Day win since 2009, and lifted Slaven Bilic’s side to eleventh in the Premier League table. whufc.com

West Ham turned up the heat on embattled Swansea manager Bob Bradley with a 4-1 win at the Liberty Stadium. Andre Ayew – with his first Hammers goal following his £20.5million move from Swansea in August – Winston Reid, Michail Antonio and Andy Carroll helped the Londoners claim a third successive win for the first time since March.

Fernando Llorente, on as a substitute, claimed a Swansea consolation two minutes from time with his fifth goal in six games, but even then Carroll had the final word. standard.co.uk

“I think it was important to get the goal for the squad and to get my first goal here,” said Ayew. “I started the season in a very difficult way, but I’m trying to get back into my best shape. “Things are getting better now and the boys are helping me, pushing me every day and I’m getting my confidence back. We had a great game today and hopefully we can continue like that.”

“Personally, I think it was an important goal for me, but collectively it was our third win and we’ve done really well in the last few games,” said Ayew. “We didn’t play our best football in the previous two games, but I think we managed to get two clean sheets and win those games. “Today we played better football, but I think we can do even better with the ball. We’ve proved that we’ve got a good squad and if we keep working hard then we can get more results.”  whufc.com

West Ham have targeted Brentford striker Scott Hogan who, like Vardy, has risen from non-league football. Hogan, 24, has scored 13 goals in 23 Championship games after once playing alongside Vardy at Halifax and similar spells at the likes of Woodley Sports, Mossley, Stocksbridge Park Steels, Ashton United and Hyde.

Do you think we should try for Bacca again? How about Hogan from Brentford? Is he worth a gamble

Hammers need to clear out the summer flops to save season.

West Ham’s first year in the London Stadium has been dismal so far and they need to get busy in the January transfer window to turn their season around. dailystar.co.uk

Slaven Bilic sees cause for optimism but West Ham are still struggling to click.

The manager is yet to find a formula that incorporates the talents of Dimitri Payet and his string of summer signings into a coherent collective. theguardian.com

Andy Carroll set for West Ham stay as Slaven Bilic insists striker is not for sale.

West Ham intend to resist any bids for Andy Carroll when the transfer window reopens because of their striker crisis. The fit-again frontman is set to lead the line for the club over the next three games in six days with Diafra Sakho injured.Flop Italy striker Simone Zaza is set to have his loan terminated when the window reopens with Valencia willing to snap him up.

It means the Hammers are pinning their hopes on Carroll to help them through the next few weeks until they can bring in the reinforcements they have urgently targeted. mirror.co.uk

How do you rate Andy Carroll? How vital is his contribution to our team?

WEST HAM manager Slaven Bilic believes opposite number Bob Bradley is under no more pressure than any other Premier League boss. express.co.uk

David Moyes has told West Ham to forget about making a new year move for Jermain Defoe — and says his star striker is ‘priceless’. The 34-year-old has scored 19 times in 2016 and, without his goals, Sunderland would have been relegated last season. Indeed, his eight strikes this term are the only reason they are still in with a shout of survival — and Moyes knows it. dailymail.co.uk

Do you think Defoe could be available at the right price? How much would be too much?

Ashley Fletcher opens up about ‘positive’ move from Manchester United and his aims for the future.

The striker is clearly benefiting from first-team football at West Ham, with Fletcher telling Standard Sport he has already learned much off his teammates Andy Carroll and Dimitri Payet in his first six months at the club.

In our exclusive chat with the 21-year-old, he also reveals how much Bilic has boosted his confidence since his move to London and states his ambitions for the future at West Ham. standard.co.uk

West Ham are being targeted by energy drinks giant Red Bull as they bid to add to their portfolio of football teams around the world by buying an English club. SunSport understands they are targeting West Ham because of its location in the capital and the iconic venue.

The stadium was re-branded the London Stadium for football when the Hammers moved there this summer with a view to eventually selling-off naming rights. Branding, naming rights and marketing have been Red Bull’s main motivation when acquiring clubs despite their financial clout resulting in major success on the pitch too. thesun.co.uk

Red Bull has dismissed reports it is interested in buying West Ham, while the east London club’s owners have told BBC Sport they are not looking for investors.  It had been reported that the energy drinks giant was considering a £200m offer for the Premier League club.

Sullivan and Gold bought a majority stake in West Ham in 2010 in a deal that valued the club at £105m. Between them they now own more than 85% of the club. Since August’s move to London Stadium, West Ham have also been linked with takeovers from Qatari and Chinese groups. Last year Sullivan said it was possible a minority shareholding could be sold to clear debts but that he and Gold intended the ownership to pass on to their children. bbc.com

What are your feelings about a takeover? Is it inevitable? Do we need a major cash injection if we really are to push on and really improve? Or can we do it the way we operate now?

After taking seven points from our last three games we all know the importance of getting another positive result when we face Swansea today. A lot has been said about the performance against Hull in the last game and I’m hoping to see us more fluid with the ball and have more movement off the ball. We need to take more responsibility. It has nothing to do with fitness, nothing to do with a game plan, but has a lot to do with the freedom in your head or in your legs of course. whufc.com