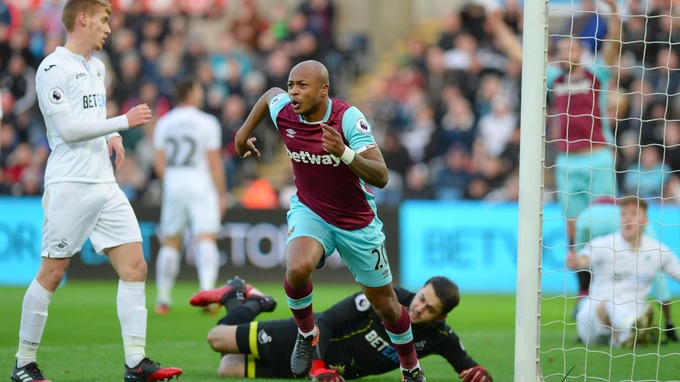 Record signing Andre Ayew returned to haunt his former club Swansea City by setting the Hammers on their way to a thumping 4-1 Boxing Day victory this afternoon.

The Ghanaian forward, signed for just over £20m in August showed his first flashes of quality today by opening the scoring on 13 minutes at the Liberty Stadium, before Winston Reid, Michail Antonio and Andy Carroll completed a superb rout of the Welsh side.

The Hammers’ victory was their first in five attempts at Swansea’s new home, their first Boxing Day win since 2009, and lifted Slaven Bilic’s side to eleventh in the Premier League table.

Ayew’s opener arrived in opportunist style, with him tapping home after Lukasz Fabianski had failed to deal with Andy Carroll’s knock-down from a diagonal Mark Noble pass. The strike came after the home side had started the brighter, with Alfie Mawson heading wide from their first corner before Borja Baston curled off-target rather than playing in the unmarked Gylfi Sigurdsson.

Having gone ahead, West Ham edged the remainder of the first half, although Swansea arguably created the better chances. For the visitors, Ayew flicked a Dimitri Payet cross just beyond the flying Michail Antonio at the far post, Payet himself seeing a shot held by Fabianski.

As half-time approached, Swansea threatened again, but Sigurdsson first sliced a left-foot shot out for a throw-in, then saw Darren Randolph plunge to his left to push his well-struck free-kick around the post. With chances suddenly flowing, Antonio curled a yard wide of the top corner after collecting the Frenchman’s pass, then Swansea midfielder Jack Cork headed Wayne Routledge’s centre over Randolph’s crossbar, meaning the Hammers went in a goal to the good at the break.

Swansea manager Bob Bradley reacted with a double change at the break, bringing on Fernando Llorente and Jefferson Montero for Borja and Jay Fulton respectively. After again starting brightly, the Swans were again stung by a West Ham goal. Five minutes of the second half had passed when Carroll’s shot was deflected wide and Reid beat two defenders to Payet’s near-post corner to head home.

Perhaps unsurprisingly, Swansea reacted by going on the front foot, with Routledge slicing wide, Randolph making another decent stop to push Cork’s aside and the Irishman then helping Sigurdsson’s looping header over the top. With the home crowd getting increasingly frustrated, West Ham kept possession with increasing confidence and ensured a second away win of 2016/17 when eight-goal leading scorer Antonio diverted Havard Nordtveit’s shot past Fabianski – who had saved from substitute Edmilison Fernandes seconds earlier – with 13 minutes remaining.

The impressive Randolph made smart saves from Angel Rangel and Cork late on, completing a miserable afternoon for Bradley, but was powerless to stop Llorente firing home from Nathan Dyer’s cut-back in the 89th minute.

There was still time though for Carroll to score his fifth in six matches against the Swans, expertly volleying home Sofiane Feghouli’s cross in the final minute in a move that once again Edimilson Fernandes set up.

The Manager will be well impressed with the result today but more importantly how some of his summer signings actually played.  Both Ayew and Nordtveit were outstanding with the latter having probably the best performance of anyone that has played in that dreaded right back position all year.  Not only did he keep one player quiet.  He was so good Bradley had to change things around at HT and bring Montero on to attack the Norwegian down that wing.  He lasted 24 minutes with Havard shutting him out as well. The position has been a nightmare for the Hammers all year and maybe now Slaven has found a player that can excel there and utilise a standard back four which should give our wide players more of an opportunity to stay up the other end of the pitch.